Our look at the horoscope of Donald Trump, a Gemini with Leo rising and Sagittarius moon.

What does GOP candidate Donald Trump’s astrology chart reveal about him? Here’s what the stars have to say. Working the crowd: Gemini Sun in the 10th house

Donald Trump is a Gemini—the clever, fast-talking sign governed by Mercury the messenger. Love him or loathe him, you have to give it to the Donald: The man has coined some snappy soundbites. With his Uranus, ruler of technology, social media and group activity, in his tenth house of public image, it’s no surprise he’s caused such uproars on Twitter and at his own rallies. His Sun is also in the tenth house of status and leadership, in close proximity to Uranus. And while we’re personally hoping he’ll hear #You’reFired this November 8, these placements help him spit out phrases that spread like wildfire through the zeitgeist. Make America Great Again! Crooked Hillary…the list goes on. Unfortunately, his basket of slogans also includes deplorable insults against women, people of color, Muslims, the disabled…and the list goes on. With the Sun in Trump’s tenth house of masculinity, he’s had a lifetime of so-called “locker room talk” and perpetuating a misogyny-riddled boy’s club, which became excruciatingly evident with the leak of his Access Hollywood hot mic “p***y grab” and the entitled behavior he’s passed down to his sons.

With the Sun in Trump’s tenth house of masculinity, he’s had a lifetime of so-called “locker room talk”.

Geminis have a reputation for being double-talkers who twist people’s words and contradict themselves. And while this isn’t the case for ALL people born under this sign (not by a long shot), Trump has proven the stereotype true on several occasions. During the September 26 presidential debate he flatly denied an earlier conversation with ABC News anchor David Muir in which he said, “I just don’t believe she (Clinton) has a presidential look.” Despite his statements being documented, Trump insisted that what he actually said was that Clinton “doesn’t have the stamina” to be President. Then there’s his ever-shifting position on whether or not he supported the Iraq war, his praise for Putin’s “strength”…and those elusive tax returns.

Donald Trump’s Leo rising (or ascendant) colors his appearance and demeanor. Leo rising people are often first spotted by their trademark “manes” of hair. They can be blustery, outspoken and ready to roar. With his notoriously swirled and silky hair and his orange-tinted complexion, Trump even resembles the Cowardly Lion from The Wizard of Oz. And kind of like the Lion went to Oz to find courage, Trump also received a surrogate medal of courage (in his case, a veteran gave him his Purple Heart)—although in Trump’s case, there was no act of bravery performed to earn it. 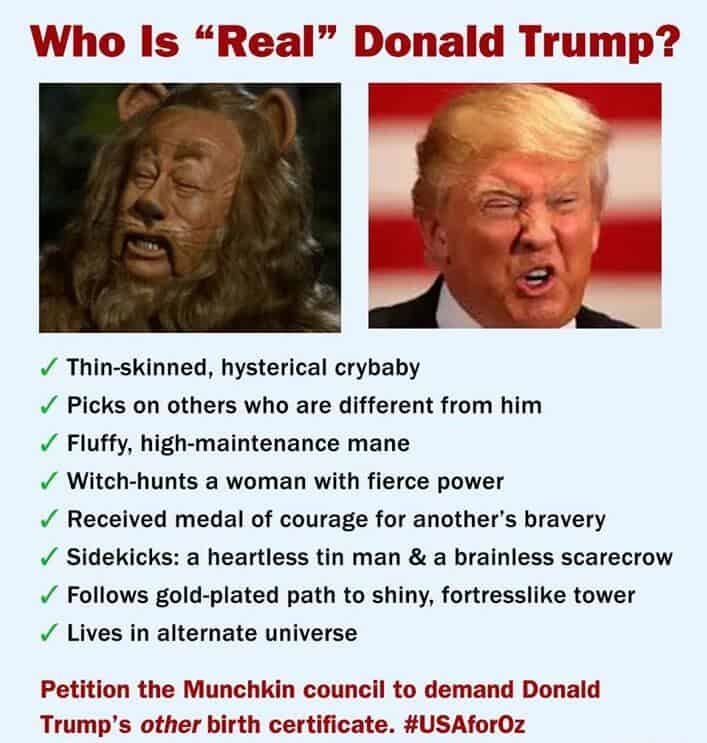 Leo is also the Hollywood sign, owing to Trump’s numerous appearances on shows from The Fresh Prince Of Bel-Air to Spin City. And of course, there was his own successful franchise with The Apprentice and Celebrity Apprentice. He’s certainly not shy when the cameras are rolling—or, ahem, when they aren’t.

The downside of the Leo rising is that it can give more bluster and ego than anything else. However, the Leo rising person can exude a warm, protective energy, which Trump is able to project to his unquestioning followers…until he ruins it all by losing his temper.

The moon sign governs the inner nature: what makes us tick, what moves us emotionally. Trump’s moon sign is in fiery, enterprising Sagittarius—the sign that governs international expansion. Perhaps this is the drive behind his 3.7 billion-dollar empire (taxes paid or not), one that has developments in Panama, Istanbul and elsewhere. Sagittarius is the sign of candor—an outspokenness that can easily lead to “foot in mouth” disease.

This moon sign can be combustible and prone to hotheaded, offensive outbursts. It’s little surprise that Trump has fired off so many controversial and off-color statements in the heat of the moment. His self-regulated Twitter account has become subject of campaign scrutiny and GOP angst—and a guilty addiction for voters of both parties. What will the man say next? This has led many to wonder if someone with such an itchy Twitter finger should have access to another hot button—one that could launch nuclear arms.

Spotlight stealer: North Node and Uranus in the 10th House

Famous or notorious, the spotlight seems to follow Donald Trump. And he has no issue courting it. Uranus, the planet that rules TV, social media and popularity, lands in Trump’s tenth house of leadership, awards and public image. Is it any wonder he’s so obsessed with winning? The tenth house rules duty, men and old-school values, making Trump popular with veterans and a largely white male voter base, many of whom want to turn back time to when America was “great” (if you were a white, middle class male, that is). Uranus is the planet of rebellion, which may explain the outdated and sexist “bro humor” to which Trump is partial, and his gang of old-school male cronies that includes Rudy Giuliani, Roger Ailes and Chris Christie.

This is the chart of someone who wants to be in charge—unapologetically so. However, Trump’s North Node, which reveals his karmic “learning curve,” causes him to flounder on the path. His endless spate of rookie mistakes are as frequent (and jaw-dropping) as his bankruptcies. Yet, his tenth house Uranus keep him inciting anger and rebellion at his rallies, no matter what he says or does. Since Uranus rules “fringe” groups and radical gatherings, it’s no surprise he’s drawn a base of white nationalists and alt-right devotees.

Uranus rules technology, while Gemini is the sign of communication and media. Once again, no surprise “@RealDonaldTrump” has taken to Twitter to settle his many grudges and cast himself as a victim of rigged media and election fraud. With hotheaded, erratic Uranus in the driver’s seat, his unfiltered tweets and commentary have stirred up the controversy this planet and zodiac sign are both famous for. 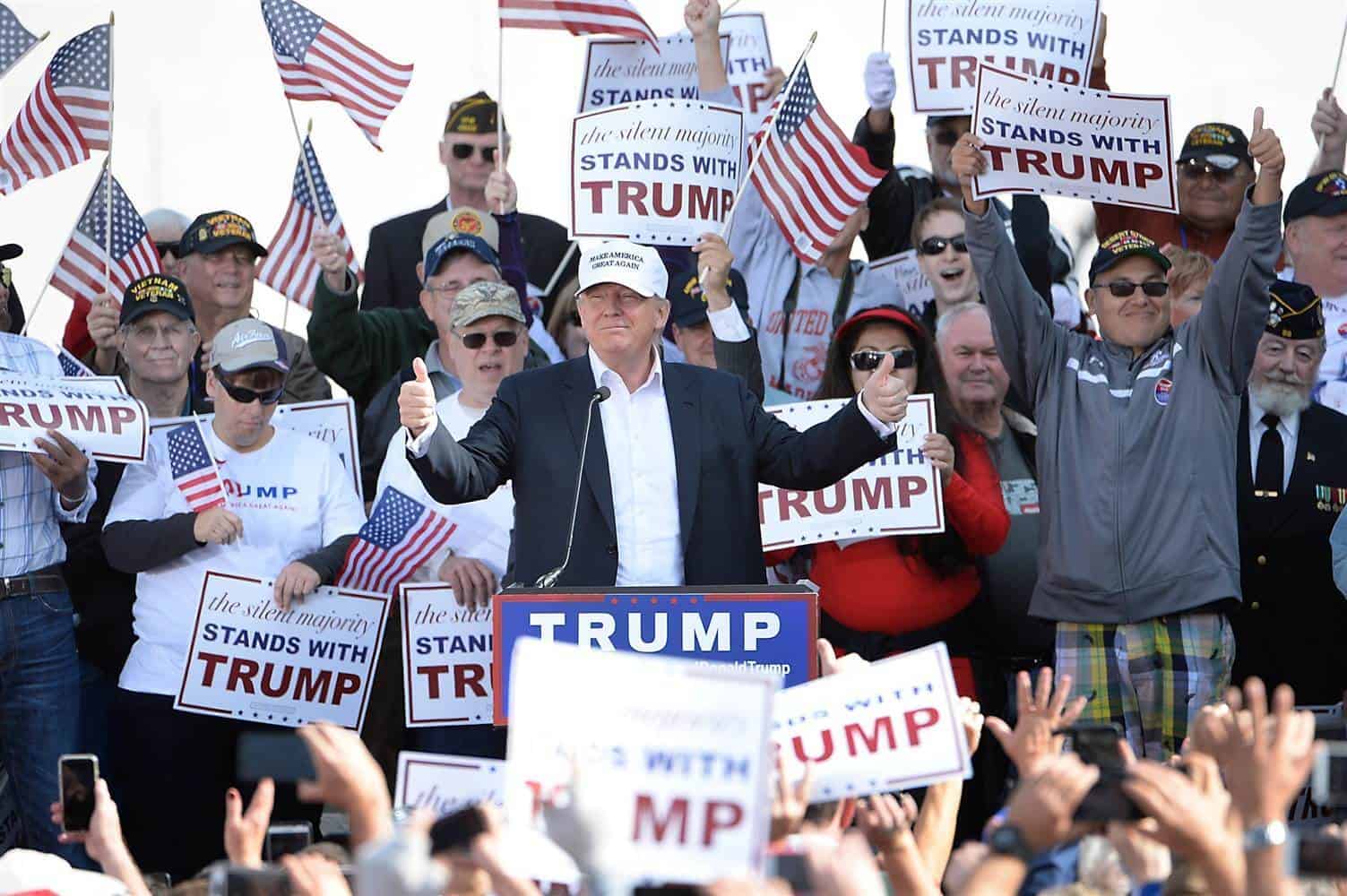 Here’s where the two candidates share a path as both Donald and Hillary were born with a planetary pairing of aggressive Mars and strategic Pluto in Leo—the sign of leaderships. This confidence-boosting placement definitely fares well for someone on a mission to rule the free world. But unchecked, it can easily lead to power trips and even narcissism. The ego is often in the driver’s seat for Mars in Leo people, who thrive on praise and adulation. They are also romantics who love the thrill of the hunt. To wit, Trump has been married three times, all to women who fit the glamorous, photogenic bill that a showy Mars in Leo loves. Trump also has seductive, subterranean Pluto in Leo, which may explain his mysterious allure and “broad shouldered” leadership, as his vice presidential candidate Mike Pence often references reverentially.

Conservative Saturn is mashed up with Venus—the planet that dictates Trump’s views on women—and in the ultra-feminine sign of Cancer, no less. This may partially explain The Donald’s Mad Men era views on women and his adherence to “traditional” gender roles. Venus is all about glamour and eye candy, and Trump can’t seem to stop himself from commenting on a woman’s beauty—or her weight gain. (Cancer governs our eating habits AND feminine curves.)

Saturn is the planet of restriction and in Cancer can point to a rejection of what Carl Jung referred to as the anima—the inner feminine of a man’s personality. There are, in fact, three planets in Cancer in Trump’s chart: Saturn, Venus and messenger Mercury, which may point to some undercover sensitivity being covered up by all that bluster. To wit: His many thin-skinned moments, his feuds with women and his habit of taking everything personally.

Cancer is the sign of hearth and home and domestic security has been a huge topic for the Trump campaign with promises to build a wall to keep out Mexicans, screen Muslims and block Syrian refugees from entering the United States. Cancer is also the sign of all things maternal and here’s something fascinating: Trump’s anti-immigrant rhetoric may be rooted in some serious Mommy issues. The Republican candidate’s own mother, Mary MacLeod Trump, was a Scottish immigrant who came to America in 1929 in search of economic opportunity much like the Mexicans whom Trump so vehemently defiles. Ledgers show her listed as a “maid” and “domestic,” when she arrived on the shores.

In Trump’s words, “Part of the problem I’ve had with women has been in having to compare them to my incredible mother, Mary Trump” whom he’s called “smart as hell.” Mary Trump even shares a star sign, Taurus, with Donald’s third and current wife Melania. Paging Dr. Freud?

Now here’s the grandest cosmic joke: Donald Trump may have been a woman in his past life! The moon’s South Node is the karmic point in the chart, one that determines the soul’s past journey—and Trump’s falls in Sagittarius and the fourth house of femininity, mothers and also real estate. (In swaggering Sagittarius, he was no English rose the last go ’round!)

Trump’s constant harping on his masculinity may belie some soul-level insecurity about entering this lifetime as a dude. From getting bent out of shape about the length of his fingers (#TrumpHands anyone?), to inferring that his penis is long enough, to nicknaming opponent Rubio “Little Marco,” Trump has been quite a size queen. And does this explain his refusal to change diapers or do anything domestic? Now, if we could just get him to remember where he came from… 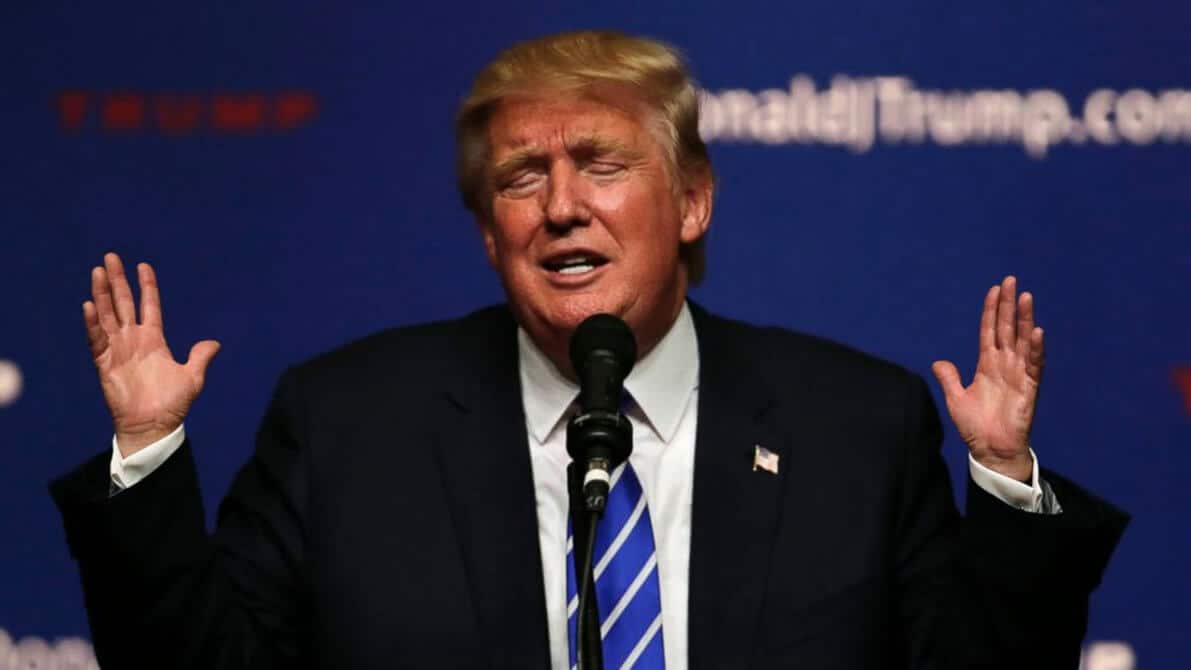 Home and family fall under the fourth house’s domain and Trump has a strong allegiance to his brood. In turn, his kids have taken a strong and supportive stance for their father. Daughter Ivanka is being called “the secret weapon” behind his campaign, touting her father’s paid maternity leave promises and positioning herself as the mouthpiece for modern mothers. His eldest son, Donald Trump Jr., has acted as daddy’s mouthpiece, likening Syrian refugees to Skittles and making tasteless references to “the gas chamber.”

With an ever-expanding Sagittarius South Node in the house that governs real estate, it’s no wonder those Trump Towers keep popping up everywhere.

Gemini is the sign of the Twins, and The Donald has surrounded himself with Gemini signmates, including VP nominee Mike Pence and Rudy Giuliani.

Both Gemini and Virgo are ruled by verbal, analytical Mercury, and Trump’s other close buddy Chris Christie happens to be born under the Virgo Sun sign. With all this Mercurial energy in the air, it’s no wonder the Trump campaign is a lot of talk and not much planning., Mercury-ruled people can play fast-and-loose with their words, making promises that sound good in the moment, but ones they conveniently forget to keep.

Unfortunately, Mike Pence—while having the Gemini gift of polished verbal delivery and talk-show hosting experience—has proven to be equally prone to the negative Gemini trait of lying and denying, tarnishing the good name of the honest and articulate Geminis out there. Pence has his Sun, moon AND verbal Mercury in Gemini, which allowed him to remain composed while denying well-documented Trump-isms at the VP debate. His Saturn in old-school, patriarchal Capricorn explains his archaic views on women’s and gay rights, along with his conservative religious values. And it made everyone with Daddy issues swoon over his debate demeanor—until the bizarre disconnect between style and substance was revealed. Pin
Next up: Read our analysis of Hillary Clinton’s horoscope >