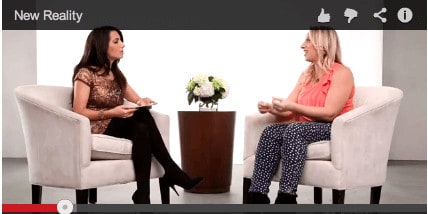 Is December 21, 2012, the end of the world? No, but it IS the end of the world as we know it. Ophira sat down for a chat with Marie Forleo, our fellow Sagittarius friend and creator of the incredible online program B-School. We share 5 great tips for thriving in the post-2012 world. Learn what it means to “bend time,” and discover how the nodes (or destiny points) in your chart can help you discover your ultimate life purpose!

So, what’s December 21, 2012 all about?
A whole new world is upon us as we count down to December 21, 2012. Yep, Friday 12/21/12 is the big day, one that’s been shrouded in lore and apocalyptic legends, the day that a 5,125 year cycle of the Mayan calendar ends and another era begins. Since the human will to live is still strong, we choose to believe this is “the end of the world as we know it,” not a literal Armageddon. In fact, the Mayans call the post-2012 era The World Of The Fifth Sun or The Fifth World. The previous four worlds brought forth minerals, plants, animals then humans. In the Fifth World, humans will be called upon to reharmonize with nature ,as we stop abusing minerals (gold, silver, fossil fuels), restore our connection with nature (global warming, be warned!) and honor our connection to animals. Indeed, we are largely out of sync with nature, so much so that an extended power outage could take us to our knees. While those wacky survivalists might seem like lunatics, maybe they’re onto something. At the very least, it wouldn’t be a bad idea to learn the basics like growing our own food or otherwise living off the land, if for no other reason than to honor our connection to the planet.

As the world shifts, the call for “oneness consciousness” is also being raised. Many of us have been seeing the numbers 11:11 and 1:11 on clocks, addresses, or in other serendipitous places for years, a calling to elevate the spirit of oneness on the planet. Some believe that the number 11 is associated with lightworkers (http://www.angeltherapy.com/article12.php) and that there has been an increase in people who want to elevate the positive vibes here on Earth as we’ve approached December 21. During the transition to this new era, we will see a sharper divide between the lightworkers and the people who are still operating according to material greed and self-interest. How we’ll navigate the balance is yet to be seen, but with the world’s resources dwindling, populations surging, and shifting weather patterns due to global warming, we are going to need to work collectively to keep this planet going!

The Mayans were profound record keepers and mathematicians, both astronomers and astrologers. Another occurrence they predicted for December 21, 2012 was that both the Earth and the Sun would align with the Galactic Center– an event which has not happened for 26,000 years (the time the Ice Age began). The Mayan’s precision boggles the mind, but indeed this alignment is occurring. Just as the Sun is the center of our solar system, the Galactic Center is the gravitational field that the entire Milky Way revolves around! So, this alignment of Earth, Sun, and Galactic Center connects us to worlds beyond our own, fiery and mysterious with an indescribable pull. The systems our modern world revolves around may shift as a result of this stellar and enigmatic alignment. Who knows? Perhaps we’ll even contact life forms in distant galaxies on this fated day.

Also on the 21st, three planets form a “Yod,” which is called “the finger of God” or “the finger of fate” by astrologers. The star players in this mystical trio, Pluto in Capricorn and Saturn in Scorpio, will push their energy down towards Jupiter in Gemini. Pluto and Saturn are in a “mutual reception,” meaning that they are housed in the signs that the other planet rules: Pluto rules Scorpio and Saturn rules Capricorn. Pluto and Scorpio can be destructive forces, transforming structures so the phoenix can rise from the ashes. Saturn and Capricorn are all about power, authority and control–they keep structures in place and ground us by providing the resources we need. Pluto and Saturn are working in tandem to shift the power on the world stage, but bringing some major disruptions in their wake. Fortunately, Jupiter, which is the focus point of this Yod, is in Gemini–the sign of partnerships, duality, cooperation, and kindred spirits. And Jupiter is the planet of international affairs. Whoa! We may see an incredible shift of power going down this week. Will Beyonce’s  words, “Who run the world? Girls!” ring true? Part of the Mayan lore involved the Venus transit this past June 5, when Venus visibly crossed over the Sun, calling forth the divine feminine and awakening women’s power. While a balance of masculine and feminine is the way to keep the world in harmony, the warmongering aggression and violent plays for domination are not exactly doing the trick. Women leaders may come forth or stage a peaceful revolution that rocks the world with its loving vibes. (How awesome would THAT be?!)  It’s worth noting that in the Yod, Saturn, Pluto and Jupiter will all be at 8 degrees, the number associated with infinity and the balance between the material and spiritual worlds. Yes, from a cosmic perspective this day is major. Join us in visualizing a planet bathed in light and love, as we usher in the Fifth World on Friday.