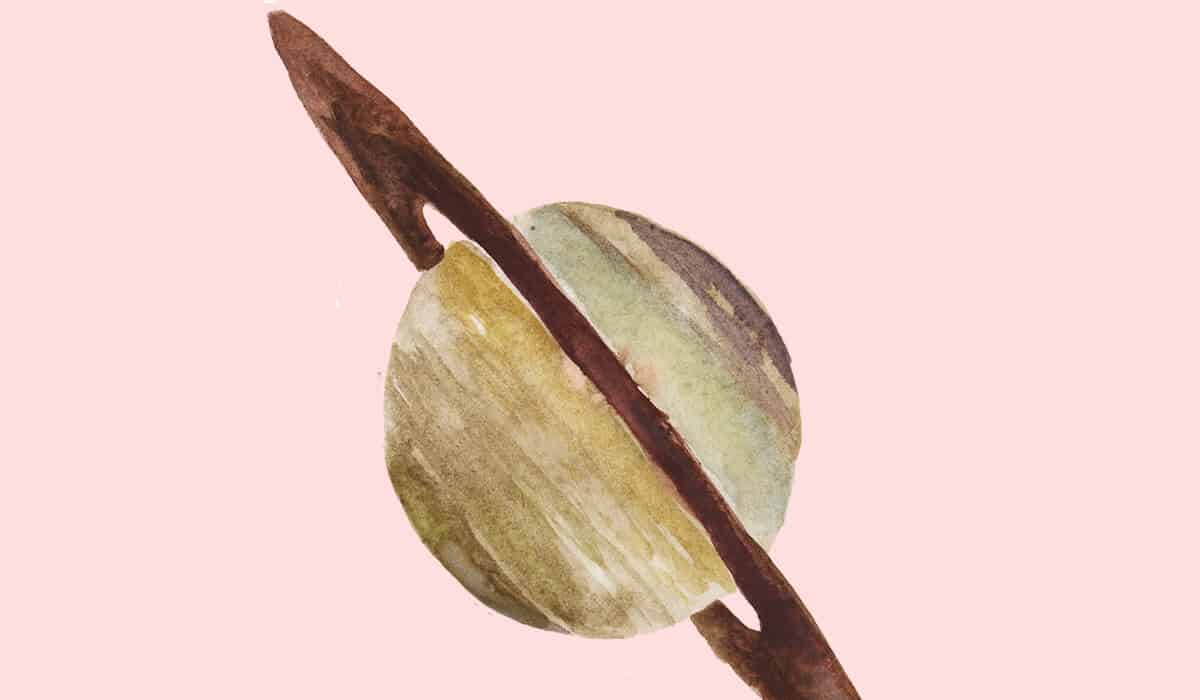 Karma police! Stoic Saturn is the whistle-blowing taskmaster of the skies. According to astrology, Saturn governs time and the wisdom and expertise that comes from slow, steady and structured growth.

Saturn is the mythological father of hedonistic Jupiter, enforcing a timeout and scolding us when we get a little too carried away. Like a master architect, Saturn is the planet who likes to work from a blueprint, understanding where the rules and restrictions lie—then calculating savvy solutions based on empirical data.

While strict Saturnian energy can feel like a buzzkill, we ultimately benefit from its maturity and planning prowess. Saturn spends two-and-a-half to three years in each zodiac sign, giving us a solid window for strengthening and developing specific areas of our lives.

With Saturn, we reap what we sow.

Every 29.5 years (approximately) comes the Saturn return, a maturing rite of passage marking Saturn’s homecoming to the sign it was in when you were born. The first return can happen between ages 27-30, depending on Saturn’s degree in your chart. The planet’s heavy-hitting energy will make itself known, bringing opportunities to quickly grow up and even take on powerful roles of authority.

Saturn also turns retrograde every year for approximately four and a half months, which can stall progress and force us back to the drawing board to ensure that we’re building everything on a solid foundation.

Taskmaster Saturn applauds perseverance and shows us where we should keep on pushing! This is the planet that rules structured Capricorn, the zodiac’s Sea Goat (a WTF creature if ever there were). With its aquatic tail and two front legs, the Capricorn Goat makes an unwavering ascent to the top of the mountain for the win.

Saturn is known as Father Time or, as astrologer Alan Oken calls him, Lord of Karma. With Saturn, we reap what we sow. Saturn governs the legacies we leave behind and our lifetime achievements. Our careers are also directed by Saturn, as this planet will show the interests we find worthy of hustling for. Although the expertise may take decades to catalog, we’ll be driven enough to keep trying, learning and focusing. Someone born with Saturn in technology-driven Aquarius, for example, may develop a groundbreaking scientific invention or become a leader in a social justice movement. While a Saturn in sensitive, homespun Cancer could be the glue that holds the family together, or even make a living developing residential real estate. To find out your Saturn sign, run a free chart here: www.astrostyle.com/free-chart.

Saturn’s influence is definitely mighty. As the second largest planet, it is also the last one that we can see with the naked eye. Saturn actually gives off more energy than it receives from the Sun, symbolic of how this planet drives us to produce, hustle and draw on our inner reserves of strength. Before telescopes were around to sight Uranus, Neptune and Pluto, Saturn was also the co-ruler of Aquarius, the zodiac sign that governs the future. So don’t get it twisted: Saturn isn’t totally stuck in the past! In order to build, one must also look forward—and remain a few steps ahead of the game.

Saturn—and people with a strong Capricorn influence in their charts—can be as inventive as they are diligent. This planet can keep us ahead of the curve while also reminding us to adhere to tradition.

Where do you long for status? Saturn can reveal our desires (or lack thereof) to keep up with the Joneses. Cool composure is Saturn’s gift. This elegant planet bears gorgeous rings made of dust and ice. (Hello, ice-encrusted knuckle duster as a reward for your hard work?)

The shadow side of Saturn is a domineering or power-hungry drive. In mythology, Saturn was said to have eaten his children because he feared one would overthrow him! Spanish painter Goya even depicted this in the famous work, “Saturn Devouring His Son”. Eek! How far will you go to win? Should the ruthless tyrant within rise up, lean in to the zodiac sign that Saturn is transiting (or its natal position in your chart) to restore your good sense.

There’s definitely no cakewalking where Saturn is concerned. Study Saturn’s placement in your chart and you’ll see where some of your earliest struggles lie. Someone born with Saturn in communicative Gemini may struggle with speech and self-expression. We, in fact, have this placement in our chart. As children of an immigrant father and grandparents, there were multiple languages and accents in our home which affected our pronunciation of words, and even brought teasing from other kids. Yet, having to keenly listen in order to understand gave us a knack for language, which translated into careers as writers—and the ability to decode the complicated lexicon of astrology. Public speaking and podcasting are part of our work as adults, too. So there you have it, an example of Saturn’s influence in triumphing over the odds. Just. Keep. Pushing!

To learn how to work with Saturn’s energy, below is a handy guide:

Domicile: Capricorn
The planet’s home base, an easy flow if placed here in the chart.

Detriment: Cancer
Opposite sign of home base, may need to work harder to integrate the planet’s energy if placed here in the chart.

Exalted: Libra
The planet’s most powerful position, indicates ease and added fortune with using the planet’s energy if placed here in the chart.

Fall: Aries
Opposite sign to the exalted position, can indicate struggles with utilizing the planet’s energy if placed here in the chart.