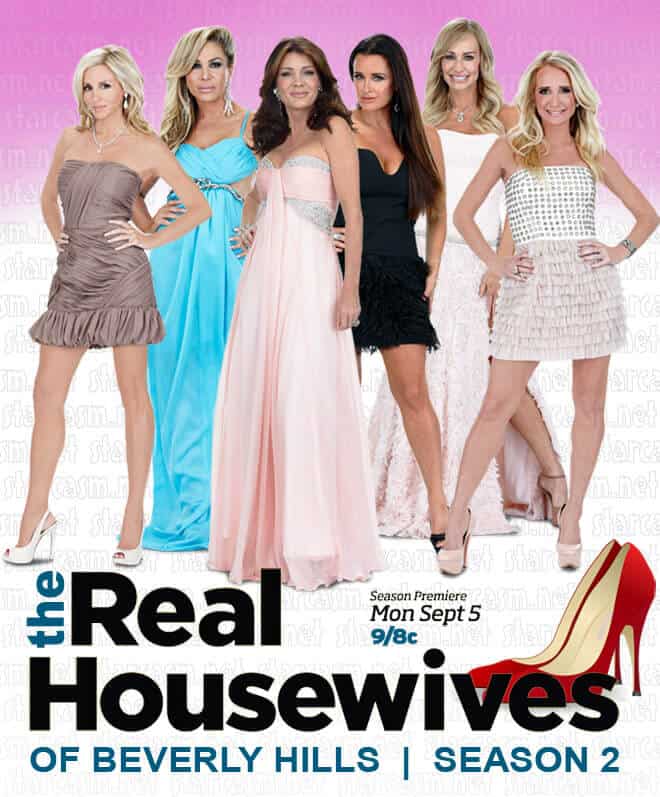 As for so many of you, the Real Housewives of Beverly Hills has become our latest guilty pleasure. As we watched the parade of plastic surgery and manicured mansions, we naturally NEEDED to know their signs. Imagine what a quick trip to Wikipedia turned up: four of the six cast members are Virgos! Kim, Lisa, Camille and Adrienne are all born under the same sign. Fascinating! Kyle is listed as a Capricorn, which is an earth sign like Virgo. Alas, Taylor’s zodiac sign data couldn’t be found (anyone know it? tell us!), but we intend to find it before the season is over!

Virgo is the sign of the perfectionist, which might explain the “buckets of Botox” and other surgical procedure these Housewives openly cop to getting. Interestingly, the state of California is also Virgo-ruled (founded September 9, 1850), as is Los Angeles (founded September 4, 1781). No wonder Beverly Hills is the cosmetic surgery capital of the U.S.A., huh?

(We’re also loving New York Magazine’s satirical recap of every episode, where they decode the subtext of all those catty conversations. Meow!)

Virgos, we love ya, but you know that you can be a tad neurotic at times, right? So we hope you’ll take it in stride as we analyze the Virgo-ness of these 4 Beverly Hills ladies…

Lisa Vanderpump: Crisp and clean is how the zodiac’s “virgin” likes it, and Lisa’s estate is decorated in lovely whites. Her restaurant is also called Villa Blanca, as a nod to what appears to be her favorite non-color. Virgo rules the kitchen and hearth, and Lisa joins the ranks of other Virgo foodies, like Mario Batali and Rachael Ray. She has the sharp-but-snarky Virgo humor, and we eagerly await her little side comments.
Oh, and about that Virgin reputation…she DID joke during the premiere that husband Ken calls her a sex object because “every time he wants sex, I object.” Her words, not ours!

Kim Richards: Virgos are early intellectual developers, and Kim has made it known that she was a “child actress” whose career began early. Like many Virgos, she is introverted and takes a while to warm up to people. Kim made a point of saying that she didn’t trust the other Housewives right away, and struggles with feelings of loneliness and isolation that can plague the shyer Virgo. Putting all her focus on her children is a very Virgo trait, too, as women of this sign love babies, and relate to the innocent spirit of young children. Virgos DO have a rep for lapsing into gossip, and while they can act like they’re “above” conflict (rewind to the Kyle-Camille showdown in New York City), they can be passive-aggressive, or snipe behind each other’s backs. Not that this is really sign-specific among any of the Real Housewives…

Adrienne Maloof: A no-nonsense businesswoman, Adrienne is sensible and smart, two traits Virgo women pride themselves on. In fact, the women of this sign often get along better with men (Camille!), and Adrienne carries herself powerfully when interacting with athletes twice her height—or flipping her sons on the floor, martial arts style. Virgos can be extremely critical of those closest to them (and of themselves), but it’s kind of how they show love. Her plastic surgeon husband Paul, the usual target, must know this. Hey, at least the Botox is free!

Camille Grammer: Last, but certainly not least, the Housewife everyone loves to hate seems to have developed her sign’s most negative traits: Cattiness, competing with other women, name-dropping and taking people’s words in an overly literal way (never say “insecure!”). Virgo is the sign of the helper, and Camille claims to have been the codependent savior of her ex-husband Kelsey Grammer. (A Pisces, Kelsey has openly admitted to struggling with drug and alcohol addiction.) Virgo rules the digestive system, and a lesser-known fact is that Camille has Irritable Bowel Syndrome. She’s even a spokesperson for the disease, and claims this is why she had a surrogate carry her children. Although she drives us insane each episode, we kind of feel for Camille. We know that deep down every Virgo is her own harshest critic, and that underneath all the talk and crazy narcissist acting out, she’s probably driving herself reaaaally insane.

Who knew that Virgos could be so damn entertaining? Well, they’ve got Beyonce and Michael Jackson among their ranks, after all. We’re breathlessly awaiting this week‘s episode, once again. Thanks, Virgos, for giving us one of the best Housewives seasons yet!