What Black Holes Mean in Astrology 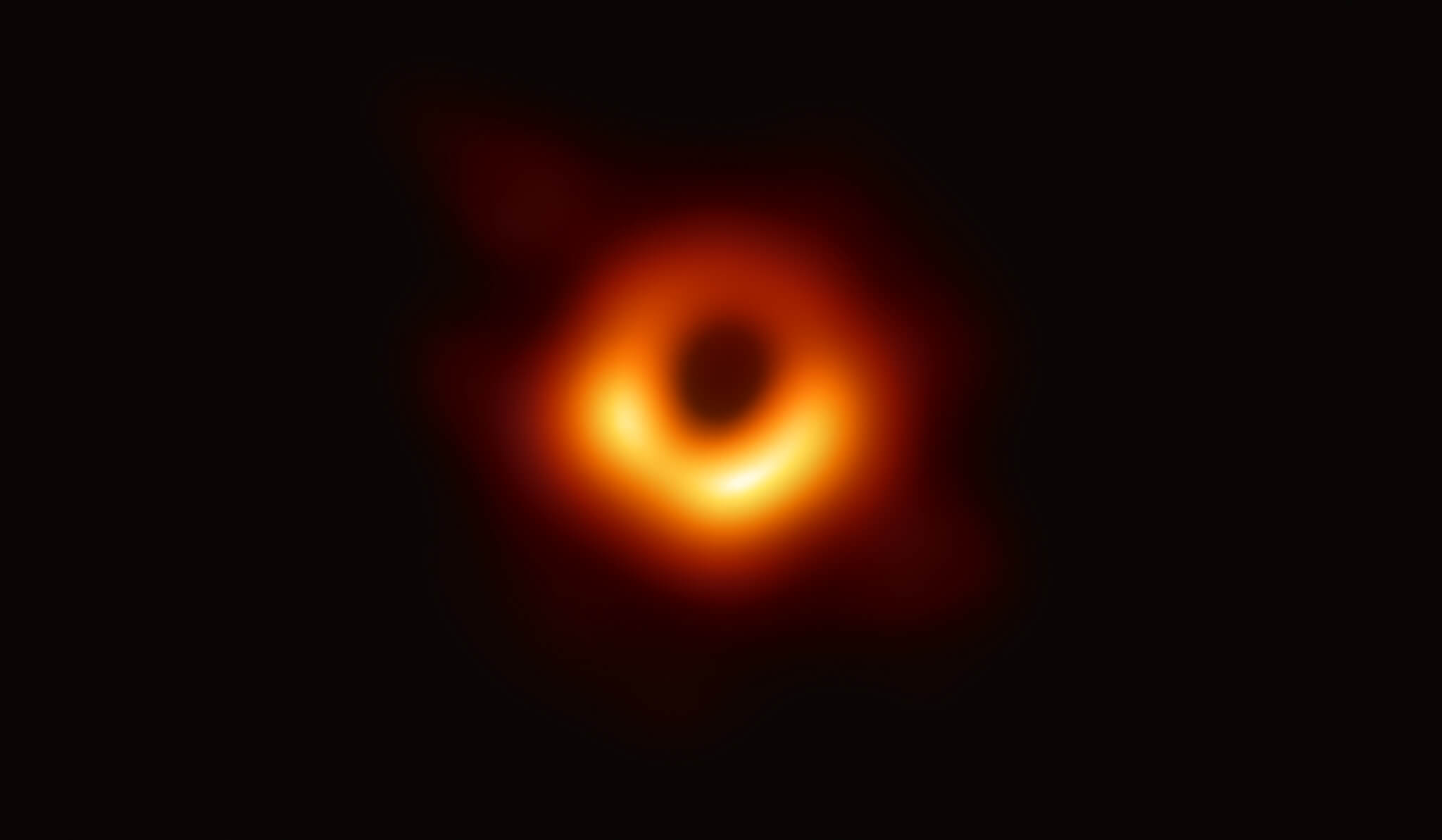 History was made on April 10, 2019 when teams of scientists all around the world captured visual evidence of a collapsed star—and one that is 55 million light years away and 6.5 times bigger than our own Sun!

By now, you’ve probably seen the photo of Virgo A, the supermassive black hole ringed by an orange glow at the center of the Messier 87 (M87) galaxy. When news first broke of Virgo A’s capture by telescope cameras, a 29-year-old female scientist, Katie Bouman—a Taurus (May 9, 1989)—was credited with heading a team that created an algorithm that made the image possible. In truth, no one person is solely responsible for this Herculean effort. But we have little doubt that mad scientist Uranus, who entered her Katie Bouman’s sign on March 6, has its fingerprints on this. If nothing else, the widely circulated photos of Dr. Bouman covering her mouth with surprise and awe at first glimpsing the photos is a shout out to the amazing women in the S.T.E.M. fields—and hopefully a clarion call for more women to move into these historically male-dominated industries! 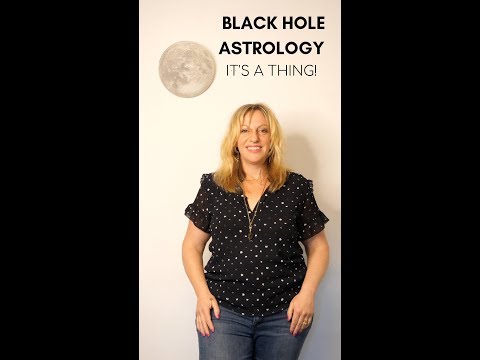 What makes the April 10 discovery a landmark is that we can actually see the black hole. That said, we’ve been talking about black holes since 1916 (and even earlier), when Pisces Albert Einstein introduced the General Theory of Relativity. Up until this point, however, we had to rely on complex equations to confirm their existence rather than any visual cues. But now…voila!

Once an interstellar object is on our radar, both astronomers and astrologers put on the proverbial lab coats and get to work. Spiritual stargazers have actually been interpreting Virgo A—along with more than 50 other black holes—for a while. In fact, some hardcore astrogeeks out there, including deep space astrologer Phillip Sedgewick and Alex Miller, have authored interpretive systems for understanding how black holes impact our charts.

In The Black Hole Book, Alex Miller lists the zodiac position 57 of these cosmic phenomena, each of which has a location on the 360º horoscopic wheel. One of the more well-known black holes is the one in our own Galactic Center, the middle of our Milky Way galaxy. This one is called Sagittarius A and is currently stationed between 27º and 28º Sagittarius on the Western zodiac wheel. The now-visible Virgo A, which lives inside the Virgo constellation, is currently moving near 1º Libra.

Note: It’s important to note that modern day (Hellenic) astrology is not based on the position of the constellations. Although these clusters were once place-markers for each of the 30º slices of the zodiac wheel, they have shifted over time. More on that in the article we wrote debunking NASA’s 2016 claim that your zodiac sign has changed.

Unlike planets, black holes do not move along an orbital path. They are collapsed stars with an intense gravitational force that sucks in matter so densely that no light can escape. Black holes do drift and shift in space over time, but they are considered “galactic points,” because they have a more fixed placement in the sky. Sagittarius A, for example, takes 72 years to move a single degree.

So, what does this mean for us down here on Earth? There are two ways to look at black holes in astrology: first, how they impact all of us universally, and secondly how they mesh with your individual sign and birth chart.

On the broadest note, black holes are unseen forces that pull us into their fields. They yank us into the shadows and make us stare down our addictions, compulsions and vices. They represent the patterns we find difficult to break…and the innate frequencies (like radiowaves) that we are tuned into as humans, often unconsciously. They also reveal our hidden powers, the things that make us so magnetic that people want more. These are the gifts that we can’t deny, even if we’d rather not pick up the sword for that hero’s journey.

If a black hole is positioned near a planet in your birth chart, it may have a lot of pull on that part of your personality. (See table below.) Turns out Black Hole Sun is not just the name of a 90s Chris Cornell song. People who were born with their Sun within three degrees of a black hole on the zodiac wheel are called “Black Hole Sun personalities,” among astrologers.

To see if Virgo A may be impacting you personally, run a natal chart for yourself here. Then, check to see. Do you have any planets close (within 3º) to its current placement of 1º Libra—that would be 28º-29º Virgo or 0º – 4º Libra? 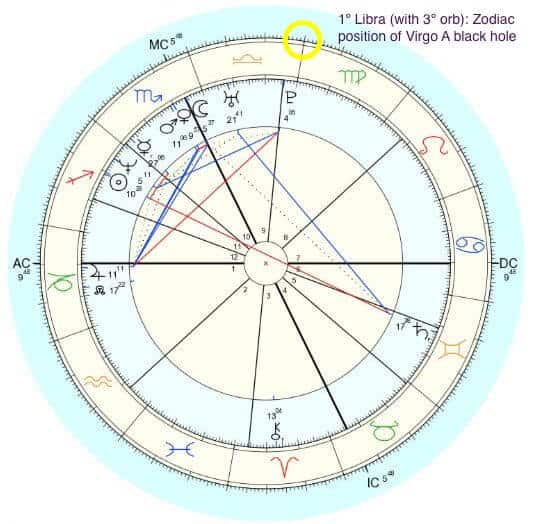 If you know your time of birth and are able to calculate houses, you can see what house Virgo A falls into. In the sample chart above, it lands at the end of the 8th house, where 1º Libra is located. The house placement of the black hole may reveal an area of life where you could use some transformation. Tali talks about this in the video above. (Not sure what that means? Watch our video on how to interpret your chart!)

If Virgo A (or any black hole) happens to be placed within three degrees of these planets, you may feel an extra charge as you work through your subconscious blocks. Below is a table of what you might transform if any of these planets sit near 1º Libra in your chart. (Or, for you advanced astrogeeks out there, is aspected to it in a trine, square, etc.)

If this planet is conjunct (or aspected to) a black hole, this may be a struggle and a mission in life:
Sun: Figuring out your sense of self or purpose in the world without outside validation

Moon:  Gaining control over your own emotions and desires

Mercury: Communicating effectively so as not to leave people feeling manipulated or pressured

Jupiter: Gambling addictions, struggles with staying in one place (but starting fires and not putting them out)

Saturn: Feeling overly burdened by responsibility; an addiction to power and control

Uranus: Experimenting with danger, figuring out how to live on the edge without being destructive

Pluto: Seeing life as a constant power struggle, attracting people with major secrets and skeletons in their closets

Don’t freak out if you discover that a black hole is influencing your chart! Sure, it might bring some bonus challenges, but along with those come the ability to gain extraordinary superpowers! For more on how Virgo A could be impacting your Sun sign, check out our article on ELLE.com.