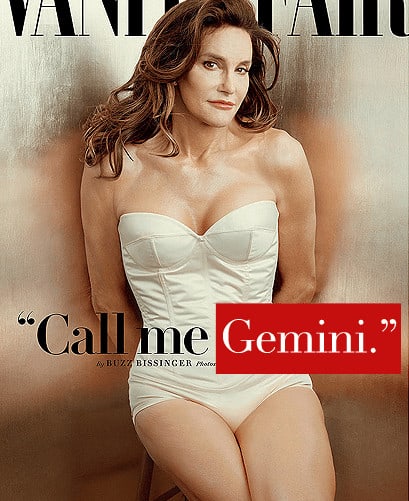 Anyone who’s picked up a Wheaties box—or a remote control—in the last 40 years knows the name Bruce Jenner. But the man behind the legend? Bruce, we hardly knew ye. No surprise: As a mysterious Scorpio, Bruce was able to keep THAT secret locked in his emotional vault, even while living with round-the-clock camera crews.

But now that Bruce has become Caitlyn, and we’ve all glimpsed the “Her” who dined off-reel with Diane Sawyer, we have to ask: Shouldn’t Caitlyn Jenner get a new astrological chart? (Um, yes!)

We’ve based the “birth” of Caitlyn Jenner on the public debut of her Vanity Fair cover (via Twitter) on June 1, 2015 at 9:17am PST—that moment when “Call Me Caitlyn” broke the Internet harder than KiKi’s tanned-and-oiled derriere. (Keeping up with the Kardashians? Ha! He dusted ’em like decathlon runners during his heroic Olympic dash in ’76.)

Now, take a look as we analyze Caitlyn’s chart—and Bruce’s “before” chart—to map this historic transformation:

Caitlyn was “born” with the Sun in shape-shifting Gemini and the moon in transformational, sexy Scorpio. Gemini rules communication, and oh, did Caitlyn deliver a message. The stars aligned perfectly for it, as the Sun, expressive Mercury AND driven Mars were all clustered in Gemini. Nope, the world would not be ignoring this headline.

We think of Gemini as the sign of the “gender bender”—where you can be him, her, either, neither or both. This is the sign of the Twins, the multi-faceted (and faced) people of many selves. How fitting, as Caitlyn will embody the cellular memory of Bruce—and many of his interests, mannerisms and (for now?) conservative politics.

Gemini is also the ruler of language. Caitlyn could pioneer a pronoun revolution…or unwittingly shepherd the trans community’s “ze” and “hir” into mainstream lexicon. Surely, Caitlyn owes thanks to (Gemini) Laverne Cox and (Scorpio) Ru Paul, who are paving the way for public recognition of trans people. (We love this thought-provoking piece by Cox.) The difference here is that we knew Bruce Jenner so vividly and intimately as a man. Caitlyn may be our first mainstream trans superhero…touching down in Louboutins and a tasteful Prada cape.

Sun-Neptune Square: Masculinity as we know it evaporates.

As Caitlyn emerged, the Sun, ruler of identity, was also forming its once-a-year square (90-degree angle) to Neptune, the planet of secrets, illusions and hidden information. Those pictures said a thousand words…yet, we are left to fill in the details with our imaginations (enchanting Neptune never tells all). The “big reveal” was also a teaser—and we can expect that Caitlyn may continue to tell us everything and nothing all at once. (Who picked the outfits? Did she have reassignment surgery? Will there be a reality TV series?)

The Sun also rules the masculine principle and life force energy, while receptive Neptune casts a mirage. As Caitlyn sprung into being, the classical notion of the ideal man—a modern-day Greek Olympian carrying the torch for all that is “He”—dissolved in plumes of filtered sunlight and boned white satin. While the Kardashians’ waist-trimming corsets attempt to melt away fat and exaggerate curves, Caitlyn’s tasteful counterpart announced a subtler, simpler femininity…and turned all that the world knew as “masculine” on its head.

While the Vanity Fair beauty and styling teams won’t be on call 24/7, we expect that Caitlyn will keep cutting a fashionable profile. With a feminine Cancer rising, she will revel in all things girlie, soft and sartorial. Beautifying Venus is also in Cancer, in her enchanting and mysterious twelfth house. Caitlyn’s private life will likely remain just that—private. But the glam squad WILL be on speed dial. Larger-than-life Jupiter is in showy Leo, nestled in her head-turning first house of appearances. On-demand fierceness: yes, please.

Now, let’s look at the chart that Bruce Jenner lived. Born October 28, he was a Scorpio with a Scorpio rising—twice the secrets—and a detached Aquarius moon. The double-Scorpio vibration allowed him to live behind a mask, channeling his pent-up frustration into intense and focused goals (e.g., winning the Olympics) and whatever introverted pursuits he enjoyed after that.

The sensitive, emotional moon in people-pleasing Aquarius allowed him to detach from his feelings and live a double life of sorts. With love-planet Venus in virile Aries, Bruce was able to play the role of the studly man-hero in his relationships…and indeed he has the clan to prove it.

How interesting that Caitlyn’s Venus is now in Cancer, the most ladylike sign of the zodiac. Talk about a 180 switchup! As her sexuality takes shape, Caitlyn will want to be appreciated for her femininity and softness by any future partners.

Another 180? Bruce Jenner was a driven, masculine and athletic Aries south node/Libra north node. Interestingly, he became Caitlyn when the nodes (destiny points) were in the opposite position. Now, his south node is right at home in feminine, girlie Libra—which happens to be stepdaughter Kim Kardashian’s Sun sign. No wonder KK took charge of finding Caitlyn’s glam squad!

Chinese astrology also plays a part. Bruce was born in 1949, the year of the plodding, dutiful Ox (cue his misanthropic character on KUWTK), which reinforced Bruce’s choice to just grit his teeth and bear his unhappy lot for so many years. Caitlyn arrived in the glamorous and feminine Year of the Sheep, shot through the cannon of a soft-focused Leibowitz lens. Viva la difference! 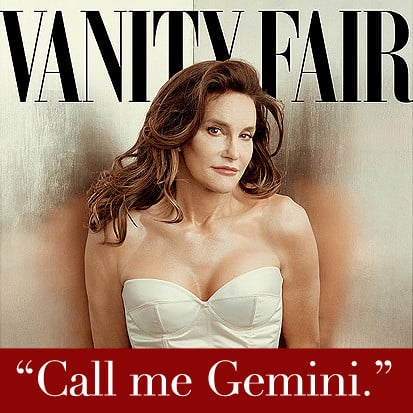 What’s next for Caitlyn?

As a Gemini, Caitlyn is enjoying Jupiter in her solar third house of communication and media until August 11. It’s the perfect year to sign a book deal—if she hasn’t already (we’re certain the publishing house auctions will be a bidding battlefield). Will E! announce a spinoff series—Catching Up With Caitlyn, perhaps? [Update: Just as we posted this, word broke about Jenner’s “I Am Cait” series, debuting on July 26.]

On August 11, lucky Jupiter will move into Geminis’ solar fourth house of femininity, home and family. This will set off a 13-month cycle of Caitlyn truly coming into her own as a woman, and a positive period of evolution for her whole family—with some necessary growing pains, too. Seems perfectly timed with what’s ahead, doesn’t it?