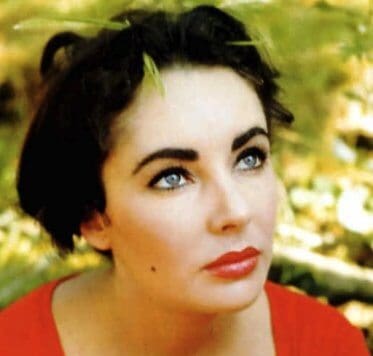 Legendary actress and activist Elizabeth Taylor died today at the age of 79. In honor of her life and her contributions to charity and popular culture, we’re taking a look at her astrological chart. 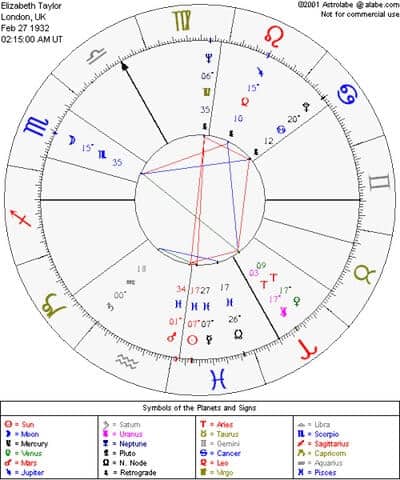 Elizabeth Taylor’s Astrological Chart
Taylor was a Pisces with a Scorpio Moon and a Sagittarius rising, the perfect setup for this violet-eyed star who cornered the market on glamour. Here’s how she bore the stamp of her planetary lineup:

* Pisces is the sign of deep compassion. Liz was an outspoken advocate for charity, particularly AIDS. Her luminous eyes revealed the deep Piscean wells of emotion. In fact, she was born with a double row of lashes, which made her eyes appear even more prominent.

* Pisces rules film, theater and glamour — the perfect sign for one of the world’s greatest stars of the silver screen.

* Pisces are often “serial monogamists.” Like the fish symbolizing their sign, they can flow from one relationship into the next.

* Her Scorpio Moon made Liz a memorable lover and a natural seductress. Not only did this make her a perfect Cleopatra on-screen, but it caused men to fall in love with her throughout her entire life (hello, original “cougar”!). The Moon sign also indicates whom a person is attracted to; Liz Taylor’s greatest relationship was with Richard Burton, a Scorpio whom she married twice.

* Both Pisces and Scorpio are associated with death, regeneration, the afterlife and reincarnation. Not only did Liz seem to have nine lives, recovering from repeated injuries and illnesses, but she spoke about having had many near-death experiences.

* Sagittarius is symbolized by the centaur, a mythical creature that is half-human half-horse, and is also the sign of the equestrian. Although Liz began acting at age nine, her breakout role came at age 12, in “National Velvet,” a film about a girl and her horse.

* Sagittarius is the sign of international travel, and Liz had dual citizenship in the U.S. and the U.K.

* Sagittarius is the sign of luck, abundance and even excess. Liz embodied her Sagittarius rising (and also her Venus in Aries, making her an ardent lover) by marrying eight times. She won a record-setting $1 million contract the title role in “Cleopatra,” a movie that earned her close to $50 million over her lifetime. Taylor was also known for her tremendous diamond collection, which included a 69-carat pear-shaped diamond, the sale of which funded an entire hospital.

Astrological Timing of Death
Uranus, planet of instability and sudden changes, entered Pisces (Liz’s sign) in 2003. Since then, she had been plagued by health problems and accidents. She broke her back five times, was diagnosed with congestive heart failure, had both hips replaced, had a brain tumor operation, was treated for skin cancer, and survived two life-threatening bouts with pneumonia. Uranus has been traveling over Liz’s Pisces north node, the destiny point in the chart, since 2010. In astrology, this can indicate either an expansion into new realms of personal expression or an inner sense that one’s purpose on earth has been fulfilled.

On March 11, the same day that Uranus left Pisces after seven years, Jupiter crossed the cusp of Liz’s fourth house. When Jupiter crosses into this personal sphere, it’s typically a time that people move to a new home. Symbolically, Liz crossed over into a new “home” when she passed away.