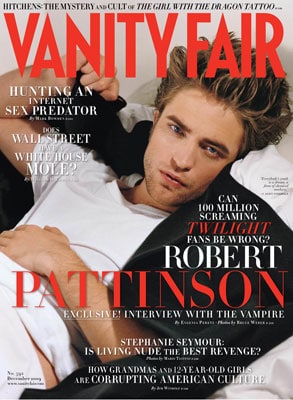 Tip to all journalists interviewing Robert Pattinson, he of vampiric hotness and Taurus sun: ask him about his intellect and talent for once.

He’s a musician who writes his own songs. He loves to read. Oh yeah, and he’s ridiculously sexy–but we heard about that in Quizfest and Seventeen already. If we see one more lame interview about how “R-Patz” has no social life, can’t get a girlfriend, and hates public attention, we may go rip a human into dinner-sized morsels ourselves. (But do keep the glossy photo spreads coming, please.)

A year ago, we spent an hour in a SIRIUS radio studio with an almost-famous Robert Pattinson. It was two weeks before the Twilight premiere, and nobody knew whom he was. A pale, nervous kid with greasy hair, overgrown eyebrows and a grungy white T-shirt straggled in with his manager. With his leftover teen gawkiness, nobody would have pegged him for a sex symbol. On air, Pattinson thoughtfully shared his desire to please the book’s fans, and how hard he’d worked to be a good Edward Cullen. Teenage vampire tale or not, acting was his craft, and he took pride in it. That’s a Taurus: this sign is serious about work; the subject matter is irrelevant.

Like many of his fellow Bulls, Pattinson seemed to be a simple guy in his habits and lifestyle.  Tauruses are red-blooded fellas, easily sated by a heavy meal, a dark brew or a lovely companion. Tauruses are also some of the zodiac’s most soulful people. Their ability to be in the moment is unparalleled. And while they’re mistaken for boring, they’re actually just savoring the here and now.

Yes, Pattinson did fill the air with random anxious chatter: before talking movie, he babbled about the double order of Egg McMuffins he’d eaten for breakfast (“two-fisted”) and how much he loved McDonald’s. But his self-effacing humor was his plea to be viewed as a serious artist, Hollywood blockbuster be damned. Taurus is a sophisticated Earth sign, not a superficialist. These people want to be judged on their accomplishments, their hard work and talent. They want to EARN the love.

When we met Pattinson, he was sweet and gracious. We gave him a short on-air astrological reading. Afterward, he shyly asked, “So, you think I’m gonna do okay? People will like the movie?”

“Absolutely,” we assured him, and he exhaled. “Jupiter, the planet of luck, is going into your career and fame sector in January. 2009 could be the biggest year of your life.”

Like he needed to ask. A week later, he was a legend.

Now, we kind of feel sorry for the guy. Tauruses love to be out among the people, and though they can be snobbish or selective in their cultural tastes (food, music, wine), they’re proletarians at heart. If indeed he cowers in his hotel rooms to avoid the crazed mobs, he must be one depressed Bull. For Tauruses, affection, friendly flirtation and charming exchanges are the bread of life. No doubt his only escape is to pour himself into his work, but Tauruses need equal amounts of pleasure to remain balanced. Often, this means unwinding at their favorite public spots: cafes, lounges, hotel bars. For Pattinson, the pleasure cruise may be docked in the port for a while.

Will Pattinson’s diminished role in New Moon turn the spotlight away? Not likely, with Jupiter and glamorous Neptune still in Aquarius, his fame sector, until January. Aquarius Taylor Lautner may convert more Team Jacob members, but he doesn’t have the power of Pattinson’s timeless Taurus charm. Fans will still root for romance between Pattinson and Aries co-star Kristen Stewart (they’re the same signs as David and Victoria Beckham) — both in character and off-camera.

Like vampire Edward Cullen, Pattinson’s fame may have damned him to an eternal hell on earth — sans the everyday pleasures that feed a Taurus soul. Was it worth taking that bite of fame? Only the future will tell. Maybe we should go ask Alice.