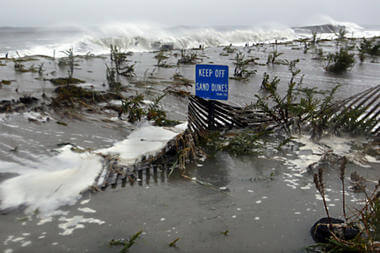 Less than a month after challenging Saturn moved into Scorpio (on October 5), the United States was hit hard by the east coast Superstorm Sandy.  While we don’t want to diminish the impact with a “so, what can we learn from this” platitude, we can’t help but reflect on some astrological trends and timing. After all, a full moon that night caused higher than normal tides. To deny a connection between the cosmos and the weather would be odd (and unscientific). Astrology at its best can provide comfort and insight, and that’s the intention of our reflection here.

On the eve of Hurricane Sandy, there was a full moon in Taurus–an earth sign–and the Sun and restrictive Saturn were in Scorpio–a water sign. Scorpio is ruled by Pluto, mythic god of the underworld and the planet associated with apocalyptic-style transformation. An intense contrast between land and sea was in effect. During a full moon, the Sun and the moon are in opposite zodiac signs, which can create a polarizing intensity. Saturn is also the cosmos’ tough teacher, and it’s now in a water sign (Scorpio) that rules destruction, renewal and the phoenix rising from the ashes.

Our respect for nature (and you) is too great to give some kind of finger-wagging post-Sandy lecture. That only make people feel shamed, which serves no good. Looking at the stars, though, there are definitely opportunities to shift the way we approach financial matters, the environment (especially the oceans), resources and sharing. Taurus and Scorpio are the “money” signs in astrology. Taurus rules the zodiac’s second house of daily work, earned income and material possessions. It’s like the kid sitting on a pile of toys saying, “Mine!”

Scorpio rules the money and resources we share with other people. If anything, its keyword would be “ours.” Scorpio is the shrewd investor and joint venture sign. With tough-teacher Saturn in Scorpio for the next three years, the world is definitely due to restructure the way we share our piece of the pie. Where and how we spend our money, time and energy is becoming more important than ever. Neighbors banding together to offer power, heat, shelter and relief? Hopefully that won’t stop now that the lights are back on. How people handle the aftermath of Hurricane Sandy could be an important catalyst toward a more widespread communal lifestyle: shared meals, carpools, bike-to-work efforts, co-op childcare and housing. Our father grew up on an Israeli kibbutz, so borrowing a bit from this cooperative model might make sense now. If it cuts costs and builds community, Saturn will approve.

Saturn also rules architectural structures, and with watery Scorpio ruling destructive forces like storms, it’s probably time to build seawalls, disaster-proof buildings and other monuments that prevent widespread weather damage. (According to this 1999 New York Times article “Hurricanes On The Hudson,”  measures have been recommended and ignored for years.) The stars themselves have been saying “water, water everywhere.” In October 2012, Saturn formed a powerful trine angle to Neptune, god of the seas (in its home sign of Pisces, doubling its impact). This brought us an unusual abundance of water energy, underscoring the need to respect the natural resources of oceans, lakes and rivers. In September, the moon’s nodes, which rule eclipses and karmic lessons, shifted onto the Taurus/Scorpio axis, too. The need to harmonize land and sea especially pressing for the next three years.

Since June 2012, we’re also in the midst of a long on-and-off square (angle of challenge) between Pluto (ruler of Scorpio and reinvention after destruction) and Uranus (ruler of sudden events, radical awakenings and electricity). This is a light-versus-darkness matter, both symbolically and literally. Shadowy Pluto submerges us in darkness (and points to our own unconsciousness) while Uranus is the explosive lightning bolt (and the inner jolt that spurs us into action). It seems we’re being shocked out of our own “darkness” by this planetary transit. Hopefully, this will awaken some Uranian activism, scientific innovation and social reform.

As longtime New York City residents (though we were luckily not in town during the storm), seeing one of the world’s power centers plunged into darkness could serve as a metaphor for our own transformation. Some questions to ponder (if you feel like it):

* How are we not protecting our own “power” properly?
* Which resources could we share with our neighbors, friends, family, community?
* Where could we shift from “mine” to “ours” and feel relief, connection or the pleasure of togetherness?
* How can we better invest in businesses, resources, etc. that replenish themselves (and us) and create long-term sustainability?
* How are we relying on external forces to give us our “light”, rather than creating light from within?

We welcome your comments and feedback. And if you’re one of the many personally affected by the hurricane, we wish you speedy recovery and relief.