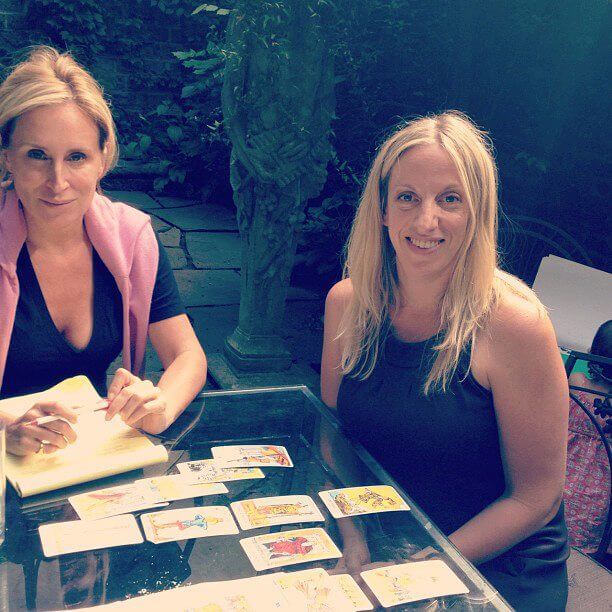 Ophira offered a reading to Sonja. She accepted. Five hours later, they were still talking stars.

Anyone who reads our horoscopes regularly knows that Tali and I can’t get enough of the Real Housewives franchise. Jersey, Atlanta, Beverly Hills…drop a Bravo crew in Duluth, Minnesota and we’d still watch the fascinating dynamics unfold. So I was thrilled during RHONY’s second season when newcomer Sonja Tremont-Morgan shamelessly asked Countess Luann her astrological sign (Taurus) and shared  that she was a Sagittarius (like me, awesome!). A couple weeks ago, I was flipping through Watch What Happens Live; the guests were Sonja and Sandra Bernhardt. Sandy and Andy were celebrating their birthdays. Sonja murmured, “Ooooh, Geminis.” They missed it. I didn’t.

So I wrote to Sonja. I offered a reading. Apparently, I was the only person on the planet (or at least, in the pop culture universe) who didn’t know that Sonja had been going through a multimillion-dollar lawsuit and a possible bankruptcy, due to a movie deal gone awry. All the more reason to consult with the stars—and I was eager to offer any guidance, insight and support that I could.

I arrived at her Upper East Side townhouse at 4:00 on Father’s Day. Sonja greeted me warmly in workout clothes, ushered me into her living room (where I glimpsed the garden, site of the infamous “thug in a cocktail dress” Alex ousting.) She was gracious and down-to-earth from the get-go, and even dashed upstairs to shower, descending makeup-free in a pretty white Bohemian dressing gown that channeled 1970s Lauren Hutton. Her poodles, Millou and Marley, scampered around, and Sonja apologized for their barking and wee-wee pads. “Kelly says my  house is dirty, but I have a new puppy who’s potty training,” she said. That’s the Sagittarius way—even in posh quarters, our sign keeps it real. (P.S. her place is clean, but it also felt comfortable and homey, not sterile.)

Without betraying confidential client details, here’s the scoop: Sonja is aSagittarius with a Pisces moon and a Gemini rising. The Pisces moon draws her to the arts, charities and the occasional bottle of “Ramona” Pinot Grigio. The Gemini rising makes her witty, entertaining and in ever-changing alliances on RHONY. It’s also probably what earned her the nickname “the straw that stirs the drink” on the social scene. Sagittarius, Gemini and Pisces are all mutable signs—gifting Sonja with lots of friends from all walks, great conversational skills and the ability to go with the flow. The flexible nature of mutable signs will surely help her deal with her challenging $7-million judgement.

But the real focus of our reading was on Sonja’s north and south node, which are the destiny points in the chart. The south node indicates who you were in a past life and what you’ve come into this lifetime being naturally good at. It’s sort of like your karmic comfort zone. The north node is your learning curve, your karmic destiny in this lifetime. Because it’s a new soul expression, it feels like unfamiliar terrain. It’s the area of human potential that requires us to stretch beyond our limits and learn something new, in order to expand our souls and express our highest selves.

Sonja’s south node is in Capricorn, sign of old money, aristocracy, history, military and men. Masculinity and status are her comfort zone. You know how she says “I have a taste for luxury…and luxury has a taste for me” in the RHONY opening credits? Well, yeah. In her past lives, she’s either been married/born into wealth OR a wealthy aristocrat herself. Sonja’s ex-husband John Adams Morgan is a descendent of J.P. Morgan, and they met while she was working as a restaurant consultant, overseeing everything from the clientele and opening parties to the wine and decor. They later exchanged numbers in St. Barth’s. Astrologically, this makes total sense—Capricorn south node people exude status, and because Sonja’s is in the 8th house of “other people’s money,” she’s a magnet for refined people and experiences. “I had royalty from France sitting here last week,” she told me—not bragging, just being matter-of-fact.

After I explained the nodes, Sonja chuckled with recognition as we glanced around her sitting room. Framed sepia-tinted pictures of aristocratic Morgan ancestors surrounded us—looking Capricorn-stern in that turn-of-the-century, unsmiling way. On the walls: photos of a scowling Native American chief, and a few paintings depicting hunting scenes. Sooooo Capricorn. “I don’t even know why I have these up,” Sonja laughed. Like all of us, karma sometimes wrangles its way into the interior decorating scheme.

On the flip side, Sonja’s north node is in Cancer, the sign of femininity, domestic arts, motherhood and women. Womanhood is like a new language to Sonja in this lifetime. Being in the televised sorority of Real Housewives-ville is a perfect karmic nudge toward her Cancerian destiny point. Few people know that Sonja loves to do her own gardening, especially flower arranging with affordable options like tulips (she’s starting to show that on her blog). But the toaster oven and “luxury-on-a-budget” brand she’s working on? Shazam. Even better, she’s developing the book with her Libra daughter (who has the same north and south node as she does, interestingly). Because Sonja’s north node is in the 2nd house, which rules earned income and roll-up-your-sleeves hard work, it’s the perfect launch into Sonja’s karmic path toward self-sufficiency.  According to the destiny points in Sonja’s chart, she’s supposed to move away from inheritances, settlements, married-into money and blaze her own trail.

Fortunately, Sonja has a Sagittarius sense of humor and got the karmic joke. She’s really into astrology and was so open to my reading, taking copious notes in a journal. In our typical Sag style of springing into action, we prowled barefoot through all five floors of her townhouse, gathering up pictures that were either too masculine, militaristic, or mired in the past. Sonja made piles for storage and jotted notes for her staff (heads-up to the houseboy: you’re getting a king-sized bed from the basement). Two hours into the reading, my husband dropped off my 8-month-old daughter Cybele, who joined us as we made plans to swap velvet first-floor chairs with some pretty fleur-de-lis seating from her bedroom, to balance the polarized masculine and feminine floors in her house.

And can I just say? Sonja’s bedroom is awesome. Gorgeous canopy bed, and bookshelves stuffed with astrology and other life-improvement reads. Sonja even pulled down a thick 900-year-old Egyptian divination manual and looked up my birthday. Apparently, I’m a 3 of diamonds, which means I’m a natural writer, but I have to be careful not to give too much. (Mmmm-hmmmm.) Oh, and to everyone who thinks her elevator is stuffed with cleaning supplies—that’s only when the staff is cleaning the house. Although I did have to giggle at a fourth-floor closet that was filled with what I thought were men’s boots. Apparently, in true Capricorn south node fashion, Sonja used to hunt.

Sonja’s legal woes are the work of harsh, transformational Pluto, which is passing over her south node. Pluto rules the underworld, and it only passes through a sign every 85 years or so. Pluto destroys or shakes things up in order to force a transformation or to teach us about the dark side of power. It can bring shady people, insidious agendas and dominating or destructive power plays. She was comforted a bit to hear this—as are any of my clients when I let them know a transit is causing upheaval. At least you know what you’re dealing with, and can make choices accordingly. She also has Saturn in Aquarius on her midheaven (the career line), which indicates a great career in television or as a “lifestyle expert” who gives a modern twist to all things old and time-honored. Gourmet food in a toaster oven, anyone?

Being around Sonja was great. She’s much more low-key than she is on TV, and was a pleasure to read for since she was so utterly coachable. Hanging with her fellow Housewives Ramona (a Scorpio), Kelly and Luann (Tauruses) and Cindy and Alex (Libras) would certainly be bettered with a few extra tools in the toolbelt. Here’s wishing her luck and a speedy financial turnaround. Please send her good energy!

Addendum: Sonja loves her men…and our book about men’s astrology signs. She’s a devoted fan of our book, Love Zodiac, and even mentioned it as a “guilty summer pleasure” in her Hamptons magazine interview. Thanks, Sonja!