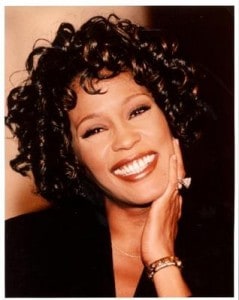 Like the rest of the world, we were shocked when the news hit that 48-year-old Whitney Houston had tragically passed. Oddly, we were in Beverly Hills visiting a friend at the Hilton, the site of Whitney’s death, that very day. The hotel was packed, but not with paparazzi — there were music industry insiders glammed up for Clive Davis’ pre-Grammy gala, at which Whitney was supposed to perform. The contrast (a red carpet, flashing lights, a luxury car on display) was bizarre and unsettling.

Why now? Neptune, the planet that rules substances, healing and psychic wounds, just began a 14-year cycle into Pisces, Whitney’s eighth house of death and addictions. While this could have been an important time for Whitney to address her long-standing battle with drugs, unfortunately, she succumbed to their effects. The eighth house rules privacy, and the pressure to perform as part of the Grammys extravaganza may have been too much for Whitney, leading her to self-medicate her anxieties. Neptune and Pisces govern water, making it extra chilling that her life ended in a bathtub.

A couple of days before Whitney’s death, tough Saturn went retrograde (backward) in Libra, her third house of the voice and communication. Saturn retrograde can bring up old insecurities, and it’s possible that Whitney was stricken with stage fright or anxiety about her upcoming public performance.

We took a look at Whitney’s chart for deeper understanding. She was a Leo with Pisces rising and an Aries Moon. Pisces rising people are among the most sensitive, artistic and emotionally fragile people on earth.They can have God-gifted talents beyond the average human’s, but they are incredibly shy. Because of this, Pisces-rising people can be prone to drinking,drugs and escapism. Michael Jackson, who died in a similarly tragic way, also had Pisces rising.

The Aries Moon gave Whitney some diva firepower, but could also have made her stubborn, selfish and unreasonable. It’s likely that her family’s attempts at intervention fell on deaf ears. Her Moon was conjunct risk-taking Jupiter, indicating a large emotional appetite and a reckless belief that she would be OK no matter what — almost like a teenager. With tough Saturn in Aquarius in her 12th house (the zodiac segment ruled by addiction-prone Neptune and Pisces), she may have had a lot of social anxiety, which she dealt with by numbing herself with substances.

Bobby Brown, her ex-husband, is an Aquarius — his Sun aligns with Whitney’s Saturn, meaning that he would always feel eclipsed by her, unable to “shine” around her. In turn, she would be prone to putting herself down to cater to his ego (she famously and bizarrely credited him with being “the original king of R&B.”)

Oddly, although Bobby Brown is often blamed for luring Whitney into this underworld, their charts tell a potentially different story. Bobby has a responsible Capricorn rising and a service-oriented Virgo Moon. While he may have introduced Whitney to the party scene, her own appetite for escape and intensity was strong. With Venus (her love and social planet) in Leo, Whitney’s cravings were probably 10 times stronger than his. Bobby Brown has the chart of someone who can remain in control even while dabbling in the illicit. It’s likely he spent a lot of time taking care of Whitney when she got out of control, as twisted as that sounds.

But the person we feel for the most in this tragedy is the former couple’s daughter, Bobbi Kristina. Bobbi is a Pisces with Gemini rising and a Cancer Moon. Her Moon sign makes her a true “mama’s girl,” and as a sensitive Pisces, her emotional recovery will be brutal. (Here’s where we cite the selfishness of Whitney’s Aries Moon and Leo Sun.) As a Gemini rising, Bobbi is prone to nervous energy. At some point in her adulthood, she may write a book about the “real” Whitney Houston, and her own childhood. But that would be after years of intensive therapy. Lord knows what the girl has been through, growing up in the shadow of her parents’ addictions and breakdowns. We pray she finds a strong support s