The 2020 U.S. Election will be no less complicated than this entire year has been. Mercury is retrograde until halfway through Election Day in the U.S. Jupiter meets up with shadowy Pluto in Capricorn during the second half of November and sparks a post-election backlash. Plus: a karmic reckoning arrives for Donald Trump’s North Node.

The time has arrived to lay out the Cosmic Electoral College starmap for the November 3 U.S. election between U.S. President Republican Donald Trump and his Democratic challenger, Joe Biden. It’s arguably the most contentious race in modern history after four years of divisive politics and the global Coronavirus pandemic.

Bottom line: it’s a lot to absorb in a year already punctuated with the disruption of our entire reality. Luckily, we have a front-row seat in the political planetarium to help navigate what’s coming. Here’s our forecast for the 2020 U.S. Election.

Mercury is retrograde until Election Day

Mercury, the planet of communication, began its backspin on October 13. This signal-jamming transit occurs three times a year, and this last one of 2020 ends on November 3. It’s also the first time Mercury has been retrograde during an election since the Bush-Gore race of 2000, the outcome of which is still debated to this day.

By now you’re probably used to backing up your work, carefully checking a name on a text message before you press send, and leaving more time to get to appointments when Mercury is in retrograde. But what you may not know is that messenger planet Mercury also rules the Post Office.

If you already mailed your ballot, we hope it arrived safely. If you’re early voting, check and double check you’ve filled in your ballot the way you intend. And if you’re entering the polls on election day, consider going after lunch when Mercury turns direct at 12:50 p.m. EST.

Jupiter visits Pluto in Capricorn, the sign that rules government and hierarchies

On November 12, truth-teller Jupiter meets up with Pluto, a planet also associated with viruses. Their two previous pairings, on April 4 and June 30, coincided with numbers rising in COVID-19 infections. And as of this writing, countries around the globe are locking down again as cases in the U.S. continue to break single-day records. (We predicted earlier this year that many of the world’s pandemics have coincided with Jupiter-Pluto meetups. Read about it here).

Combative Mars unlocks from a two month retrograde in headstrong Aries on November 13. The back half of the month could see an uprising as citizens let out their emotions and pent-up rage. We don’t like to sound alarm bells, but anger has been brewing since Mars began its backspin on September 9, and with a lunar eclipse on the horizon (November 30) in Gemini, conditions are ripe for possible civil uprising.

This lunar eclipse links back to the Gemini new moon on May 22, right before which the death of George Floyd sparked unrest and worldwide Black Lives Matter protests. (Read more about how the North Node in Gemini and the eclipses from June 2020 to December 2021 are changing society.)

Trump’s North Node, which rules karma, travels through his birth sign, Gemini, on November 3. This transit occurs only every nineteen years! And it will travel at 20 degrees Gemini, the exact degree it occupies in his birth chart.

When Trump was diagnosed with Covid-19, the transiting North Node was exactly over his Sun, the ruler of vitality and health. 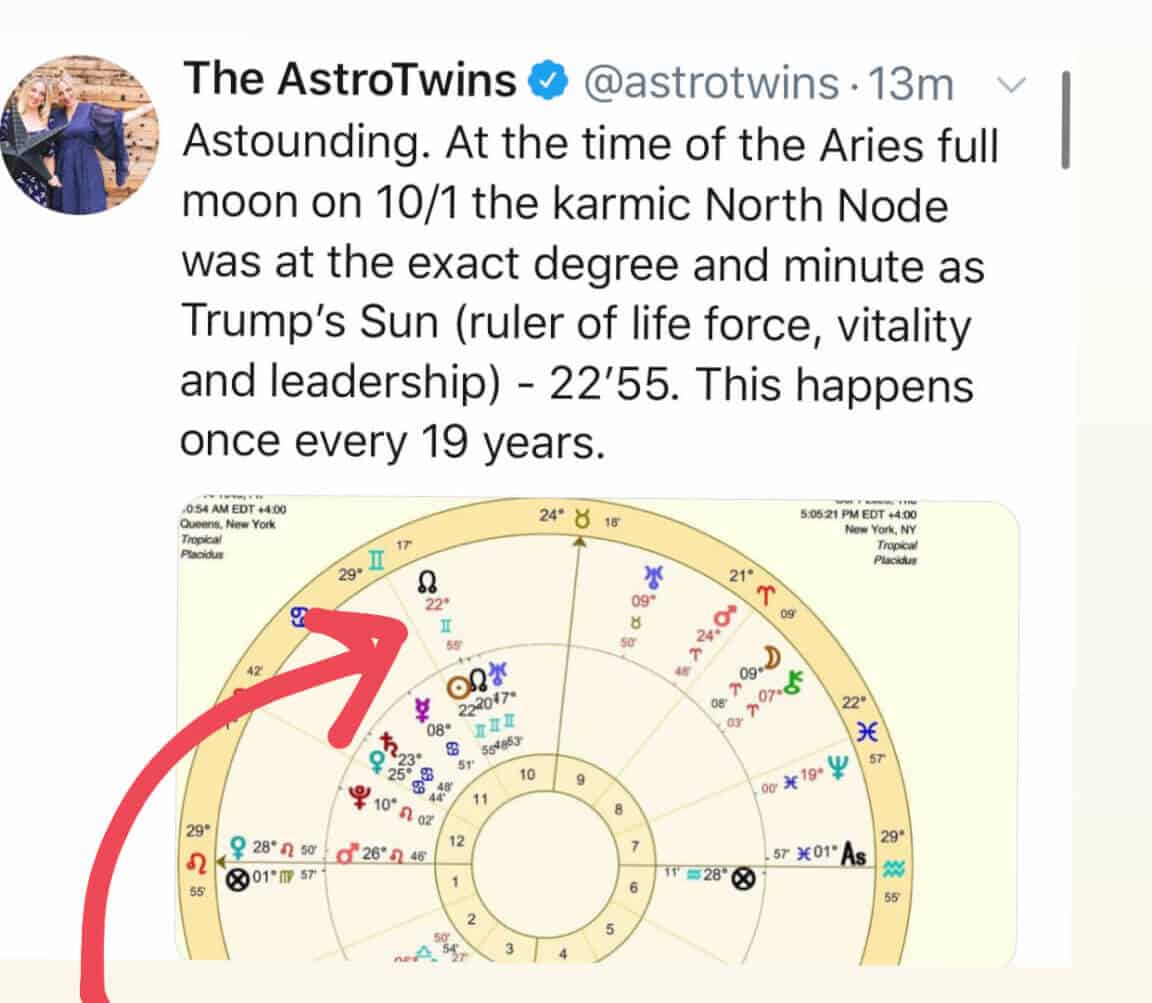 This cosmic timing could also mean a career change is in the stars for Trump. At the last transit of his North Node, in 2002, Trump pivoted from beleaguered business owner to reality TV star with his program, The Apprentice.

Barring a supernatural intervention from a trickster god, uncle Joe Biden appears poised to be the standard bearer for a nation that has had enough of the histrionics from the current occupant of the White House.

But with Mercury (the ruler of Gemini, which is both Trump and Pence’s zodiac sign) retrograde in Biden’s sign (Scorpio) until October 27, then in Harris’ sign (Libra) until November 3, the outcome remains undecided. Buried information could emerge in the eleventh hour, or Mercury’s meddling could give the 2016 Russian hackerbots a run for their fake-news money.

Meantime, do your part to offset the cosmic chaos by following this one-word horoscope, applicable to every zodiac sign: VOTE!

Photo by Glen Carrie on Unsplash