New decade, new you! If anyone has dibs on that mantra, it’s you, Capricorn. 2020 is your luckiest year in over a decade—provided you’re willing to embrace the unfamiliar. Here’s how…

In 2020, worldly Jupiter will soar through your sign, its first visit since January 5, 2009. You may already be shining like a breakout star this New Year’s Day, since the red-spotted planet made landfall in your sign on December 2, 2019. Keep the momentum going! Jupiter will continue to bless you with its abundant beams until December 19, ensuring your Capricorn 2020 horoscope reveals a banner year for growth and expansion.

And that’s hardly the full story! For the majority of the 2020, Jupiter travels astride power-broker Pluto and your ruler, masterful Saturn, as all three planets form a rare series of convergences in Capricorn. So rare, in fact, that this cosmic cluster hasn’t occurred since 1285 C.E.! Thanks to this Sea Goat samba in the sky, many born under your sign will make history as the new decade dawns. Good thing you’re motivated by a challenge! Instead of getting swept up in a competition with the titans of industry, make it your goal to bring forth your best self—perhaps in a public way.

Not sure where to begin? Review all of the vision boards and journal entries from 2019, while Jupiter was meditating in your “woo” twelfth house. Last year, life may have felt stalled in suspended animation. Your intuition guided you, and now, all that randomness could start to make sense. Once you zero in on the right cue or clue, the next steps will become immediately obvious. Trust your instincts! You really learned how to do that in 2019 and it’s a skill to bring into this new year. 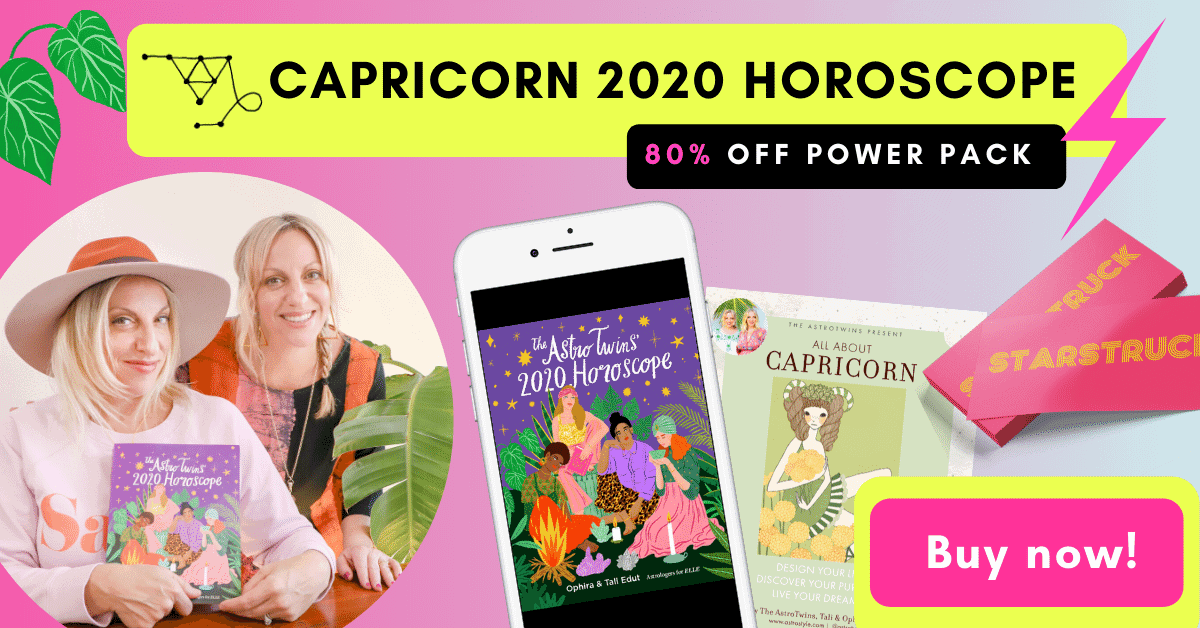 Bottom line: 2020 could be your luckiest year in over a decade…but you’ll have to allow change to happen. Want to know how? Get our 2020 Horoscope book, bundled in a special Capricorn 2020 Power Pack with 3 bonus gifts to keep you aligned all year. Get your Capricorn 2020 Bundle now >

Subterranean Pluto has been helping you plumb those depths since it moved into your sign in 2008. (It remains there for four more years.) And ever since December 19, 2017, your ruler, strategic Saturn, has been touring Capricorn, fortifying that solid foundation you need to stand on if you’re to operate effectively in the world.

As helpful as this planetary pairing has been, it’s aroused its share of angst. Pluto has been poking at the darker corners of your psyche over the past 12 years, forcing you to explore (and hopefully make peace with) your own shadow. Have you discovered some deep-rooted fears or insecurities—or maybe a need to change your life in a fundamental way? Alchemical Pluto’s mission is to help you turn that lead you’ve mined into gold. Continue to explore and embrace your own emotions, perhaps with the help of therapists, healers and coaches. With Pluto traversing 22º29’ through 25º degrees Capricorn, Goats born between January 10 to 18 will be plunged into the deepest inner work this year.

Nevertheless, Pluto will put all Capricorns through paces in 2020. This may involve releasing a few more material-world attachments. Since 2008, changes surrounding money, marriage, career, status and family relationships (all things you hold dear) have felt like tectonic plates shifting beneath your feet. At the same time, you’re undergoing an undeniable spiritual transformation. Fading away is the Capricorn people-pleaser who feels pressured to be the rock for everyone in your midst or to play every game according to society’s rules. And as you release the need for outside validation, you’re becoming a seriously self-authorized Sea Goat! Your unflappable power will continue to emerge and amaze in the year ahead.

On January 12, CEO Saturn and transformational Pluto will mash up at the same degree of Capricorn which could see you stepping out and stepping up, perhaps as the face of a new (green) movement! Jupiter and Pluto will dance cheek to cheek on April 4, June 30 and again on November 12. These planetary paso dobles probably won’t win any Mirrorball trophies. In fact, they could be painfully awkward and here’s why: Authenticity cop Jupiter is all about exposing the truth while secretive Pluto wants to guard every scrap of intel with its life. While you want to keep it real, you may feel unsure about where the TMI line is drawn. How much to share and how much to keep on the downlow?

Warning: You might not have total control over what’s revealed near these three conjunctions. Make sure you can stand behind all of your choices, past and present. Are there skeletons rattling in your closet? (If you’re breathing, the answer is probably “yes.”) If you’re worried yours may come back to haunt you, get ahead of the curve by exposing the story yourself. Better people should hear it straight from your lips than some nefarious “source” who’s not on Team Cappy.

One day to highlight in neon pink is July 5, when the full moon in Capricorn arrives as a lunar eclipse—the last one in a series that began striking your sign on January 5, 2019. Eclipses reveal hidden opportunities, the kind that may be so far off of your radar that it takes some provocative (even shocking) developments to get your attention. The good news is that whatever jaw-dropping events occur in early July may bring much-desired closure—or a milestone moment that you’ve been waiting to celebrate for more than a year.

In 2019, a rare trio of eclipses landed in your sign, which already set these plans in motion. Look back to events that initiated near the solar (new moon) eclipses on January 5 and December 26, 2019. You may launch the next leg of this mission around July 5, 2020. Did something come to fruition within a month of the July 16, 2019, lunar (full moon) eclipse? History may repeat itself, but with an upgraded twist. Or, a missed opportunity from last July could present itself again. This time, be ready to carpe diem!

Ready for a prosperous reinvention tour, Cap? Get the full report instantly in our Capricorn 2020 Power Pack — and 3 bonus gifts! >

Radical Uranus is officially buzzing through Taurus for its first full year, activating your fifth house of romance, glamour and fierce self-expression. Can love and freedom go hand in hand? That’s a worthy exploration! During this eight-year Uranus cycle (which lasts until 2026), you won’t take kindly to anyone trying to tamp down your individuality. Some Capricorns may embrace their single status wholeheartedly, while others will want to balance sacred solo space against time spent with a significant other. With two Cancer eclipses firing up your relationship house, on January 10 and June 21, a partner may demand clarification and exclusivity. Those eclipses can also jailbreak Capricorns from any confining relationship agreements that have you feeling more suffocated than sexy.

Adding to this, love planets Venus and Mars will turn retrograde in 2020. While these reverse commutes can feel like setbacks at first, they are also blessed timeouts that allow you to review the way you “do” relationships. First to snooze will be peacekeeping Venus, who retreats through communicative Gemini and your sixth house of structures from May 13 to June 25. Time to negotiate new terms with your partner? You’re a creature of habit, Capricorn, but a romance may hit the rocks if you’re simply going through the motions. Drop the assumptions and get into dialogue about what each of you wants. Yes, you need your daily RDA of work time, exercise, relaxation and so on, but you may want to shift your schedule to accommodate the one you love.

Mars shifts into reverse from September 9 until November 13 in Aries and your fourth house of security, family, home and roots. Tension under your roof could mount, especially if you don’t have enough privacy and space for yourself. A love interest could pressure you to move in together, or if you already cohabitate, you may decide to rent a studio/work space outside of the house so you can have what Virginia Woolf dubbed, “a room of one’s own.” A little absence can definitely make the heart grow fonder as long as you don’t go AWOL on your peeps.

Capricorn season begins on December 21 along with one of the year’s major cosmic events, called the Great Conjunction. This historical happening occurs approximately every 19 years, when Saturn and Jupiter make an exact alignment and combine their powers. In many ways, these two planets are total opposites. Saturn is the ringed taskmaster who moves slowly (and steadily) toward crushing every skill. Jupiter is idealistic, whimsical and broad-minded. Saturn streamlines; Jupiter expands. Together, they can deliver the perfect hybrid of traditional wisdom and daring exploration. In 2020, their meetup takes place at 0º29’ Aquarius, activating your solar second house of work and money. What pot of gold will this “rainbow connection” lead you to, Capricorn? You may find it abroad or in your own backyard, but either way, you’re likely to end the year with a giant leap towards prosperity!

Ready for wild new adventures in your love life, Cap? Get the full scoop instantly in our Capricorn 2020 Power Pack — and 3 bonus gifts! > 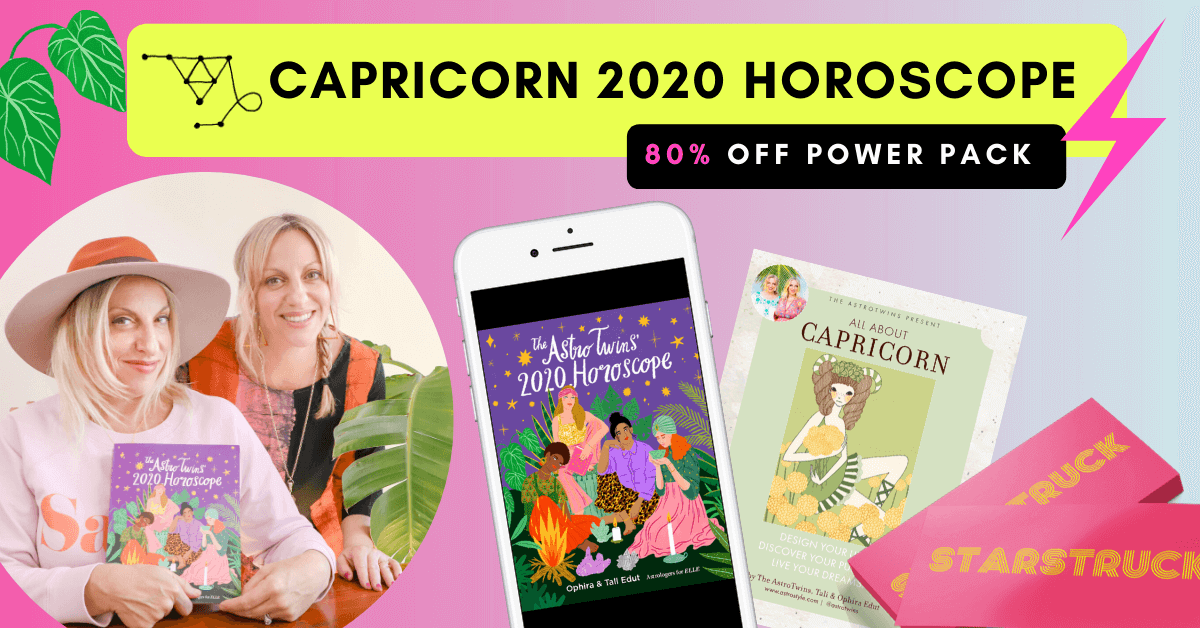