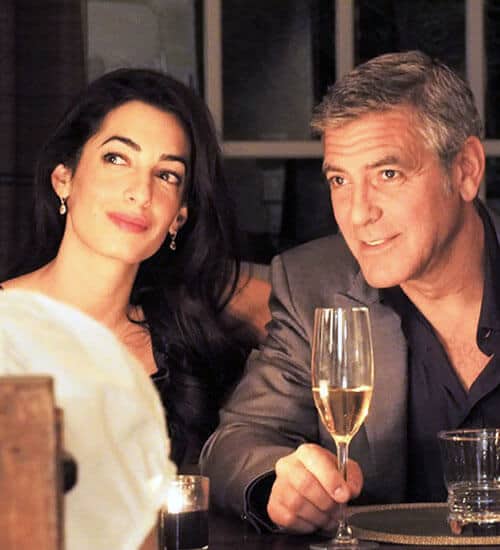 Over the years, George Clooney has claimed that he’d never marry again, and indeed, he seemed well on his way to proving that. However, we know that security-minded Taurus men—yes, even Clooney—always want to mate for life. It was just a matter of time (fine, a loooong time) before this handsome holdout found someone “worthy” and took himself off the market. That person is 36-year-old Amal Alamuddin, an impressive Lebanese-British barrister whose astrological sign we’ve found out (thanks, readers!) is Aquarius. The Taurus-Aquarius love match isn’t always an easy one since they are both stubborn “fixed” signs, but when it works, it works.

Bonus: no cheesy portmanteaus can be made from their names: #Alamooney just doesn’t quite fly. Now, here’s hoping he takes it all the way to the altar. And, while we’re not ones to boast, we have to claim our astrological bragging rights—we called George Clooney’s engagement in the New York Daily News in our predictions for 2013! (See the article here.) Let’s throw another prediction in for good measure: from July 16, 2014-August 11, 2015, expansive Jupiter will be in his home and family sector, a time when pregnancies are likely. Next Clooney curveball: parenthood? Here’s why we knew that George Clooney would marry again—eventually:

Taurus men are always looking for a wife.

Wife or bust! Taurus wants it all. And while his sensual sign doesn’t like to sleep in an empty bed, he’s not just looking for a warm body, either. The single Taurus man is constantly in “interview” mode. He carries a mental checklist of his soulmate, and screens every woman he meets to see if she fits. Although he might accept a temporary substitute, he’s not afraid to drop her if the perfect match appears. Generally, he’ll hold out for the real thing, breaking many hopeful hearts along the way. Taurus will date a model, an actress, a woman from humble means. But the secure Bull always feels entitled to the full package, and will be a serial monogamist until that person comes along. (To read more about the men of every sign, see the Manstrology section of our site, or our book Love Zodiac.)

Many have forgotten that George Clooney was married, to Pisces Talia Balsam, from 1989-93. In his words about marriage, he “wasn’t very good at it.” Once bitten, twice shy is this zodiac sign’s M.O. (Taurus Robert Pattinson knows this literally and figuratively, after his public post-vampire heartbreak with Aries Kristen Stewart.)

Taurus men want a woman they can brag about.

And not just for her good looks. Sure, Taurus men enjoy having a pretty woman on their arm. But to play the part of wife-for-life, this beauty had better accessorize with some impressive career credentials. Let’s face it, “multilingual, Oxford-educated international human rights lawyer voted a ‘barrister hottie'” probably trumps WWE wrestler and cocktail waitress in the Taurus man’s (admittedly snobby) book. And hey, George Clooney is an international human rights activist himself, with his Not On Our Watch anti-genocide project. Power couple, anyone?

That’s a common trait that we’ve all heard, but it’s true. This sign doesn’t change his mind easily, which is why George Clooney labeled himself as not the marrying kind—unless otherwise notified. And now, we’ve been notified.

Taurus is a cautious investor.

Loyal Taurus is a sign that hates change, and wants to be thought of well. Bulls are the investors of the zodiac, so if they’re going to put time, energy and full-spectrum emotion into a relationship, it had better have some serious ROI. Marriage has to happen in, well, a “bull market” or they simply won’t risk their blue-chip reputations.

And for reasons of astrological chart & timing…

Saturn, planet of maturity, is in George Clooney’s marriage house.

Every 28 years or so, wise Saturn returns to the sign opposite ours, the house that governs marriage and partnership. Since Saturn makes us more serious and commitment-minded, it can put us in a marriage mindset. Saturn is in Scorpio, the marriage house for Taurus (based on their solar/Sun sign charts), from October 2012-September 2015. With Saturn here, the strongest unions make it to the altar and the weak links in other matches are exposed. This make-or-break cycle has affected many Taureans, including Tori Spelling (who discovered her Scorpio husband Dean McDermott had cheated), RHOA’s Kandi Buruss (who recently wed), and of course, Clooney. Based on his natal (birth) chart, George Clooney has Saturn transiting his eighth house, which also rules marriage, perma-bonding and til-death-do-us-part commitments. So there was a double dose of cosmic heft pushing him in this direction.

The moon determines your emotions, and Capricorn, like Taurus, is an earth sign that likes to build security. Capricorn also rules wisdom and maturity, and Capricorn moon people often become emotionally softer and more available later in life. The rising sign gives us our overall orientation to life, and a Pisces rising is a true romantic who lives for love and fantasy. (Read about moon and rising signs here or do a free chart to find yours!)

The news broke at a Taurus eclipse.

New attitude? Every 9 years, each zodiac sign gets a two-year series of eclipses touching their sign as well as their partnership sign. This can completely overturn their attitudes toward relationships, and cause a sudden change of identity. Since November 2012, there have been a series of change-making eclipses on the Taurus/Scorpio axis, revamping George Clooney’s approach to pairing up. April 28, 2014 marks the grand finale of this eclipse series—just a couple days after the “breaking news” of his engagement to Alamuddin.