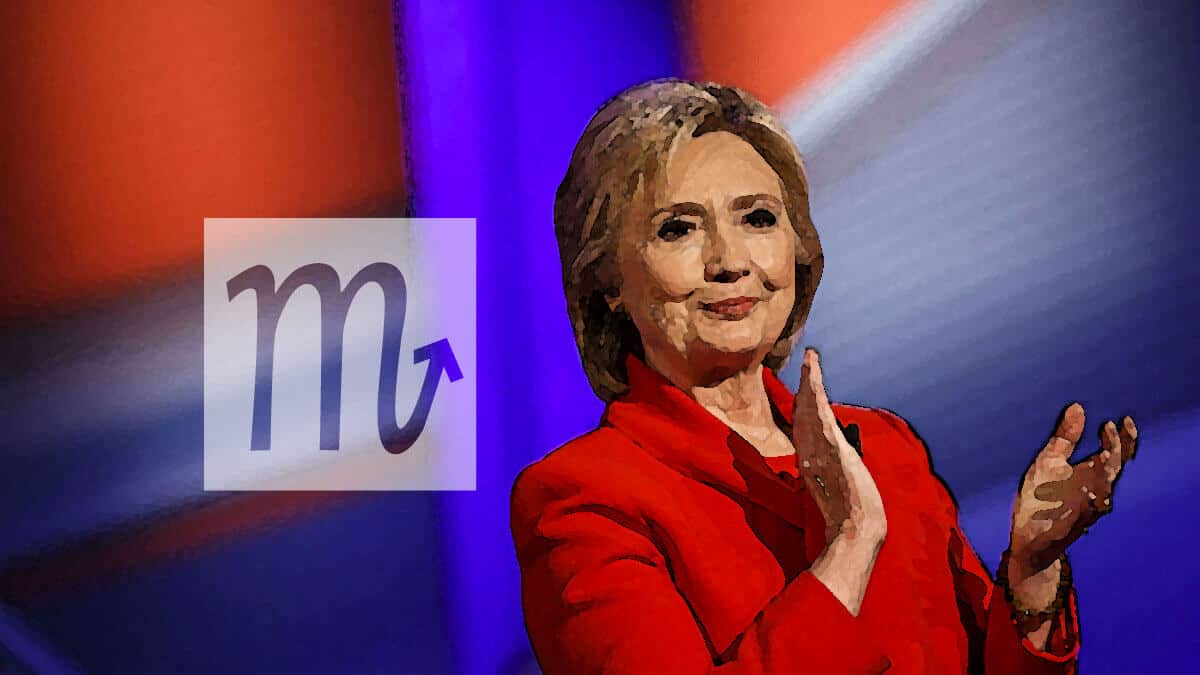 Our look at the horoscope of Hillary Clinton, a Scorpio with Pisces moon and a mysteriously unknown ascendant.

What does Democratic candidate Hillary Clinton’s astrology chart reveal about her? Here’s what the stars have to say.

Hillary Clinton’s chart, based on speculated time of 2:18 am: 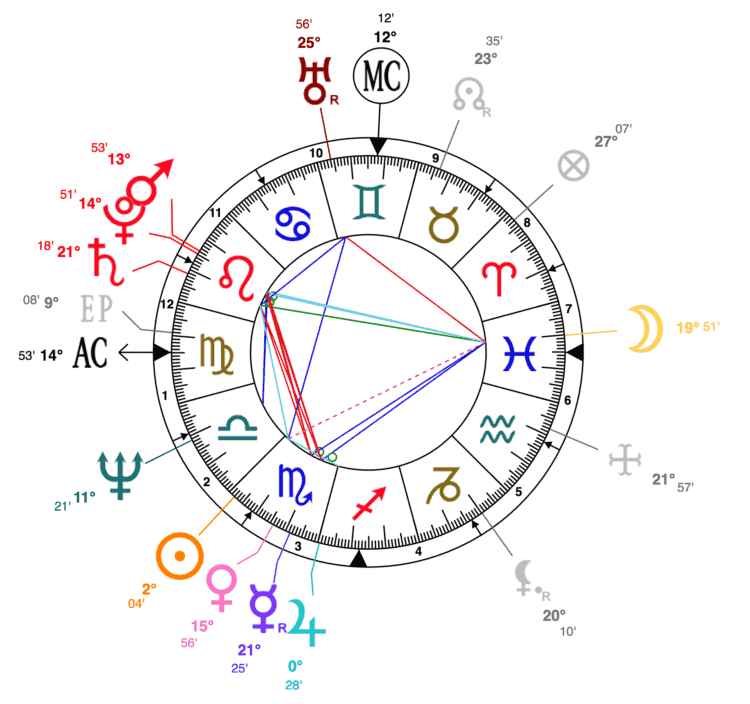 Secrecy in the stars: Sun in Scorpio

Hillary Clinton is a Scorpio—a sign known for being mysterious, strategic and driven to achieve. The Sun governs the public side of one’s personality and those born with el Sol in private Scorpio don’t always feel so comfortable being scrutinized. This is a sign that prefers to work its magic behind the scenes as Clinton has through her decades-long career in law and politics, graduating from First Lady to Secretary of State before picking up the presidential nomination. Scorpio is the alchemist; this sign knows how to take lead and turn it into gold. They will work tirelessly towards transformation, especially when they are in the highest expression of their sign, the soaring phoenix rising from the ashes.

Natural auditors and detectives, Scorpios will obsessively research until they crack the case and Clinton has the Sherlock gene. Shortly after graduating from Yale Law School, she was part of the presidential impeachment inquiry committee advising the Judiciary Committee of the House of Representatives during Richard Nixon’s Watergate brouhaha. Whether someone else’s or their own, secrecy and scandal often follow Scorpios. Indeed, Clinton’s roster comes with the classic Scorpio grey areas and cover-ups. From the Whitewater real estate deals of the 70s and 80s to the Benghazi deaths to the deleted emails on her illegal, private server, she has drawn plenty of fire along her campaign trail.

Scorpios can be calm, cool and collected, but they are not really a crowed to be messed with. This is the sign that rules revenge, and they wait for the perfect time to unleash. After enduring a stream of trumped-up conspiracy theories and even withering comments about her ass (yes, this happened) the televised presidential debates gave Clinton golden opportunities to unleash her stinging slings like, “Alicia Machado,” “Trumped-up, trickle down (economics)” and “You know what else I prepared for? I prepared to be President. And I think that’s a good thing.” Touché, Scorpio!

Not only is Hillary’s Sun in Scorpio, but her Venus, Mercury and South Node also reside in this esoteric sign. Her birth time remains a “guesstimate” of 8:00 AM, which would also make her rising sign (ascendant) Scorpio. Woosh! Other sources cite right at midnight, which would give her a Leo rising, and Astrotheme lists a very specific but unconfirmed 2:18am, which would give her a Virgo rising.

Mercury is the planet of strategy and communication while Venus dictates her feminine expression. Hillary Clinton has been notoriously tight-lipped and hard to read, particularly in her personal affairs. Decades after Monica Lewinsky’s stained blue dress made headlines, we are still wondering how she kept such a brave and stoic face in the public eye…and if she smashed any plates in the White House china cabinet, maybe? Or did she wage a Scorpionic cold war, getting her just desserts by sticking around to break down Bill’s swagger?

So many unanswered questions…but the relentless public scrutiny about Clinton’s emotional state is honestly just another symptom of sexism. Our society just expects a woman to fall to pieces in the face of a personal storm. Hillary gave nothing to the tabloids but a show of extreme Venus in Scorpio loyalty to her husband and family, which also left people wondering if she was being strong or a sucker for the love of (Leo) Bill.

With all her icy-cool Scorpio in the mix, Clinton has had to work a lot harder to be likeable than many other candidates—and certainly more so than President Obama, a Leo Sun with affable Aquarius rising. The hawkish nature of a Scorpio can be so focused on getting results that they forget about extending the all-important human touch. With her South Node (the “past life” point) in Scorpio too, her elusive vibe is one she’s carried from other incarnations. But Scorpios can flip the switch quickly, turning on the charm and revealing the depth and devotion this sign is also famous for. When a Scorpio loves you, they are in for life—but it would be nice if they informed their faces of their feelings. Surely, Clinton tapped into that magnetism when negotiating the Israel-Hamas ceasefire and visiting a record-breaking 112 countries during her four years as Secretary of State. And while she’s been under the gun in ways many male politicians will never experience, she’s maintained extreme cool in the face of scrutiny—qualities one should celebrate in any presidential candidate, male or female.

The moon governs one’s inner world—emotions, desires and urges. Hillary Clinton was born with her moon in plumb-the-depths Pisces, the zodiac’s most compassionate and idealistic sign. Clinton’s early work as an attorney was at The Children’s Defense Fund. As the First Lady of Arkansas, she focused on reforming public schools. At the U.N.’s Beijing Conference in 1995, she famously declared that, “women’s rights are human rights,” positioning herself as an activist for women around the globe. The charitable Piscean energy may have lent a role to the establishment of The Clinton Foundation.

And while Clinton may not have Trump’s on-air charm, many remark that she is warm and personable during her live appearances. Perhaps her compassionate Pisces moon has an easier time peeking through when her Scorpio side isn’t activated by the media’s scrutiny. And it may very well be this lunar impulse that allowed her to forgive her husband’s public infidelities. That said Pisces is the sign of denial: Was she truly letting it go or just “looking the other way?” We have to wonder about this when it comes to the scandals Clinton has been fingered for. Was she just in denial or a fog about those Benghazi warning emails? A Pisces moon can conveniently “forget” the things they don’t want to deal with—something she won’t be able to do as Commander In Chief.

Saturn, the planet of restriction and time-honored achievements, lands in Leo in Clinton’s chart. While Leo is the sign of leadership and royalty, Saturn’s influence will not hand over the keys to the kingdom until they’ve been earned the hard way. Indeed, Hillary Clinton has made a long, slow climb to the top with decades of service—even playing Best Supporting to her husband Bill as the Governor of Arkansas and U.S. President. Two Leos—namely her husband Bill and Monica Lewinsky—were a Saturnian thorn in Clinton’s side, bringing a maturing experience and a difficult choice: to put on a brave face or divorce? 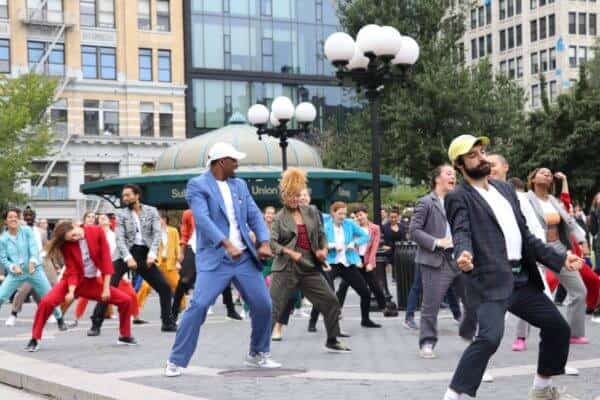 While Leo in the chart generally makes one a darling of the cameras, stoic Saturn can counteract that effect. From the media’s perspective, Saturn in Leo has also given Clinton a bit of a public image problem. Her style has been widely criticized—although we are endorsing our friend’s hashtag-driven campaign #pantsuits4hillary with aplomb! A Pantsuit Power flash mob even broke up a month before Election Day. Clinton has been judged harshly (and unfairly) for her looks, her voice, her laugh—and of course her “lion’s mane” of hair. The silver lining of this scrutiny is that Clinton has earned her rise to the top based on merit and experience. She’s no newbie to Capitol Hill and her years of experience will make her a seasoned leader.

As polarized as Donald and Hillary may be, this is one commonality in their astrological charts. Both candidates were born with aggressive Mars and power-obsessed Pluto side-by-side in Leo. This confidence-boosting duo definitely warms up all the chilly Scorpio vibes in Clinton’s chart—and gives her a hand in the public speaking department. This Mars-Pluto pairing certainly makes both candidates hungry for power. There can be an impatience (Mars) that leads to sneakiness (Pluto), and Clinton has been one to bend the rules for her will. Yet this potent planetary duo also gives her the regal stance befitting a Commander In Chief—and the ego strength to take all the frat-boy level critiques flung her way. Romantically, Mars and Pluto in Leo make Clinton attracted to a virile mate. The potent charm of Leo Bill Clinton is well documented by women who have swooned upon meeting him. But we’re guessing Scorpio Hillary can hold her own behind closed doors. ‘Nuff said.

The geeks shall inherit the Earth! Jupiter, the planet of good fortune and expansion is parked in its home sign of Sagittarius, the sign that governs higher education, global relations, travel and the law. This placement was certainly advantageous for Clinton’s diplomatic missions and her tenure as Secretary of State. Clinton’s “geek chic” has made her an avid learner and researcher with a Yale degree in Law under her red pantsuited belt. And she stands proudly as an example of a smart and ambitious female role model. But Jupiter is also the capricious gambler—and doubly so in Sagittarius. This placement can make one prone to taking foolish risks like taking foreign donations for the Clinton Foundation while in office—a move that could be seen as a clear-cut conflict of interest.

Stamina, anyone? North Node in Taurus

Bring on the fact checkers! The North Node in the destiny point in the chart—an energy that people have to reach for in order to incorporate. Clinton’s North Node is in grounded, by-the-books Taurus—the sign of (ahem) stamina—and oh, is she getting lessons in that arena. Taurus is the opposite sign to Scorpio (where Clinton’s South Node resides). Instead of being secretive, this sign is black-or-white about matters. Taurus North Node people need to learn how to adhere to process and follow the rules. Perhaps the embarrassment of her private email server scandal will be enough to catapult Clinton into the ethical energy of her North Node. Skip the shortcuts Hillary and you’ll come out “strong like Bull.”

While Donald Trump has a band of airy Geminis and verbal Virgos—all mutable signs ruled by sharp-tongued Mercury—Hillary’s hydrogen-powered camp is heavy on the water signs, thanks to her Scorpio Sun sign and Tim Kaine’s Pisces Sun sign. Interestingly, both Tim Kaine AND Mike Pence have their moon sign in fast-talking, dodgy Gemini, which explains why the Vice Presidential debate was a circus of circular arguments, interruptions, denials and fudged facts. Water signs tend to be more emotional and reactive, perhaps also explaining why Kaine’s debate demeanor came across as overwrought. That said, Pisces can be champions of the underdog—and they happily stand beside a powerful alpha female in a supportive role. 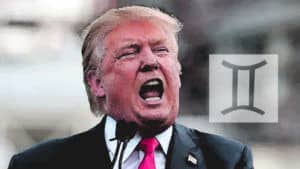 Pin
Next up: Read our analysis of Donald Trump’s horoscope >