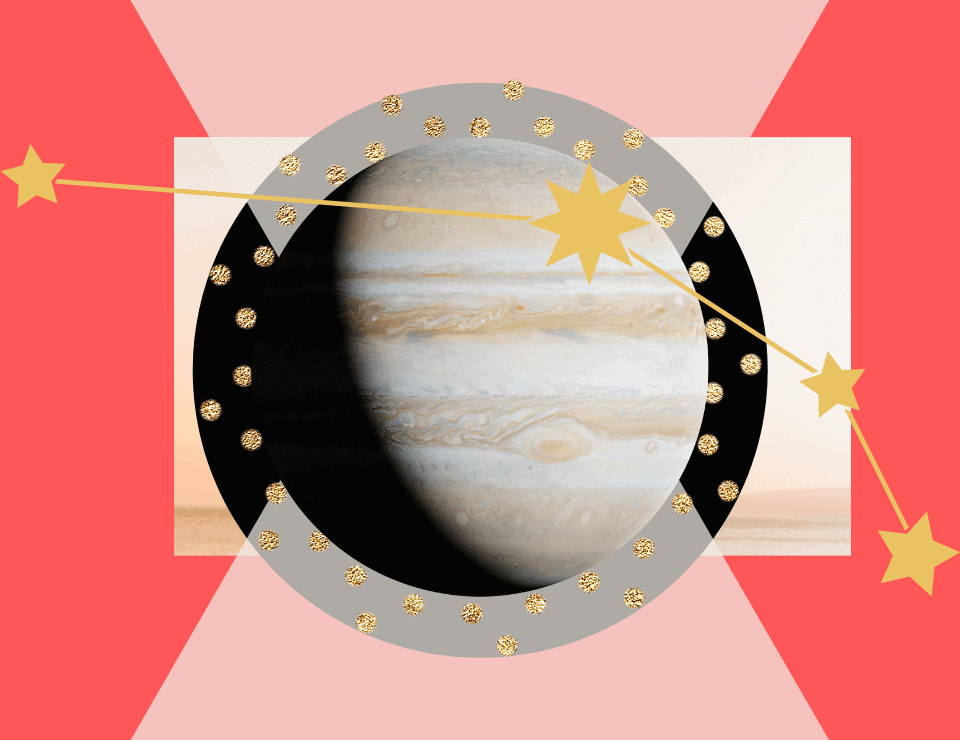 Jupiter in Aries 2022 means exciting developments, and possibly some friction, lie ahead

Wise, wild Jupiter is the galactic gambler, the global nomad and the eternal seeker. We’ll all feel the effects of the Jupiter in Aries 2022 transit, as this planet travels through the zodiac signs.

When will Jupiter enter Aries?

On May 10, it moves out of dreamy, compassionate Pisces into high-octane Aries for five months.

Until October 28, the Jupiter in Aries 2022 transit means exciting developments, and possibly some friction, lie ahead.

Is Jupiter good for Aries?

Talk about a surreal shift! Pisces is the final sign of the zodiac, akin to the elder state where we transition from earthbound beings to eternal souls. Aries is the first sign of the zodiac; the instinctual infant. Through the Aries lens, every experience is either a brand-new wonder or cause for a tantrum. If you feel like Benjamin Button this year, we wouldn’t be surprised. Endings and beginnings will be profoundly magnified as Jupiter dances from the finish line to the starting line, then back again.

What does Jupiter mean in astrology?

The fastest spinning planet in the solar system, developments happen rapidly in this powerhouse’s path! Jupiter’s job is to push us out of our comfort zones and into uncharted territory—even if that means leaping before we look. The point is that we jump, as far as Jupiter’s concerned. With each clumsy dismount we figure out how to do it better next time. It’s all about failing faster and then getting up to try, try again.

Regardless of which zodiac sign Jupiter is orbiting through at any given time, there are bound to be exciting developments. Higher learning and philosophy fall under its reign. Here’s where we collectively expand and elevate to the next level of human development! But how much is too much? Like a giant cosmic spotlight, Jupiter exposes flaws in the machinery and might even reveal a scandal. Issues of global importance are also spotlighted under Jupiter’s watch and often dominate the news headlines when Jupiter has a moment.

What does Jupiter in Aries mean?

Jupiter’s shift from Pisces to Aries can be jolting, like waking from a deep meditation to the jarring blare of a fire truck’s siren. As the veil of illusion (and delusion) lifts on May 10, your vision will sharpen like a hawk’s. Whatever you’ve been ignoring will suddenly feel like a code red emergency that must be handled, stat!

When Jupiter last cycled from Pisces into Aries in 2011, tragic tsunamis struck Japan, sweeping away 20,000 lives and triggering explosions at the Fukushima nuclear plant. We pray to never witness a tragedy like that again. Yet, you may feel on high- alert mid-year as the red-spotted planet keeps everyone on edge.

But, whoa! Although first instincts can be reliable guides, they don’t provide the entire road map. Use them like wakeup calls, then take time to strategize. Controlling reactive urges won’t be easy, as hotter heads prevail while Jupiter’s in Aries—and may lead people to lash out in regrettable ways. Take your time before going into warp speed.

What happens when Jupiter transits Aries? A history

Jupiter in Aries periods are often marked by friction, both in our personal lives and across international borders. Aries is the sign of the warrior and Jupiter amplifies whatever energy it touches. During the 1917 Jupiter in Aries cycle, the United States joined then-allied Britain, France and Russia to fight World War I. The start of World War II happened in 1939, during this same transit.

Sadly, violence may escalate while zealous Jupiter runs its midyear combat mission. Everyone will have an opinion, yet no one will be eager to back down. During this transit, fighting for our beliefs can feel like a “do or die” proposition. Dystopian frustration may evolve into a full-scale uprising, as was the case during the Arab Spring of 2010, which dovetailed with a Jupiter-in-Pisces-to-Aries transit.

Considering the easy access to automatic weapons and “ghost guns” (untraceable, Lego-like assembly weapons), safety concerns may mount. With militant factions forming around the world, ideological and religious disagreements are already escalating into rogue violence. In the U.S., armed civilians have been playing vigilante in alarming ways in recent years, attempting to intimidate voters at polling sites and storming the U.S. Capitol on January 6, 2021. Gun laws and 2nd Amendment rights will be hot ballot items for the 2022 Midterm Elections. In September of 2021, Texas passed a law allowing most citizens to openly carry guns without obtaining a permit or training. (This despite the statistic that shootings increased 14 percent the same year.) During the 1999 Jupiter in Aries cycle, the tragic Columbine High School massacre took place.

We aren’t trying to scare you here! But we’d be remiss if we didn’t add a precautionary measure for the middle of 2022. Sometimes, it’s necessary to fight the good fight by being forewarned, especially when justice is being infringed upon. As principled Jupiter in Aries sounds the clarion call for personal power, “going to battle” may seem like the only option. And sometimes, it’s essential, especially if human rights are in jeopardy. This year, make sure the cause you’re fighting for is grounded in fact-based evidence. In some cases, what looks like a revolution might simply be a distraction that leads you further away from your power. Angry, disenfranchised masses may be easily manipulated by narcissistic extremists who are preying on their emotions. Practice self-defense, an Aries protective measure, by always thinking for yourself.

What does having Jupiter in Aries mean for 2022?

While it may be a study in contrast, Jupiter in Aries can underscore the need for peace. The first worldwide meditation occurred on August 16-17, 1987, during the Harmonic Convergence. As seven planets (in fire signs, including Jupiter at 29° Aries) assembled into a harmonious Grand Trine, people gathered at energy centers from Mount Shasta to the pyramids of Egypt to send up a collective “Om!”

Anything that soothes the psyche and helps you get centered is worth trying when Jupiter’s blazing a fiery trail through Aries. Transcendental Meditation, which originated in India in the mid-1950s with Maharishi Mahesh Yogi, gained mass popularity while Jupiter was in Aries in 1975- 76. Devotees of TM conducted a study in Washington D.C. in 1993. The goal was to see if collective meditation could reduce violent crime in the city. Although hard to prove directly, crime statistics did indeed drop during the time of this experiment. Practices like these may become more prevalent as Jupiter in Aries ratchets up fear and anxiety.

If there’s friction in your household or among the people you gather with regularly, do your part to deescalate the drama. Prevention is even smarter: How can you dial down stress in your environment? Little things, like moving out clutter, plugging in an aromatherapy diffuser and playing calming music can make a world of difference. Or it might be time to bring in the big guns—and we do mean metaphorically, not literally. Skilled mediators and counselors can help restore peace when no one is willing to declare a ceasefire.

So if you must be a warrior, how about being a “warrior for love” or a “freedom fighter” who doesn’t need to take up arms, unless you’re (safely) encircling someone in a hug? While Jupiter blazed in Aries in 1987, Britain’s Order of the Garter—the most exclusive and prestigious level of knighthood—opened to women for the first time in history. That’s more reason to aim for the honorable side of Aries instead of the hot-headed one. Batman made his first appearance in D.C. Comics with Jupiter here in 1939.

Blaze your trail! Expansive Jupiter in innovative Aries is a time for bold possibilities. Take those “wouldn’t it be crazy if…” ideas for a test run. Let things get messy. That’s how great discoveries are made, like penicillin, which was revealed to destroy staphylococcus cultures in researcher Alexander Fleming’s petri dishes when Jupiter was in Aries in 1928.

Although the Jazz Age wasn’t going full throttle until the 1920s, the style began evolving out of ragtime in 1916-17, while Jupiter was in Aries. The swinging, rhythmic Down Home Rag was recorded twice during that period, once by the instrumental quartet the Versatile Four, and again by the original composer Wilbur Sweatman.

Whatever your medium, tap the originating powers of Jupiter in Aries for a creative breakthrough. The trick? Letting yourself experiment wildly and make “mistakes” instead of diving in with an outcome in mind. When Jupiter cycled through Aries in 1975, DJ Grand Wizzard Theodore invented the record scratch by sheer accident. As the story goes, he tried to hold a spinning record in place so he could hear his mom talking—a happy “slip-up” that brought an essential element to the art of deejaying.