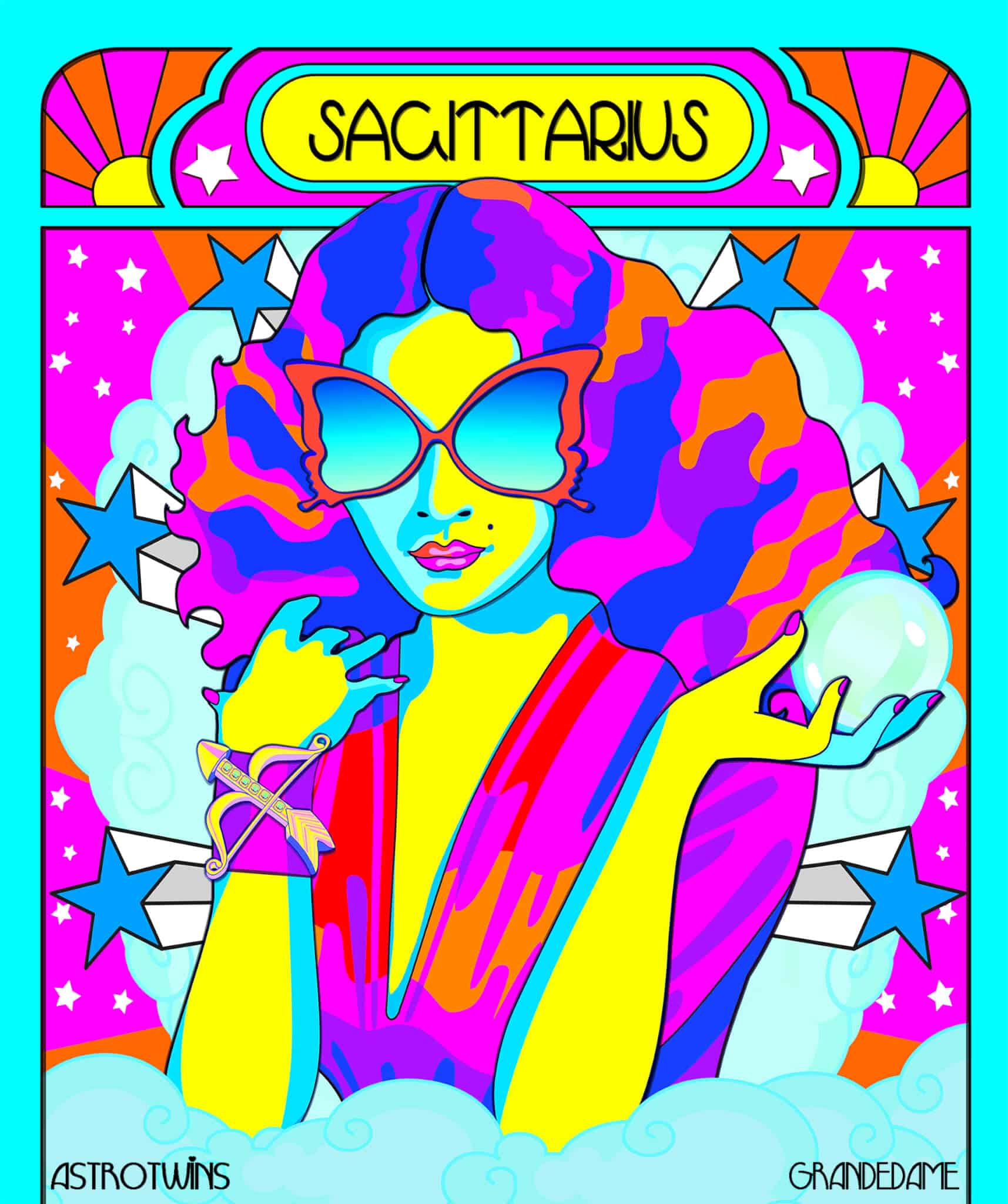 Emerge from the depths—exuberant Sagittarius season is here! The sun graces this worldly and expansive sign from November 22 to December 21, 2019. Turn your focus to wide-ranging connections, inspiration, and making your voice be heard.

Every 30 days or so, the Sun visits a new zodiac sign. During this “season” you’ll feel the prevailing astrological energy—no matter what your Sun sign. So raise your hand if you’re ready for holiday cheer during fun and festive Sagittarius time. As the intensity of Scorpio season wanes, you’ll emerge from the chrysalis transformed, inside and out.

Have you been hibernating alone (or with a sexy plus-one) for the past month? Come out, come out wherever you are! A spirit of adventure may overtake you in a big way—and what a refreshing change. After a month of focused Scorpio energy, you can adjust your viewfinder to a broadminded, wide-angle lens.

As the star sign of the courageous, worldly Archer, high-minded Sagittarius represents endless possibilities. Life is worth celebrating! Bring on the positive thinking! Think: Sagittarius Dale Carnegie, born November 24, 1888, whose “How to Win Friends and Influence People” was the world’s first truly influential self-help book.

Sagittarius is the second of the zodiac’s three fire signs and part of the “mutable” quality (or triplicity). Mutable signs (the others are Gemini, Virgo and Pisces) are all about change and variety. These spontaneous souls may not be masters of long-range planning, but you can call them up for an impromptu coffee or karaoke outing, and they’ll be there with bells on—or some other flashy outfit you can’t even imagine. Picture Sagittarius Miley Cyrus riding the wrecking ball or Janelle Monae’s flamboyant suits.

Archers are natural editors, critics, and curators, gifted at refining what other zodiac signs create and perfecting the final product, like Sagittarius Bill Nye the Science Guy who makes the scientific discoveries of others fun and interesting to regular folks. (We’re still salty about his dismissive attitude about astrology…but we’ll save that for another article!) Mutable signs are flexible, adaptable and get along well with all sorts of people—and we could all use some of that energy right about now.

“Anywhere but home” always seems like the ideal destination for Sagittarius season. Take inspiration from the classic “Fly Me to the Moon,” by Sagittarius Frank Sinatra (born December 12). And while Jupiter and Mars may be out of reach, we’re betting there’s still plenty to discover here on planet Earth.

Alternately, if your GPS coordinates are firmly set at “mi casa,” set the table for an array of out-of-town guests and a diverse group of friends. ‘Tis the astrological season for mingling with a wide-open heart and door.

Here are five ways you can tap into Sagittarius Season spirit and channel its fiery courage between now and December 21:

Sagittarius is the zodiac’s eternal optimist—couldn’t you use some glass-half-full perspective now? Studies have shown that positive thinking correlates to well-being, and helps you to lead a richer, more fulfilling life. After an intense, tunnel-vision Scorpio season, this new month-long cycle grants you the ability to step back and view the big picture. Philosophical Sagittarius helps you reflect, step into other people’s shoes, and see the whole forest—not just the trees.

A word of warning: This does not mean painting a shiny coat of B.S. over reality. As Sagittarian Samuel L. Jackson said, “Just ‘cause you pour syrup on something doesn’t make it pancakes.” Sagittarius can be positive to a fault, falling in love with people’s potential or charging ahead on a project based on sheer positive thinking. While this solar cycle can make us all a little luckier than usual, there’s a difference between taking a calculated risk and a wild gamble. Make sure you know where that line is drawn.

2. Employ humor as your superpower.

Sagittarius is the master of the pun, seeing the divine comedy in life. During this solar season, humor can be catalyst for activism and a tool for dealing with circumstances that are too overwhelming to comprehend. As Sagittarius Mark Twain put it, “Against the assault of laughter nothing can stand.”

Laughter may very well be the best medicine, according to this recent Washington Post article. Among its benefits? Stimulation of the brain to release more endorphins and strengthening of the immune system. We’ll take an infusion of that, thanks!

Sagittarius rules publishing, making this primetime to build a platform to spread a positive message. That’s probably why so many famous authors, from Jane Austen to C.S. Lewis to Philip K. Dick, have been born under this literary sign; along with mic-dropping Centaurs Jay Z and Mos Def. It’s a busy time of year, but that doesn’t have to derail your dreams of becoming the next Si Newhouse. While you’re out and about, think like a journalist. Every soirre is also a story lead and an Instagram carousel waiting to unfold. And every family gathering could provide footage for a future documentary.

Even if you’re more of a consumer than a maker, you can sharpen your “media literacy” and help advocate the spread of it. We can’t stem the tide of information in the digital age—but we can learn to read and digest it critically. The power of the pen (and pixel) goes both ways—so remember to post and consume mindfully. Don’t believe the hype! Check the “facts” against credible research from multiple sources. And even then, remember that every story also has the writer’s spin on it. Take it all in, then form your own opinions.

We live in a diverse world, and astrological ambassador Sagittarius is here to stretch us beyond familiar terrain. Planning travel? Go see how other cultures live, making sure you veer off the tourist-y path and into real civilian areas. This principled solar energy may inspire voluntourism, perhaps to support some of the disaster-stricken areas that are still in need of help.

After a few years of attempted travel bans, border wars and xenophobic headlines, we need to connect as humans more than ever. We may come from different backgrounds and beliefs, but a shared desire to live freely as ourselves ignites the human spirit. During Sagittarius season, put a few destinations on your bucket list and start researching. For inspiration, pick up a copy of the hilarious travel book “The Lost Continent,” by Sagittarian Bill Bryson.

Have you mastered a skill? Maybe it’s time to turn it into a bona fide workshop to pass on your knowledge—and hey, even leave a legacy. Or better yet, how about leading a retreat? That’s all the better under this worldly zodiac influence. (Now…should you host it in Tulum, Bali, or maybe the South of France?)

Warning: Sagittarius can get preachy but as an impulsive, impatient fire sign, may fail to back up those zealous words with action. Have you been shouting in the metaphoric bullhorn? Step down from the fiery soapbox and be sure to walk your talk. This is a time for speaking your truth, even if it isn’t the popular opinion in the room. We all wish the holidays could bring some peace at last, but if you need help figuring out how to navigate clashing politics, check out Sagittarian Sarah Silverman’s show “I Love You, America.”

Tip: You could declare some spaces (like the festive dinner table) a politics-free zone. But the personal is political, so come prepared to listen and discuss. During Sagittarius season, there’s a chance to create dialogue and step into other people’s shoes. Unity might just be possible after all.