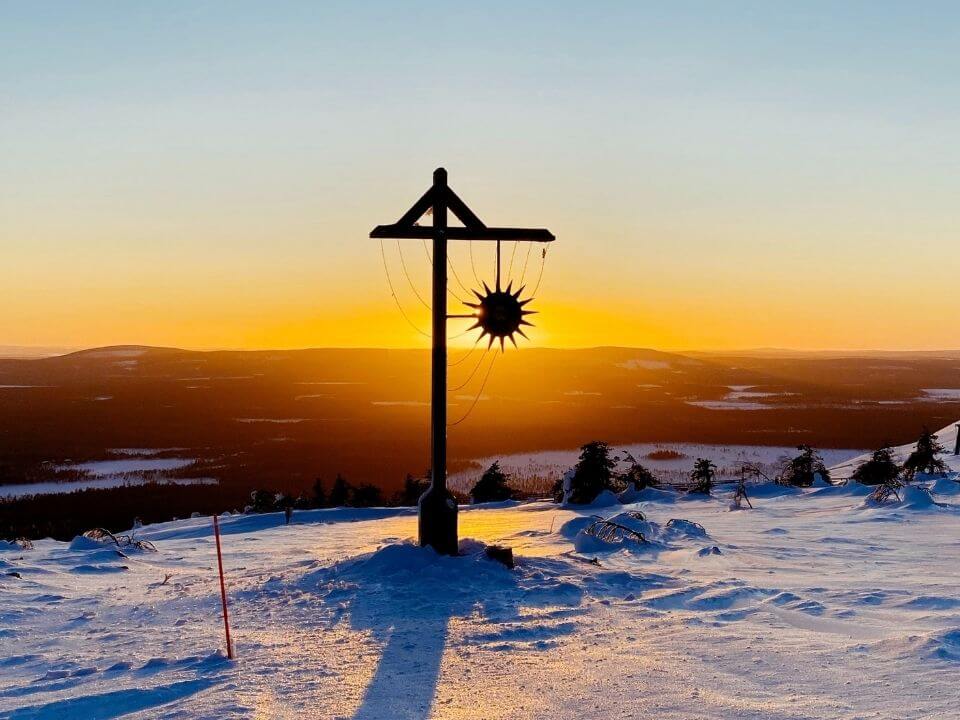 The surprising cosmic history of winter solstice rituals dates back to ancient times, and its roots might just surprise you.

By The AstroTwins and Matthew Swann

December 21 is the start of Capricorn season and the winter solstice on our calendar. And while it’s beginning to feel a lot like Christmas, there are plenty of ways that astrology and spirituality overlap with this powerful date. Solstice rituals date back to pre-Christian pagan festivals, from the Scandinavian Yule to the seven-day Saturnalia festival in Rome to the popular Mithraic Mysteries. Whether ushering away bad spirits, performing fertility rites or having a hedonistic free-for-all, solstice periods have their deepest roots in nature-based spirituality that also honored the planets.

1. Winter solstice is the shortest day of the year in the Northern Hemisphere.

Why is there a solstice to begin with? Because the spinning Earth is tilted on its axis at a 23.5 degree angle (nerdy astronomy explanation here), opposing northern and southern regions of the planet receive more or less daylight as the Earth revolves around the Sun, which, among many benefits and nuisances, gives us our four seasons. In the Northern Hemisphere, regions north of the equator receive less sunlight during the winter solstice, whereas regions south of the equator in the Southern Hemisphere receive more light, signaling summertime.

From our Northern Hemisphere vantage point above the equator during the winter solstice, the Sun has descended to its lowest point in the sky, which corresponds to the Tropic of Capricorn latitude. Once the winter solstice date concludes, the Sun will appear to change direction, climbing each day to its highest latitude point, the Tropic of Cancer, which it will eventually reach during the summer solstice in June.

*In astronomy, the December solstice marks the first day of winter in the Northern Hemisphere. This day has the least amount of sunlight available, so it’s considered the “shortest” day of the year—even though the day has 24 hours, of course, like all others!

Long before Christmas as we know it, a Roman festival known as Saturnalia was the main holiday on the late December calendar.

Celebrated between December 17 and December 23, Saturnalia’s traditions were steeped in drinking, debauchery and public sex. While Saturnalia parties raged in Rome, city courts were closed and the Roman streets abounded with crime, including murder! Named for the god Saturn, this carnal carnival essentially commemorates the dark days of the winter solstice period as the descending Sun moves through the zodiac sign of Capricorn, the sign ruled by the planet Saturn.

For the Sun-worshipping Romans who claimed two major illuminated solar deities, Sol and Mithras, December 25 was chosen as the day to end the Saturnalia festivals since it marked the triumphant day the Sun “reappeared,” resuming its apparent movement on the ecliptic after its three day “standing still” solstice period.

The Roman Mithras was the god of light, the central messenger figure of the Mithraic Mysteries religion (whose origins may extend far back in antiquity to Zoroastrian Persia and Vedic India), while Sol was literally the divine sun. The Romans would eventually worship Sol in the form of an official Roman religion known as “Sol Invictus,” a term fittingly translated as “unconquered Sun,” before it and the Mithraic Mysteries were absorbed by Christianity. Notably, both Sol and Mithras were honored by exchanging gifts, a holiday gift-giving practice later found in our Christmas Day celebrations.

And what of Jesus? Where does he fit in? During the early fourth century CE, the Roman emperor Constantine the Great realized that he could consolidate power and enlarge his empire by practicing Christianity from his new eastern Roman capital, the eponymous city Constantinople (located in what is now Istanbul, Turkey), which rose to become the most powerful city in the world as Rome declined.

The birth of Christ was not celebrated by the Christian church until Constantine made Christianity the official religion of his empire a decade after issuing the Edict of Milan in 313 CE, thus ending the persecution of Christians while creating a new god to worship—Jesus. Roman soldiers would paint the Christian cross symbol on their shields as their new battle standard henceforth as Jesus was made the patron of the Roman army by Constantine. The birth of the Sun god became the birthday of the “Son of God.”

The word “Christmas” didn’t enter the English language until the early 15th century. It’s a shortened form of “Christ’s mass”, or Cristes Maesse, as it was first recorded in 1038. This was followed by the term Cristes-messe in 1131, according to the The Catholic Encyclopedia.

Christmas, like the Christian religion itself, is a syncretic (blended) holiday with many ritual elements taken from both Asian and European pagan traditions. Despite the church’s creation of its own rituals, like the nativity, it wasn’t really until Charles Dickens’ A Christmas Carol was published in 1843, that Christmas was more broadly embraced. By 1870, Christmas was made a legal holiday in all U.S. states.

It’s not exactly the wholesome, family-friendly holiday that’s become our modern Christmas season. But these are indeed its historical roots!

3. In some traditions, winter solstice was also a time to commemorate and commune with the dead.

The dark days of the winter solstice are long associated with the spirits of the deceased. In many pagan and nature-based traditions like Yule, the winter solstice is a time to commune with ancestors, and to ward off evil and negativity from the past year, before the Sun’s anticipated rebirth.

This time of year commemorated life and death, fertility and immortality. Some parts of the holiday may be closer in traits to Halloween than Christmas. Does the Ghost of Christmas Past that visits the miserly Ebenezer Scrooge featured in Dicken’s A Christmas Carol make more sense now? It should—it’s a winter solstice ghost story.

The lore of astrology also supports the association between the solstice periods and specters as the sign of Capricorn the Sea Goat and the winter solstice period are said to be the “gate” for departing souls. (The zodiac sign of Cancer and the summer solstice represent “the gate of arrival” for souls.)

Other winter solstice rituals originate from Scandinavian traditions that honored fertility. Take the Christmas tree: Did you know that evergreens were not originally used to hang festive ornaments and hide presents? They symbolized everlasting life and were displayed as spiritual protection. The Druids believed that mistletoe had magical properties too; its white berries (and kissing under it!) were meant to promote fertility.

The oak Yule log is a descendent of the large bonfires that European pagans would light during the winter solstice period, which they symbolically burned as a means of preserving the life-giving light of the Sun as it passed through the dark days of the winter solstice.

The Yule log was a phallic torch of sorts, set ablaze to promote virility while bringing healing, strength and wisdom to a community. An ancient Yule log song (of unknown origin) goes:

4. In astrology, the winter solstice kicks off Capricorn season.

The resolution revolution officially gets underway as the Sun swings into Capricorn. Holidays aside, this is the most auspicious time of the year for goal-setting. Don’t let anyone give you the “too soon” side-eye if you start obsessing about all the amazing things you want to accomplish in the new year! Get in tune with your feelings and buried desires, so you can architect your dreams in the most fulfilling way. Why not add a little more soul(stice) power to your goals, right?

Depends. There are two definitions of winter, according to The Old Farmer’s Almanac:

6. You can have your own winter solstice celebration. Try one with astrological and global twist.

“December holidays around the world focus on the spiritual symbolism of light,” says Dr. Gabrielle Francis, The Herban Alchemist. “Modern society has replaced much of the spiritual significance of the holidays with materialism.”

Stonehenge in England, known for its precise alignment to the sun’s travels, is a site for winter solstice revelry, where pagans from all over the world gather to see the Sun’s “birth.” A lottery in Ireland gives a handful of people access to the Newgrange monument, a 5,000-year-old burial mound built with a long chamber that’s aligned with the Sun’s first rays at the winter solstice.

We love this post from Dr. Francis about the many traditions celebrated around the world, meant to inspire you to enjoy the holidays with intention and appreciation. “With intention we can create personal rituals that are meaningful to us. Rituals are opportunities to ground spirituality into our daily life. They are small acts of mindfulness that enrich everything we do.”

To infuse your winter solstice celebration with a touch of astrology, we recommend doing something with fire to honor the Sun, from lighting a bonfire to burning aYule log to baking a traditional recipe. A hot drink like a Yule wassail dates back to old fertility rites (and is a precursor to Christmas caroling), when a mix of wine and hot cider were poured on the ground to encourage crops to grow.

You could also honor the Earth itself, since Capricorn is an earth sign, and this is a nod to the nature-based roots of winter solstice. Bundle up for a hike in the woods then create a tablescape from items found in nature.

Pine cones have special winter solstice symbolism. From being worn as fertility charms or burned in the numerous ancient subterranean Roman temples known as Mithraea, where followers of the Mithraic Mysteries were thought to consume the psychoactive drink known as soma, to their deep connection to sacred geometry. Some occultists believe the pine cone is a symbol of the pineal gland and the third eye—the portal to spiritual dimensions.

This winter solstice and Christmas season, give a festive treatment to your wreaths and tree by adding beautiful pine cones.