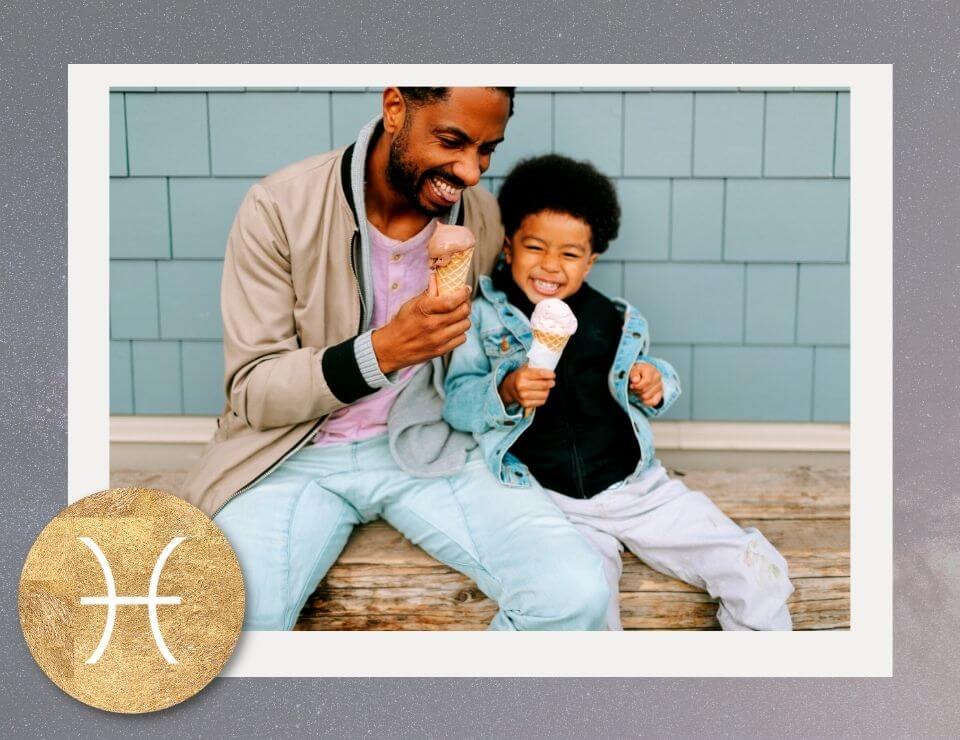 What kind of parent is Pisces?

Pisces moms and dads are among the most nurturing.

The Pisces parent has a heart of gold, and you’re the ultimate empath. You naturally gravitate to children and you shower your kids with the unconditional love they crave. In your eyes, they can do no wrong, and you’re there to soothe them, spoil them and cheer on their every accomplishment. Some Pisces parents  elevate their kids onto quite a pedestal, and you cherish every moment that you spend with them. Your children will definitely grow up with a healthy sense of self-worth as a result of your adoration (in some cases, a little too healthy, but so be it).

While Pisces parents can occasionally pull the “helpless victim” card, when it comes to your children, you’re tough as nails. Nobody messes with the ones you love! You’re as protective as they come, and you’ll defend your clan ’til the end. Sure, it might be a little overboard, but that won’t stop you. Pisces Chris Martin didn’t “break up with” ex Gwyneth Paltrow, they “consciously uncoupled,” bringing relationship writer Katherine Woodward’s now-ubiquitous term into the zeitgeist. And he remained a steady co-parent in the lives of children Apple and Moses. Your kids always know that you have their backs, and there’s no sacrifice you wouldn’t make for their happiness.

Creativity is a natural Pisces zodiac trait—and this parent’s got it.

Pisces is ruled by dreamy, poetic Neptune. You’ve got the soul of an artist, and a flair for music, decorating, food, fashion (especially shoes) and all the sensual delights. And maybe your kids’ names tattooed on your body, like quirkily adorable Pisces mama Drew Barrymore.

our kids will grow up versed in many genres, and they’ll definitely taste the finer things that life has to offer. More than anything, you want to expose your kids to culture, and you’ll encourage them to develop their own talents and expression.

Parent-child outings will include gallery strolls, trips to the museum, arts and crafts days, the Nutcracker ballet at Christmastime. Dancing is especially fun for Pisces parents, so when things get hectic at home, just crank up the stereo and leap around together.

ou’re especially sensitive to aesthetics and presentation, something you’ll pass along to your children. Gift-wrapping, handwritten cards and old-fashioned tasteful touches really make a difference, especially in this day and age. You’ll teach your children not to judge a book by its cover—but to give it a gorgeous wrapper just the same.

Traits of an Pisces mom or dad

The Pisces parent can be manipulative.

You’re a super-sensitive sign, but when your own feelings get hurt, you can fall into the “tender trap.” Rather than communicate directly, Pisces parents can become passive-aggressive or emotionally manipulative.

Guilt is the ultimate Pisces parent’s weapon, one you may need to use a lot more sparingly. “I’m fine,” you’ll insist, when it’s obvious to your entire family that you’re not. Although you’re just nursing a bruised ego, this withholding has a detrimental effect. You’re showing a disconnect between your words and reality, which could lead your children not to trust their own feelings—or you. They may begin to act out in an effort to test your authority as a result, and to get a clear read on how you really feel.

As a parent, you’ll need to work harder to be transparent, since children have well-developed B.S. detectors. If they sense that you’re giving them a guilt trip or subtly punishing them, it will only drive them away. Want to keep their love AND earn their respect? Say what you mean, and mean what you say.

The kookiness of the Pisces parent can raise eyebrows.

There’s a thin line between creative and crazypants, and admit it: there are moments when you cross it. Pisces is ruled by bohemian Neptune, and you’re naturally drawn to all things alternative and underground. That may be fine for you, but if you show up at your kids’ school concert in an avant-garde piece that looks like you stole it from the Met Costume Institute, don’t be surprised if they pretend not to know you.

Beyond that, you may blur the boundaries and let your kids be a little too privy to your personal life. When you get on a gossipy roll or one of your tirades, you forget to self-censor, and those little ears might not be the best audience for some of your mature subject matter. While it’s fine to let your kids see you cry (there’s no avoiding it—you weep at the drop of a hat), they should never be pressed into the role of de facto therapists. Pisces can fall into the “victim” mentality, so be mindful not to do that around your kids. You want to model personal responsibility, not teach them to blame and point fingers.