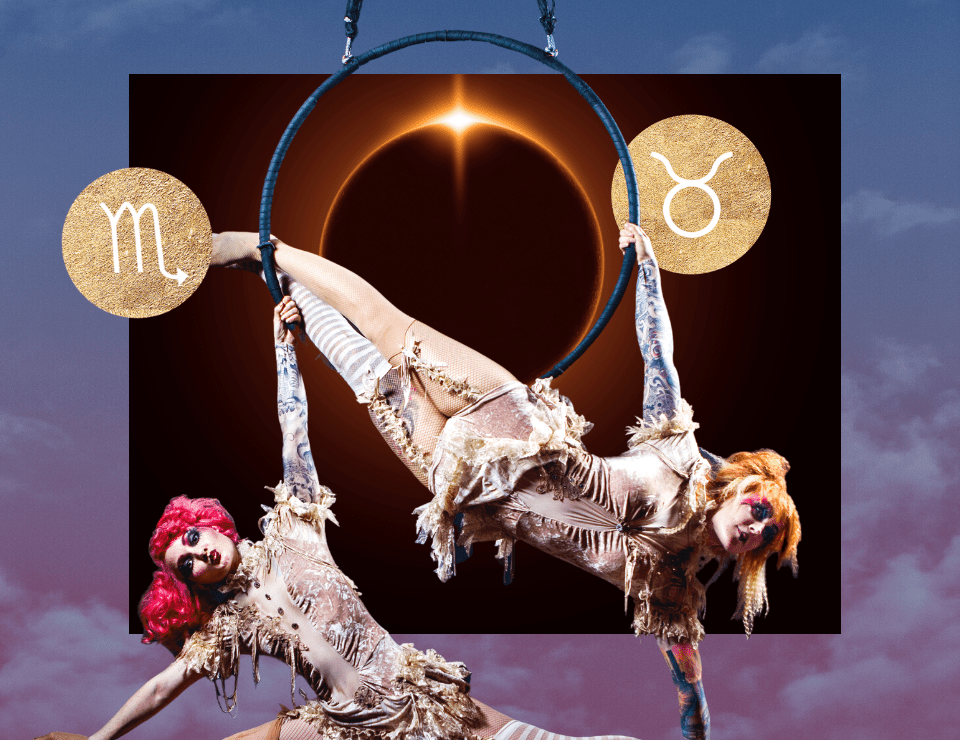 Eclipse season 2022, the fall edition, lasts from October 25 to November 8 and includes a partial solar eclipse in Scorpio and a total lunar blood moon eclipse in Taurus.

What do the Scorpio solar eclipse and Taurus lunar eclipse have in store for your zodiac sign? And what do they reveal about what’s happening in the world right now?

What does the fall 2022 Eclipse season mean for the world?

First, what are eclipses?

Eclipses always arrive in pairs—and land in exact opposite signs in the zodiac, in this case, Scorpio and Taurus. Power struggles can be explosive (and fascinating) under these eclipses! Nefarious details may come to light, exposing hidden agendas, crimes and scandalous underground activity. (Where are those missing boxes?)

Picking up the pieces could take a while, but with no-nonsense fixed sign energy (Taurus and Scorpio) helming the operative, these eclipses force us to deal with the facts and devise solutions that may require rebuilding from ground zero.

What is the date of the 2022 Scorpio solar eclipse?

The first eclipse, on October 25, is in Scorpio, the sign that rules reproduction. This solar eclipse also lands in close connection to Venus, the “divine feminine” planet in astrology.

What is the date of the 2022 Taurus lunar eclipse?

The second eclipse arrives on November 8, Midterm Election Day in the United States. This total lunar blood moon eclipse in Taurus is quite significant, especially since it lands in close connection to chaotic, revolutionary Uranus.

What will happen during eclipse season 2022’s fall moons?

As reproductive rights hang in the balance for U.S. women, the outcome of this election will be critical to our future—and is likely to rile up a cauldron of intense emotions.

We may witness progressives turn out at the polls, but is there potential for another January 6 United States Capitol Attack/insurrection-style event? Let’s certainly hope not. But with the moon in this precarious position, our nerves will be on high alert.

Meanwhile, Iran is seeing the first ever beginnings of a revolution ignited by women in that country—and these eclipses may add more fuel to their fires. As they risk injury and death in public protests, women are lambasting strict laws that require them to wear hijab (head covering).

What does the solar eclipse in Scorpio mean?

So eclipse season 2022 kicks off on Tuesday, October 25, at 6:49 AM EDT, with the Scorpio solar eclipse. Solar eclipses always occur during new moons (lunar eclipses during full moons.)

Look in a new direction during a solar eclipse, because that’s where opportunity lies. This can feel scary, since letting go of control will be necessary. These momentous new moons push us off the starting block and into new waters. But we have to move fast, since just like an eclipse, the manifestation period is both rare and brief.

Scorpio solar eclipse: What to expect

Scorpio is the sign of transformation—and with an eclipse in the picture, you may have to make a quick and difficult choice in the name of your growth. The challenge? Face your fears and do what is right for your future.

Expect an intense range of feelings to arise, from fear to regret to what Brené Brown calls “foreboding joy.” (Yes, it can be scary for humans to get vulnerably happy!) This is the time to acknowledge whatever you’ve buried in your psyche—even if you’d rather tuck it away.

Is your intuition telling you that something’s “off?” Play detective. As the cosmic veil drops, you could uncover power struggles, shocking scandals and sudden transitions. (WTH!) Relationships could go through twists and turns. Investment opportunities may appear unexpectedly, or someone may reach out with an offer to fund your work.

On a purely positive note, this eclipse can bring a legendary burst of creative genius.

Scorpio is the famous sex sign of the zodiac, so get ready! This eclipse could bring some spice cuffing season developments. Strong sexual chemistry could literally ignite a mind-body-soul connection. No judgments from us—or the Scorpio solar eclipse—if you hop into bed (the bathroom or a dark little nook) within moments of meeting someone you’re certain that you know from a past life.

For couples, October 25 could bring fast-moving developments, some of which might be jarring or exciting (or both)! The 12-Step saying “you’re only as sick as your secrets” applies to relationships, too. If you’ve been hiding information or holding back from your partner, you may be unconsciously poisoning the well of trust.

Challenge yourself to be transparent and have a heart to heart. Caveat: Choose right time and place for this—when you’re both relaxed and open, not five minutes before your boo is stepping into a meeting that their job is riding on!

Shared finances, passive income and property matters come under the microscope, too, especially since this solar eclipse lands next to value-driven Venus. How can you pool funds for greater wealth? If you’ve been spending indiscriminately, start tucking more away for the future. Have a portion of your paycheck automatically streamed into your 401K (or SEP IRA if you’re self-employed). Search for investments with compounding interest.

What does the lunar eclipse in Taurus mean?

Eclipse season 2022 ends with the Taurus lunar eclipse is on Tuesday, November 8, at 6:02 AM ET at the Taurus full blood moon. Expect shakeups.

Lunar eclipses always happen during full moons. Seeing red? Lunar eclipses transpire when the full moon opposes the Sun at the same degree of zodiac sign on the ecliptic. With the Earth sandwiched between these heavenly bodies, el Sol casts a shadow that slowly bleeds across the surface of the moon. (In fact, due to its reddish tint, a total lunar eclipse has earned the nickname of “blood moon.”) Lunar eclipses are prime time for doing shadow work and dealing with feelings we’ve ignored.

Situations could pivot abruptly or come to a sudden, unceremonious halt. If anything in your life is “eclipsed away,” here’s our advise: Stop chasing and give it some space. You’ll either manifest a better option or circle back to this later—after you’ve processed the lesson and evolved!

Taurus lunar eclipse: What to expect

Sense and sensuality? Yes, the twain can meet, and lunar eclipse in Taurus is here to prove it!

Eclipses reveal shadows, beaming on the hidden aspects of life that we’d rather not deal with. These shakeups can be as shocking as a tsunami. No, you don’t have to hide out in a bunker, but do keep your wits about you. The more grounded and stable you can be near November 8, the better.

Out of the blue, you may have to shift into practical, resourceful mode in order to resolve whatever curveball this Taurus lunar eclipse sends your way. Whether a minor tremor or a seismic shift, whatever changes arise were overdue. No more ignoring what must be done!

Bring on the TLC, affectionate gestures and long, lingering hugs (and then some) during eclipse season 2022. Love doesn’t have to come in like a wrecking ball, then race off like a runaway train. But if that’s your story, pull into the station and check your GPS before you derail.

Brace yourself: Since this full moon is also a total lunar eclipse, you might be hit with some surprising information. Like maybe that nice person is actually a manipulative tool—and the one you pegged as a player is marriage material. Misaligned values could be cause for a breakup, or some heavy-duty couples therapy.

But then again, perhaps your love interest is more stable than you gave them credit for. (And, glug, maybe you were the secret commitmentphobe of the two of you?) Bottom line: When you slow down and get back to brass tacks, you may discover inconsistencies that need to be dealt with. But that’s where pragmatic Taurus shines. Sort it out with logic and lots of touch, if the love isn’t lost.