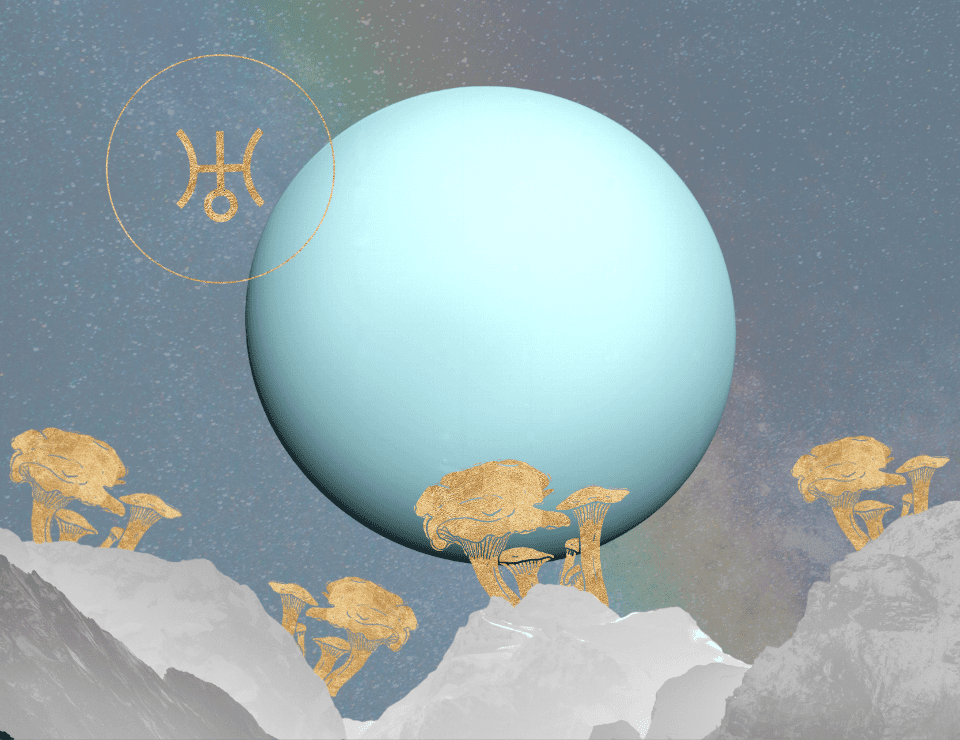 Eureka! Uranus governs the zodiac sign Aquarius, under which Thomas Edison, inventor of the light bulb, was born. In astrology, radical and metaphysical Uranus is the planet that rules our higher minds.

What Uranus means in astrology

Uranus can’t be seen without a telescope, and so we didn’t know of its existence until 1781. Thus, Uranus is part of the modern astrological system. Fittingly, this planet (as well Neptune and Pluto) are associated with the unseen aspects of life. Uranus’ domain is akin to that of future-forward Aquarius, the star sign that rules scientific inventions, electricity, innovation and technology. These are all things that require us to stretch beyond our vision and lean in to belief. For example, we might not be able to prove the Uranian, but we feel a certainty about its existence. Even the Internet—which is Uranus’ domain—is a form of virtual reality, if you think about it.

In mythology, Uranus is known as Father Sky who bore children with Gaia or Gaea, aka Mother Earth. This is the planet that rules outer space and aeronautics and shows where we want to fly free—without restriction! (Gravity…what’s that?!)  Given these liberated vibes, it’s no surprise that parenting did not come naturally to the Uranus of lore. Legend has it that Father Sky was cruel to his children, burying some in the earth and banishing others. Saturn, one of his sons, even castrated Uranus out of revenge.

Uranus shows where we’ll fly our freak flags and insist on doing things in our own unique ways.

To find out your Uranus sign, run a free chart here: www.astrostyle.com/birthchart

As an icy gas giant, Uranus is the coldest planet in the solar system. Astrologically, its effect can be equally chilly and dispassionate, preferring rational thought over raw emotion—yes, even when grappling with all the metaphysical subject matter it rules: astrology, yoga and kundalini energy (the “body electric”).

Science may reign over spirit where Uranus is concerned; or at least be incorporated into its systems. Think about astrology—a topic that is mystical but also trackable with data and math! Anyone can learn this star-powered divination tool, even if no one can clearly explain WHY it works. Kundalini yoga and tantra are examples of Uranus’ high-minded sexiness, teaching us how to use the electricity (or life force energy) in our bodies to have more soulful sensual exchanges.

What does it mean to be born with Uranus in your chart?

The placement of this “mad scientist” planet in the natal chart shows where we are prone to eccentricity and groundbreaking thought. A weirdo among its solar system cohort, Uranus rotates on its axis in a retrograde motion. It shows where we’ll fly our freak flags and insist on doing things in our own unique ways.

Radical developments happen when Uranus is in town, for better or for worse. While Uranus was in Aries, the sign of the dominating warrior, Hitler and ISIS came to power. Scary stuff! While in its home sign of tech-savvy Aquarius, smartphones became the ubiquitous device and Internet speeds became exponentially faster, allowing us to connect to our fellow humans across physical barriers, but in real time. The collective consciousness is also ruled by this communal planet, so its transits can affect the global mindset.

There’s a bohemian aspect to Uranus, the planet of platonic love. At best, Uranus can help us feel that sense of universal connection. It can awaken the humanitarian spirit, reminding us that sharing resources is the way to thrive collectively. Festivals like Burning Man, that abide by a “gift economy” and the modern-day collective systems like ride-shares, crowdfunding apps. communal living, co-working spaces and companies like ZipCar and TaskRabbit have “Uranus” written all over them.

Utopia is possible, as far as Uranus is concerned. But we all have to simmer down a little, think clearly and realize that in the end, it’s just all peace and love.

What does Uranus represent in a birth chart

Rebel, rebel! Side-spinning Uranus is the planet of liberation. The zodiac sign and house it’s orbiting through at your birth reveals where you cannot and WILL not be fenced in. Here’s where your genius side comes out to play without reservation. You’re more experimental, spontaneous and untethered in this part of life—and you will write your own rules.

Since Uranus is associated with activism and humanitarian work, the house it falls in can give clues about your social impact and what cause will rev up your fighting spirit in this lifetime. Chaos alert! You may find that this area of life is constantly in flux—and that you like it like that. The rest of the world might have another opinion, however. At some point you may have to do more “adulting” here so your rebel ways don’t encroach on other people’s freedom.

Whatever zodiac sign and house Uranus was orbiting through at your time of birth determines your “natal Uranus” or “Uranus sign.” More specifically, this will guide you in the following ways:

Uranus is one of the outer planets, housed between Jupiter and Pluto. Because of its distance from the Sun, it has a huge orbit to make. Uranus takes 84 years to circle el Sol, spending an average of seven years in each one of the zodiac signs. Since Uranus governs society and collective consciousness, its transits shape mass culture. Every Uranus cycle influences a generation, directing political issues, activism and pop culture trends that unite people of a particular seven-year age group.

How do you know your Uranus?

Use our cosmic calculator to discover what zodiac sign and house Uranus was in when you were born. To accurately determine the house, you will need to know your birth time.

What if the zodiac sign and house are different?

This is common! Read both the sign and house description below. Do these interpretations pull you in two different directions? That’s not unusual. We human beings have range. Astrology is an interpretive dance, a tool which provides a fascinating layer of self-discovery. Do some “astro mixology.” Reflect on how you can work with both energies to enhance your life.

What does Uranus govern?

What are the special positions of Uranus?

Uranus turns retrograde for five months of every year, so it’s not unusual to be born with this planet in reverse. You may have to work harder to muscle through its lessons, but once you nail this planet’s energy, your additional effort may actually lead to a rock-solid mastery of working with Uranus in your life.

The planet’s home base, an easy flow if placed here in the chart

Opposite sign of home base, may need to work harder to integrate the planet’s energy if placed here in the chart

The planet’s most powerful position; indicates ease and added fortune with using the planet’s energy if placed here in the chart

Opposite sign to the exalted position, can indicate struggles with utilizing the planet’s energy if placed here in the chart

What does Uranus represent in the houses?

The meaning of the placement of Uranus in a birth chart, for each of the 12 houses