New & Full Moon Rituals: How To Create Your Own 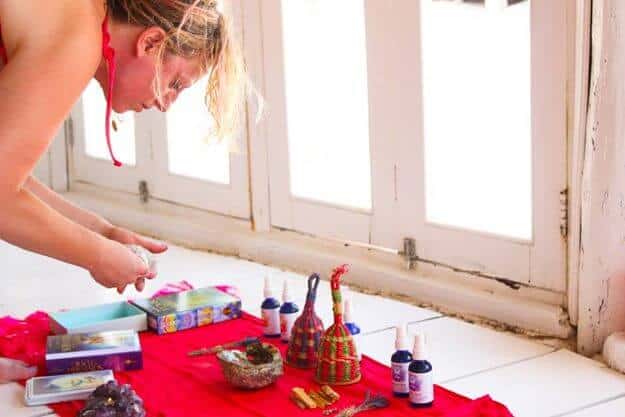 Tired of swimming upstream? As astrologers, we’ve learned that living by the natural cycles and rhythms of the universe—or planning it by the planets—can really keep you in an abundant flow. Setting intentions at new and full moons has become a regular practice for us and many of our friends, and we wanted to share that with you. We teamed up with Dina Manzo, our good friend, moon manifesting sister and star of the Real Housewives of New Jersey, to give you a few ideas.

The gist of new and full moons? New moons represent fresh starts and beginnings, while full moons mark turning points, manifestations or closure. So it’s best to initiate a project or plant those seeds at a new moon, and “harvest” or make decisions at the full moon

While it might sound woo-woo, it’s not really that “out there,” if you think about it. Our ancestors planted, hunted, fished and moved by the seasons and cycles of the moon. And they survived long enough to bring us into the industrial and then the digital ages. But in our tech-driven society, it’s so easy to fall out of nature’s rhythms. So here’s how you can tune back in:

How to Create a New/Full Moon Gathering

1. Where to do it? Let the energy guide you.

For the past year and a half, we’ve gotten together with Dina and assorted friends to do various rituals for each new and full moon. How we end up celebrating the moon is always a spontaneous surprise! One Pisces new moon, we found ourselves in the Nevada desert, building a fire at a dry lake bed an hour or so from Vegas. In the Hamptons for the Cancer new moon, we collected shells and even found a washed-ashore crab leg! Another time, we got crafty and included Ophi’s daughter Cybele, decorating God Boxes that would hold our wishes.

Rally your soul-seeking and self-aware friends—and invite that person who might not be as far along their spiritual path, too. (Out in the desert, the driver who chartered us spontaneously joined our fireside circle and made the most heart-melting wish, bringing tears to our eyes). Remember, this is not an exlusionary thing, so share the love! It’s great to take turns hosting if you have a regular moon crew, or to come together and each add something to the plans.

This should be a comfortable, joyful experience—a time to feel good. You’ll definitely want pens and paper for guests to write down their intentions or what they’re releasing. Other things you might keep on hand could be:

• Matches or candles to burn something you’re letting go of
• Crystals, rocks, shells or other natural artifacts—you might even want to tuck your wishes under/into one of these
• Sage wands (also called smudge sticks), oils or Palo Santo wood to burn and “clear” the energy
• Divination decks like Tarot, goddess cards or angel cards
• A beautiful cloth for setting up a group altar
• Photos of loved ones or cherished objects that can sit on the altar with your wishes for a “moon bath”

Again, you can let the spirit of the moon move you, but we’ve found it works to play soft music, serve invigorating food, light candles or a fire, and to create an ambience that helps people tune in and be more present. You might sit on floor cushions or go around in a circle and each speak on what you’d like to release/manifest (at the full moon) or begin anew (at the new moon). When weather permits, an outdoor ceremony is great so you can feel tuned into nature—and hopefully even see the full moon! After everyone has made their wishes/written down intentions, it’s great to “break” any heaviness with music or movement. Invite the energy to lead. A new moon circle could inspire a walk, angel card readings or a fun outing. Your full moon gathering could turn into a dance party, a drum circle, a spontaneous swim or who knows what!

Some people say you should sleep with your moon wishes under your pillow. We’ve done it! We like to put them somewhere special, like an altar. Tali is especially into creating altars with pretty crystals and found objects—her own brand of spiritual home decor. We’re inspired by beautiful store windows and displays all the time (hello, Anthropologie and Bergdorf Goodman).

How to Set Intentions or Make Moon Wishes

It’s not required, but putting intentions into writing can take them much further. One study even showed that people who wrote down their goals, shared them with others, and maintained accountability for their goals were 33% more likely to achieve them, versus those who just formulated goals. Which brings us to…

Let’s face it, our memories can lapse. Having other people hold the space (or hold you accountable) for the intentions you set at each moon can add extra power. If sharing is too personal, you can get a deck of angel cards and have each person draw one, then perhaps share a little something about what the message inspires.

3. Think in two-week and six-month cycles.

There is one new moon each month, followed by a full moon two weeks later. While they aren’t in similar zodiac signs, the energy from the new moon actually builds up over that two week period. The cycle basically goes like this:

New moon—set the intention & get to work.
The new moon gives way to that first sliver of light as the shadow moves and the moon reveals herself—or “waxes,” as it’s called.

Reap results or make decisions at the full moon.
Two weeks later, we have the complete illumination of the full moon, which can reveal what was in the dark. Your next moves will show themselves now.

Each new moon also has a six-month astrological cycle—for example, the March new moon in Pisces always links to the September full moon in Pisces. The December/January Capricorn new moon comes full circle with a late June/July Capricorn full moon. So you can set specific intentions at a new moon, based on the energies of that zodiac sign, and watch them unfold in the coming half-year. (For lots more on moon cycles, including powerful quarter moons and eclipses, read our post here.)

Ask & It Is Given by Esther and Jerry Hicks

The Power of Intention by Dr. Wayne Dyer