Check your rearview mirror, Taurus. Can you see your comfort zone fading to a distant blur? 2020 could bring unprecedented growth and freedom…if you can get more comfortable taking risks.

Keep a bag packed, Bull. With Uranus twerking through your sign until April 26, 2026, the reinvention tour wages on in Taurus, shaping your 2020 horoscope.

And with a trio of planets—Jupiter, Saturn and Pluto—journeying through Capricorn and your nomadic ninth house in 2020, “citizen of the world” could become your new handle.

Ever since radical Uranus shifted into your sign on May 15, 2018, you’ve been propelled into uncharted terrain. On many days, the floor beneath your loafers feels more like quicksand than reclaimed wood. Even wilder? In order to ground yourself, you’ve had to stay in perpetual motion…at times, with no clear idea of your actual destination!

For a fixed earth sign, this irregular rhythm can feel mind-boggling, to say the least. You’re the pillar amongst your peeps, the dependable rock. But try as you might to uphold traditions, your old way of life is steadily slipping away. The pressure to evolve may feel downright Darwinian at times—adapt or become a dinosaur.

Fortunately, you are the tenacious toro, as capable as metamorphosing as the rest of us. But you’d better start adding spontaneity into your steadfast equation in 2020. Then, fasten your seatbelt and get ready for a wild and exhilarating ride! 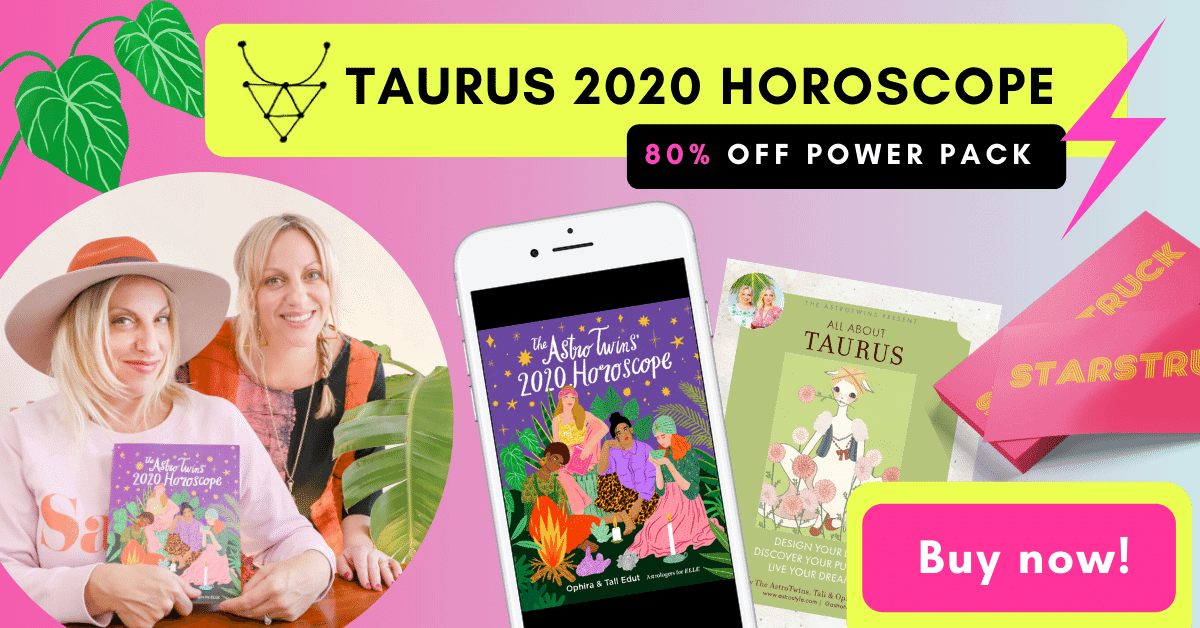 Bottom line: 2020 could bring freedom and adventure—but you’ll have to let go of what you “know.” Get our 2020 Horoscope book, bundled in a special Taurus 2020 Power Pack with 3 bonus gifts to keep you aligned all year. Get your future now >

With your enthusiastic and expansive ninth house #lit, 2020’s planets help you face your changing circumstances with a rare sense of enthusiasm…and, dare we say, joie de vivre. That might also mean scrapping your meticulous ten-year plan or cashing in on an investment before it’s reached full maturity.

Should you find yourself suspended between two worlds, do not panic. With horizon-broadening Jupiter in Capricorn and your open-minded ninth house until December 19, you’ll be shocked by your own versatility. This is the year to be a student of life, opening your mind to discoveries. Since Jupiter is the galactic gambler, your play-it-safe nature won’t hold you back when it’s time to leap. Risky moves you would never have considered in the past might seem sane and logical in 2020. Both Jupiter and Uranus have a teenage quality to them, and in 2020, you could feel as fearless (and frisky) as a 15-year-old!

Simultaneously, structure-obsessed Saturn and control-freak Pluto will travel alongside Jupiter in Capricorn, providing some semblance of a safety net. These powerhouse planets have been settled in Capricorn’s realm for a while—Saturn since December 19, 2017, and Pluto since November 27, 2008. Fear not, Taurus, you haven’t lost all touch with your common sense. Even if you do have moments where you just want to escape off the grid, status-conscious Saturn and Pluto won’t let you give up all worldly possessions to follow a guru across the globe. (A three-month stint in an ashram, however, is not out of the question in 2020.)

It doesn’t hurt that career-focused Saturn is heading to the top of your chart, activating your professional “true north.” From March 21 to July 1, the ambitious planet darts into Aquarius and your tenth house for a quick warm-up before retreating into Capricorn and taking a final lap. This three-and-a-half month preview will get you thinking seriously about the direction of your future. And (huzzah!), since Saturn is naturally at home in the tenth house, this short spell will re-energize your planning powers, giving you one of the best windows of 2020 for getting a profitable mission off the ground.

When Saturn finally drops anchor in Aquarius from December 17, 2020, until March 7, 2023, you’ll be ready to embrace the mantle of leadership once again. But will you play the role of the executive superstar, Taurus, or would signing your own paychecks be your cup of oolong? (Or maybe a mix of both?) As entrepreneurial Jupiter rises to Aquarius and joins Saturn in your tenth house this December 19, you may feel pulled in both directions.

Two days later, on the winter solstice, there will be an ultra-rare and exact alignment of Jupiter and Saturn at 0º Aquarius. This meetup, which only happens every 20 years, is called The Great Conjunction. Given that it’s taking place in the most ambitious zone of your solar chart, you could make yet another “shocking” move near December 21, kicking off your Havaianas and stepping into a pair of power pumps. If you felt adrift with your career earlier in 2020, don’t freak out.

The Great Conjunction will help you harmonize the polarities of Jupiter’s free-spiritedness and Saturn’s demands for structure. In the meantime, your exploratory missions are the best possible form of research you can do this year. It’s not often that your routine-driven sign is this liberated from the proverbial box. In 2020, trust that all your meandering has the potential to guide you into a fulfilling future. The more “purposefully uncomfortable” you can make yourself, the stronger and wiser you’ll feel when the ball drops on 2021.

Your ruler, value-driven Venus, will also keep the coffers full in 2020, along with a new series of eclipses which falls on your financial axis. From April 3 to August 7, Venus shakes her moneymaker in Gemini and your second house of daily bread. Due to a retrograde from May 13 to June 25, Venus spends four times longer than average in this zone of your chart.

The boost probably won’t be enough to afford you a private island, but it will keep steady cash flowing in, which is music to your security-loving ears. (Especially while Jupiter and Uranus make you feel like a space cadet and interdimensional traveler for most of 2020.) Think outside the nine-to-five box, Bull. Two eclipses will jangle your eighth house of big money on June 5 and December 14. It could bring you a fruitful sale of property, a deal that pays you in royalties, or a chance to be a ground floor investor in a savvy startup.

Ready to blaze the trail written in your 2020 stars, Taurus? Get the full forecast instantly in our Taurus 2020 Power Pack — and 3 bonus gifts! >

Since Venus is the ruler of love, she’ll institute a firm “no romance without finance” policy this year. Single Bulls will have little tolerance for a Tinder date who doesn’t reach for their wallet when the check comes (as an act of generosity as opposed to archaic gender roles). And if they have no plans for building a stable future, it’s an instant “bye!” Between April and August, coupled Taureans could come into cash as a result of your S.O.’s good fortune, through their income, an inheritance or a mix of both. Serious talks about spending, saving and investing must be had in 2020. Fortunately, Venus is the cosmic diplomat, which makes it easier to discuss the “taboo” topic of money.

And should all the fast-moving energy of 2020 necessitate a major life change, courageous Mars has your back. The warrior planet will hold an extended pose in Aries and your twelfth house of healing, transitions and endings from June 27, 2020, to January 6, 2021. During the retrograde phase, which lasts from September 9 to November 13, you may need a time-out to grieve a transition. What’s a fantasy and what’s an illusion? You could spend time grappling with this question in the fall. Want to pen a poetic farewell? You’ll be a regular Rumi in the second half of 2020. Just be careful not to let guilt overtake you! Mars in Aries hastens your departure. When it’s time to move on, you simply must, Bull, or else you’ll stagnate. Instead of thinking of this as the end, how about, “until we meet again?”

Want to activate the luck encoded in your 2020 stars, Taurus? Don’t miss your chance! Get your full map NOW in our Taurus 2020 Power Pack > 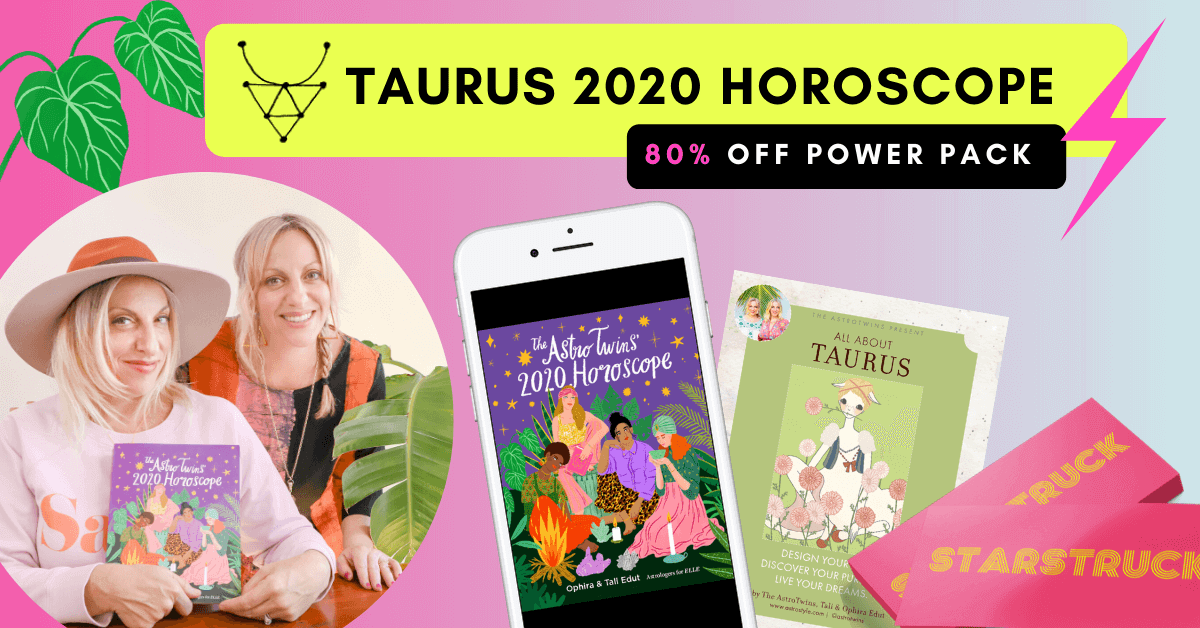