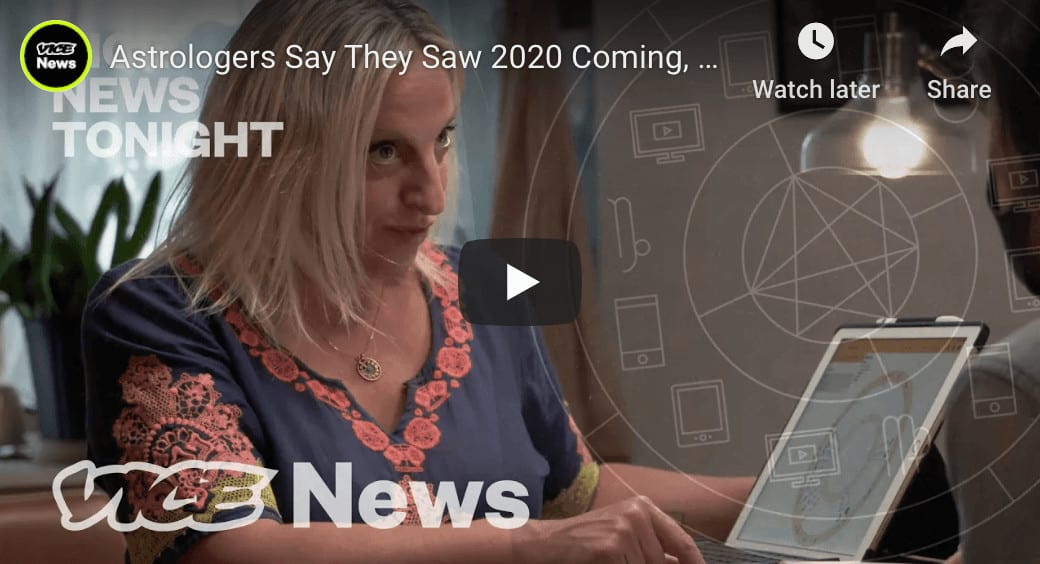 In August 2020, VICE News paid a (masked) visit to Astrostyle’s New York City headquarters to ask us if we saw 2020 and the coronavirus coming, and what the stars had in store for a Covid vaccine and the rest of the year.

Reporter Meena Duerson also asked Ophi the 2020 election horoscope and to cosmically explain all the pandemic pandemonium of the year.

In straight-talking Sagittarius style, Ophi accurately predicted to the day that December 20, 2020, would the vaccine’s initial date of availability—in a segment filmed four months before Moderna released its vaccine. Then, she capped it off with an f-bomb heard ’round the world. (Watch the NSFW short clip below!)

Among Ophi’s bold predictions were that the election could be a chaotic mess (#truth) riddled by Mercury retrograde’s foiling of communication and technology. Mercury ended its signal-scrambling backspin on November 3, the same day as the U.S. Election. Yet, the results continues to be dogged by accusations of voter fraud, despite incontrovertible evidence (and rulings) to the contrary.

So why did we pick December 20 as the date for the COVID-19 vaccine to be released? In addition to a host of astrological factors, the much-touted Great Conjunction of Jupiter and Saturn was set to arrive that day. These two planets aligned in Aquarius, the sign that rules science and innovation, which includes pharmaceutical technology.

Watch the full clip on Vice News below:

We also traced prior pandemics in history using mundane astrology, seeing how 2020’s three Jupiter-Pluto conjunctions in Capricorn paralleled the same trio of Capricorn squares that last occurred in 1771, coinciding with three waves of the Russian Plague.

In addition, our coverage of the January 12, 2020, Saturn-Pluto conjunction (written in summer 2019 and published in our yearly astrology book) prophesied a “black swan” economic crisis, forecast in partnership with Astrostyle’s resident astrologer Matthew Swann. We’ve since made predictions about Bitcoin, the global economy and the brewing “American Revolution 2.0” that’s unfolding between now and 2022.