Royal Family Astrology: 5 Fall Forecasts for Harry and Meghan, Will and Kate

Find out what’s in the stars going into 2020 for Harry and Meghan, Baby Archie, Kate and William and the princes’ brotherhood, according to their horoscopes and zodiac signs. Plus: The surprising traits that Princess Diana and Meghan Markle’s birth charts have in common.

When PeopleTV called and asked us to talk horoscopes  for the British royal family, we were a resounding yes! (And not just because Ophi got to canoodle the on-set corgi, Meatball—a fluffy Cancerian!) Family dynamics have always fascinated us (we’re twins, after all) and we love to peek under the cosmic hood to see what’s really at play. Astrology is such an amazing tool to help people navigate uncertainty—no doubt why Princess Diana was a fan who consulted her own personal astrologer. So here’s how the stars advise the royals to move smoothly into 2020, as told to Rachel Carpenter of the Royal Report.

1. Will Harry and Meghan be okay? (Short answer: Yes…but it will take some work.)

The 2019 ABC documentary Harry and Meghan: An African Journey, the young royal couple opened up about their recent struggles living in the spotlight, especially with the paparazzi. Meghan, a Leo with a Cancer rising and Libra moon; and Harry, a Virgo with a Capricorn rising and Taurus moon (all earth signs!), have very different charts that can create both magical and challenging dynamics.

As a Leo, Meghan will feel everything palpably, and will express her sentiments outwardly through intense emotions (as a Cancer ascendant, she will wear her heart on her sleeve). Harry’s ascendant is in the opposite sign of Capricorn, which makes him more stoic and heroic. Couple that with his helpful Virgo Sun sign and he’ll want to rush to the rescue. While this duo will be fiercely loyal and protective of each other, they can also get caught into a swirl of fear. Since Harry is still haunted by the paparazzi and his mother’s death, his anxieties are playing right into hers, creating a chain of pain.

Our advice: Meghan is going through a transit called the Pluto square (when Pluto in the sky forms a square, or 90-degree angle of tension, to Pluto in one’s chart). This once-in-a-lifetime event, which happens in your mid-30s, can make people suddenly crave more privacy. Meghan’s Pluto square happened to coincide with her life becoming public, right as she was becoming a first-time mother and completely out of her comfort zone. By next year, this will ease up. In the meantime, we recommend this new couple put their energy into a positive and uplifting pursuit. Harry may want to do some healing and possibly even a bit of forgiveness work to recover from the deeper layers of unresolved pain.

WATCH: Ophi gives The Royal Report on PeopleTV, according to astrology 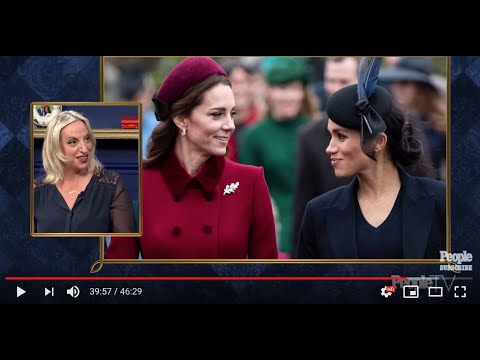 Follow the Royal Report (and see the whole episode) on PeopleTV

2. What do Meghan Markle and Princess Diana’s charts have in common?

Quite a lot, it turns out! Diana was a Cancer, which is Meghan’s rising sign. On camera, both women emanate a maternal warmth, sensitivity and compassion. Championing women and children is par for the Cancerian course, but their social justice instincts arise from their common Aquarius south node, which speaks to lifetimes of humanitarian pursuits in their astrological DNA. Meghan and Diana’s charts both feature a Leo north node—which is the new energy they came to this lifetime to learn. Since Leo rules royalty, it’s no surprise that both women are learning karmic lessons through the crown, and that neither one found #MonarchyLife to be an easy fit. As for the diva moments that the gossip rags report on, that could simply be a struggle to follow royal protocols that a free-spirited Aquarius south node would find tedious or hard to master.

3. Is there really a feud between Kate and Meghan?

Astrologically speaking, there might be an unexpressed one. And we’ll blame it on their charts, starting with their Sun signs. As a Leo (Meghan) and a Capricorn (Kate), the two are five signs apart, which is an awkward angle known as a quincunx in astrospeak. People born at this astrological angle are like The Leo-Capricorn match can also be a challenging one because both are “alpha” signs, but in totally different ways. Where the Leo lioness reigns by being head-turning and effusive, the “steel magnolia” Capricorn maintains the upper hand through calm, controlled composure. Their charts seem to indicate a low-grade irritation or friction that’s always palpable in the background. To Kate, who has a Leo rising and was born on a full moon (making her a force to be reckoned with on her own), Meghan may seem like a wild card. Kate has a Capricorn south node, which is concerned with propriety and rules, while Meghan has her south node in Aquarius, the sign of rebellion and individuality. This can also add an air of low-grade friction between the two sisters-in-law. Our advice: They need to respect their differing styles and find a common project (one that doesn’t involve their husbands). Perhaps a charity tennis match to raise money for women or a cause they both care about?

While Harry has declared that he and his brother are “on different paths at the moment,” their cosmic loyalty runs deep! Harry’s moon (ruler of family and emotions) in steadfast Taurus is conjunct his brother’s affectionate Venus in Taurus. Their playful and caring connection can’t be easily broken. But it’s not all sweetness and sentiment! The princes have a planetary pact between Harry’s 0-degree Pluto (ruler of secrets, death and transformation) in Scorpio and William’s 0-degree Jupiter (guardian of truth-telling and wisdom) in Scorpio. They are bound by the loss of their mother on deeper levels than we imagine, a karmic bond that can’t be broken.

5. What does astrology say for Baby Archie? (Hint: we see a role model..and a supermodel!)

The leader this planet needs and deserves could be Archie Mountbatten-Windsor himself. A Taurus like great-grandma Queen Elizabeth II, Archie also has a Taurus ascendant and a powerful moon in Capricorn, the sign of leadership. In addition, his Saturn, Pluto and south node are in Capricorn. Perhaps he’ll be close to Aunt Kate and Uncle Will as he gets older, who also have their south nodes in Capricorn. Since this cosmic trio is in his tenth house of public image and authority, he could be a role model and a supermodel in one! Charisma and good looks will Archie’s astrological birthright, helped along by enchanting Neptune, magnetic Venus, glib Mercury and iconoclastic Uranus ALL in his glamorous twelfth house, a part of the zodiac that the camera loves. His Sun and moon are both in the assertive first house, which will give Archie confidence and the gift of gab, which he’s already starting to express. (See our interview with Oprah mag about Archie’s chart here!)