On February 5, 2019, the Year of the Earth Pig begins in Chinese astrology. As we bid farewell to the territorial Earth Dog that guarded 2018, a communal and social new lunar year begins.

Come on out of the doghouse—there’s a party in the pen! As we celebrate the Chinese (Lunar) New Year this February 5, 2019, the Year of the Earth Pig begins, kicking off the night before with the Lunar New Year’s Eve on February 4. This convivial cycle gives us a chance to “rest and digest” after two intense years. The pregnant pause of 2019 might even help us make some sense of all the global mudslinging that’s been going around. Serenity now?

(Discover and read all about your Chinese Horoscope sign here.)

The pleasant and genial Earth Pig’s arrival is a welcome relief after 2018’s Earth Dog antics. Dogs are pack animals, and in the past year, groups have stuck together out of “loyalty,” at times, to a fault. It’s widely agreed that the world has never felt more divided, and no surprise that the coop-stalking energy of 2017’s Fire Rooster and the border-guarding vibes of 2018’s Dog spiraled into xenophobic extremes. To wit, hate crimes have increased internationally and last year saw the tragic separation of children from parents who were seeking asylum at the U.S. border. 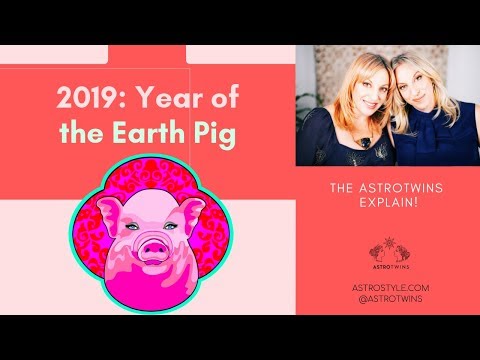 Reinstate that open-door policy! The Earth Pig’s M.O. is far more welcoming. This friendly creature can be quite the social butterfly, with pals from all walks of life. In 2019, a good bottle of vino—not a good fence—makes a good neighbor. (From #WineTime to #SwineTime?)

Pigs are complex communicators who dream, recognize their own names and have over twenty oinks and squeaks that have been identified with an actual language that they share. Some scientists believe that their social skills rival those of primates. Unlike the territorial animals who governed 2017 and 2018, Rooster and Dog, the easygoing Pig cohabitates well with other barnyard species. Perhaps 2019 will be the year where people start engaging in legitimate dialogues again, instead of simply barking at each through the “picture window” of social media.

During the Earth Dog’s tenure in 2018, our homes were our shelters. Many people spent a pretty penny on décor and tucked away in their comfy nests. But what’s the fun of splurging on the hand-loomed textiles and thrown-ceramic dishes if you can’t show them off to guests? Cocktail parties will be de rigueur again in 2019, with a rainbow coalition of guests in attendance. We might even resume “dressing for dinner,” instead of rocking the athleisure at five-star venues.

Forget what you heard about a messy room being a “pigsty” or people “sweating like pigs.” While real-world swines roll around in mud to cool off, they are clean creatures by nature. In the year ahead, our spaces may become a lot more orderly and neat. No leaving dishes stacked up by the sink for days after those soirees—or indulging in excess plastic packaging that winds up floating in the oceans and being digested by fish. (Scary!) Cleanliness is next to godliness during the Earth Pig year. That said, Pigs are known for having their lazy spells. This might be the year to hire a housekeeper for a regular deep clean, especially if you’re the type who “doesn’t do windows.”

Verify first: Who do you call a friend?

Alas, the Earth Pig isn’t always the most discerning creature. In 2019, guilt by association can be an issue for folks who naively get caught up with the wrong crowd. Mingling at the pub and exchanging pleasantries with friendly acquaintances? That’s one thing. But before declaring anyone “squad,” make sure you know their true background. Are they playing dirty behind the scenes? Appearances can be deceiving during the Year of the Earth Pig. Bottom line: Don’t let other people wipe their mud on your clean reputation and sully your name.

When it comes to love, the Earth Pig isn’t exactly the most romantic creature. In 2019, we may have to work a little harder to cultivate the sexy sparks. That said, the Pig is associated with Scorpio in the Western zodiac, and it’s certainly possible to bring out our “wild boars” in the bedroom. (Easy with those tusks, please.) Like Scorpio, the Pig is a water sign in the Chinese zodiac—capable of deep and powerful emotion. And yet, the intensity of those feelings might be a big much for people to bear, especially with the grounded Earth energy ruling this year. No need to process every trauma all at once in 2019; just deal in small and therapeutic kilobytes. And don’t forget that fun and laughter can be anti-depressants, too.

The last time we had an Earth Pig year was 1959. On the surface, it was an uneventful period in history—despite Fidel Castro coming into power on February 16, the grand finale to 1958’s Alpha-empowering Earth Dog cycle. But a few key developments emerged under the Earth Pig’s tenure. The microchip was invented, which is the foundation of the Digital Age in which we now live. Research officially began on the birth-control pill and Alaska and Hawaii became the 49th and 50th states—a nod to the Earth Pig’s inclusive diplomacy. The Barbie doll was introduced to the world in 1959, an unwitting symbol of the “plastic is fantastic” superficiality that can mark an Earth Pig year. And, the ribbon was cut on the visually arresting Guggenheim Museum in New York City, which houses many modern and “eccentric” works of art.

Interestingly, on July 24, 1959, then-Vice President Richard Nixon got swept into the famous “kitchen debate” with Soviet Premier Nikita Khrushchev. During an exhibition that was meant to foster cultural exchange between the U.S. and Russia, the gloves came off as the two leaders began a verbal battle about capitalism versus communism. The finger-pointing drama took place in a model kitchen that was set up as part of the exhibit as Nixon suggested that Khrushchev’s threats of using nuclear power could lead to war. In the end—and in true Earth Pig style—both leaders pulled back from the debate and claimed a desire for peace. With U.S. and Russian relations see-sawing wildly after proven election hacking and unprecedented summits, it will be interesting to see what this Earth Pig year brings.

Go easy on the indulgence.

Health-wise, Earth Pig years are times where we might have to monitor our diets more carefully. It’s easy to overdo it on the sweets and rich foods. (And watch that “liquid courage”!) Gentler forms of exercise like hiking and swimming are favored—and sleep sanctity should be honored in the name of keeping our immune systems strong.

Work hard, play hard? Don’t spend it all in one place.

Financially, the Earth Pig is slowly, but steadily, abundant. This zodiac sign has a solid work ethic and is willing to put in the hours to get ahead. Patience and willpower are the name of the game for anyone wishing to get ahead in 2019. And don’t forget the power of building friendly alliances with colleagues. Pigs are often the office optimists and motivators; the ones who will keep the team spirit burning bright.

Want to mark yourself as a rising star? In addition to delivering solid work in 2019, be the “crew glue” of your coworkers, rallying everyone for a company picnic or happy hour and keeping the momentum strong. Where Pigs can fall short is in setting clear-cut goals and a solid schedule. Work harder to implement those project management systems and you’ll be sure to succeed in 2019.

On a global level, employment will be a hot topic of discussion. Creating (and retaining) jobs will be an important mission for many countries, which may require some fancy economic footwork. Since people will be out and about more often, 2019 could bring a boon for the hospitality, fashion and entertainment industries. While the Earth Pig certainly doesn’t mind a powerful title, this is not necessarily a super-ambitious year. Quality of life is as important as a paycheck and some people may decide that a slower pace is more fulfilling than endlessly climbing the corporate ladder.

Money management may be a struggle in 2019. The indulgent Earth Pig loves fine food, vintage bubbles and elegant fashion house finds. Under this feel-good spell, there will be days when we might just want to buy a round of champagne for an entire bar of strangers. Fun, fun, fun…but what about the funds? In 2019, we’ll have to be careful not to burn as fast as we earn.

To avoid such slips, it would be wise to create a set-and-forget financial plan. Activate the auto-pay features for your monthly utilities or have money transferred into savings and investment accounts. If you don’t see it, you won’t spend it. Just make sure you also create an entertainment fund!

Next up: Read our resident poet laureate Myke Kofi’s Ode to the Earth Pig and check your Chinese Horoscope.