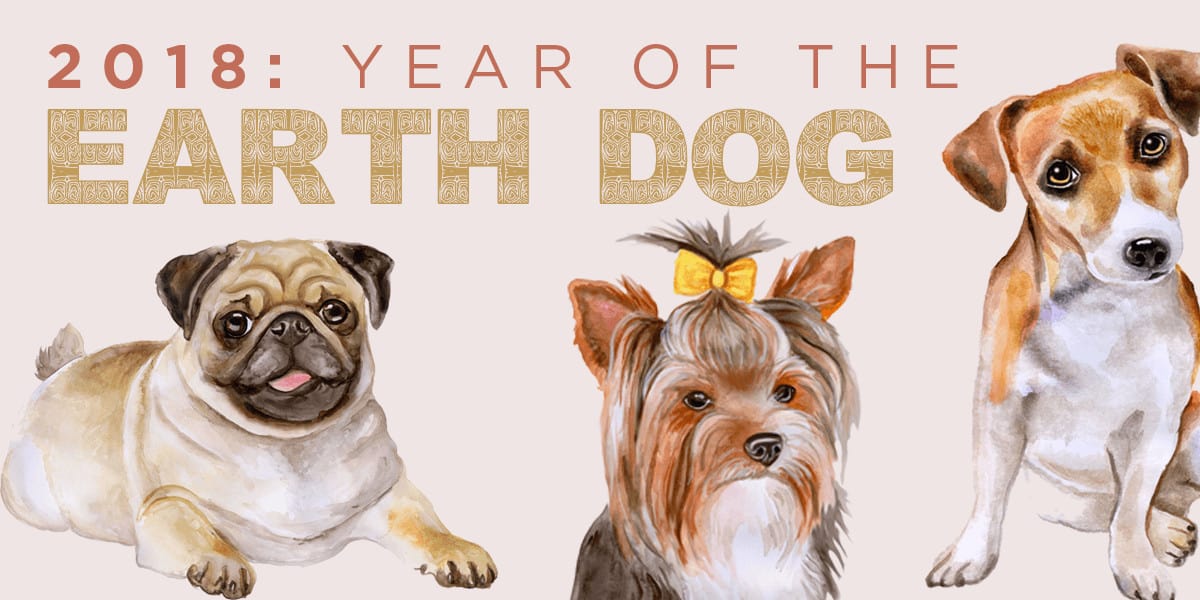 Let’s hear it for #PackGoals! Teamwork makes the dream work in 2018, as the loyal, hardworking Earth Dog trots in at the Chinese Lunar New Year on February 15.

After an exhausting year of hustling under the manic Fire Rooster’s command, who couldn’t use an extra set of claws and paws? In 2018, we’ll get by with a little help from our friends.

The question is…who will pass the strict inner circle criteria that the cosmic canine demands? Loyalty will be the new “L-word” during this Earth Dog year, and points must be earned through authentic allegiance.

Here are a few things to expect during the Earth Dog Year:

Mark your turf—but play well with others.

Dog years can make everyone a lot more territorial, and having a safe haven to call our own is a must in 2018. Home sales (and prices) will continue to trend up in many markets—and, by extension, so will the popularity of shelter blogs, home decor shows and Instagram interior decorators. With the earth element ruling in 2018, go green with your selections. Now’s the time for owners to invest in renewable energy solutions like solar and wind. Planting gardens and trees can also cleanse the air while improving curb appeal.

“Insta-BFFs and Facebook faux-friending will go the way of the dinosaur in 2018. As anyone who has unleashed their pet at a dog park can attest, canines have a systematic getting-to-know-you process.”

With xenophobia on a continued rise, however, this border patrolling can be a double-edged sword. As protective pups bark at any rando who crosses our property line, we can also grow unnecessarily suspicious of our good-willed neighbors. The challenge in 2018 will be setting healthy boundaries without erecting immovable walls. That said, the world can be a dangerous place and the question remains: How on-guard do we legit need to be? The Dog has an idea: Put people through the sniff test before allowing them into your pack. Insta-BFFs and Facebook faux-friending will go the way of the dinosaur in 2018. As anyone who has unleashed their pet at a dog park can attest, canines have a systematic getting-to-know-you process. Before they romp and play, they bark at each other, growl and, yes, get a whiff of each other’s most private parts.

Metaphorically, the Year of the Earth Dog requires a similar meet- and-greet strategy. Can we open up and show our most vulnerable sides to each other? That level of transparency could be considered crass, but in 2018, being “too real” can be a huge trust-builder. It’s kind of like the children’s book Everyone Poops, which was written with the intent of normalizing a bodily function that’s considered rather embarrassing— unless, of course, you’re a dog. This creature’s excretory habits are the most publicly observed and accepted. While we’re not suggesting you cop a squat on a city sidewalk, 2018 is the year for people to get honest and stop acting like their s**t don’t stink.

Keep calm and canine on.

More than almost any other emotion, dogs have a keen ability to sense fear. And during the Year of the Earth Dog, we can be easily riled, especially in the face of uncertainty. Politicians, bullies, and even trusted media sources that rely on clicks for revenue, can rile up the fear factor. A sanity saver? Create a grounding practice that utilizes the earth element. This can be as basic as a 30-minute morning walk or leaning against a tall tree for its stalwart support.

Dial down angst-inducing stimulants like caffeine and sugar, and reach for natural snacks like raw nuts, apple wedges and healthy proteins. Turn off news alerts and only check world events at set times so you aren’t sent into a panic spiral every time a “breaking headline” posts. Bring this digital detox to your bedroom and invest in a legit alarm clock instead of sleeping with your mobile phone on your nightstand.

As the Year of the Fire Cock turns over to the Year of the Earth Dog, will we see more Alpha male antics? Ugh, we’re afraid so. We have one more year of law and order ideology and scary dog-whistling politics to weather before the hedonistic Earth Boar shakes it up in 2019.

But 2018 comes with a warning label: Don’t mess with the bitches! The Dog is associated with Western astrology’s Libra, the sign of equality and justice. The age-old, imbalanced power dynamics between men and women will continue to raise hackles in 2018. Domineering types who use their stature to intimidate, control and abuse the pack could be locked out of the doghouse (and perhaps penned up in the Big House). The feminist revolution of 2018 might even reclaim the word “bitch” (perhaps bedazzled on a choker) as the upleveled pussy hat. Designers, you heard it here first.

Fierce & furry: fashion in the Year of the Dog.

On that note, dig out your poodle skirt! Fido-fierce fashion could find its way to the glossy mags in 2018—and with a “best in show” twist. Scorpio RuPaul already has Jupiter on his side this year, but the runway competitions could grow to insane proportions. With Jupiter in Scorpio, fetishwear is already making a comeback. A haute harness could replace the corset belt as a way to dress up denim along with collar-style necklaces and studded leather accents. Coats with curly faux fur will also remain on-trend. Shiny, glossy finishes may dominate beauty blogs from nails to lips to tresses. Curly hair, don’t care? The “poodle pouf” could put a fresh spin on the faux-hawk in 2018.

Relationships get strong and stable.

Dog years can be stabilizing for relationships, as the association with marriage-minded Libra will put folks in a mate-for-life mindset. Heavy petting, anyone? “I need more affection” may be a common cry in 2018. Couples should slow down and reconnect through touch. Single? You could find love through a pack-mate’s introduction, so don’t skip out on the group hangs. Tinder and dating apps could take a backseat to IRL meetups. During Dog years, body language and chemistry (yep, those pheromones are real) are the true litmus test—and can’t be sensed on screen.

“Since the zodiac’s Dog is associated with diplomatic Libra, this is the year to adopt a peaceful approach to conflict resolution.”

While Jupiter in Scorpio will expedite detective work, should we let sleeping dogs lie? Digging is a Dog year tendency, but one that can open Pandora’s box. Some bones are best left buried, especially if matters were resolved long ago. But if you need to excavate during this Earth Dog year, be prepared to discover more than you bargained for hidden below the crust. Old cases may be reopened as new evidence is submitted. Toto, we are not in Kansas anymore.

Daily play breaks are a must in the Year of the Mutt—the more physical the better. But don’t expect to snuff out the midnight oil lamp when you get back from your run through the park. The Earth Dog needs creature comforts and is willing to work hard for them. With partnership-oriented Libra being the Western celestial signature for the Pooch, joint ventures are the best way to avoid workaholism and win all the toys. The sharing economy, like ride pools and coworking offices, will continue to flourish in 2018.

Clever communication ruled the day under the Rooster’s reign, but the Dog declares a ceasefire to the 2017 Twitter wars. It’s bittersweet, since the cocky Fire Rooster raised #hashtag humor to a whole new level. But in the end, those constant clapbacks
only escalated the battle. Doggie-style discussions are far more basic. Think: simple commands uttered in an authoritative tone of voice.

Body language will speak volumes, too. TV’s Cesar Milan, a.k.a. The Dog Whisperer, underscored the importance of a “calm-assertive” demeanor as the key to keeping unruly canines in check. In 2018, you can work the room like Milan in a pack of pit bulls. Instead of racking your brain for a snappy comeback, strengthen your posture.

Since the zodiac’s Dog is associated with diplomatic Libra, this is the year to adopt a peaceful approach to conflict resolution. And what’s the best way to reinforce good behavior in dogs, and yes, humans? Not shouting or spanking them with a newspaper or locking them up in a small space. That just makes them sneaky, scared and ferocious.

Instead, opt for praise and positive reinforcement (along with that posture). Lead with compliments and be very vocal when you’re happy with the way things are going. (“Who’s a good boyyyyyy?!”) Buffer critiques in a “praise sandwich,” starting and ending with an acknowledgment and slipping feedback in between like a creamy filling—or maybe a heartworm pill wrapped in a slice of deli meat.

By acknowledging the good in others, we might just stand a chance at world peace in 2018. Now, who wants a cookie?