10 Reasons to Take Bitcoin and Cryptocurrency Seriously in 2021, According to Financial Astrology lo 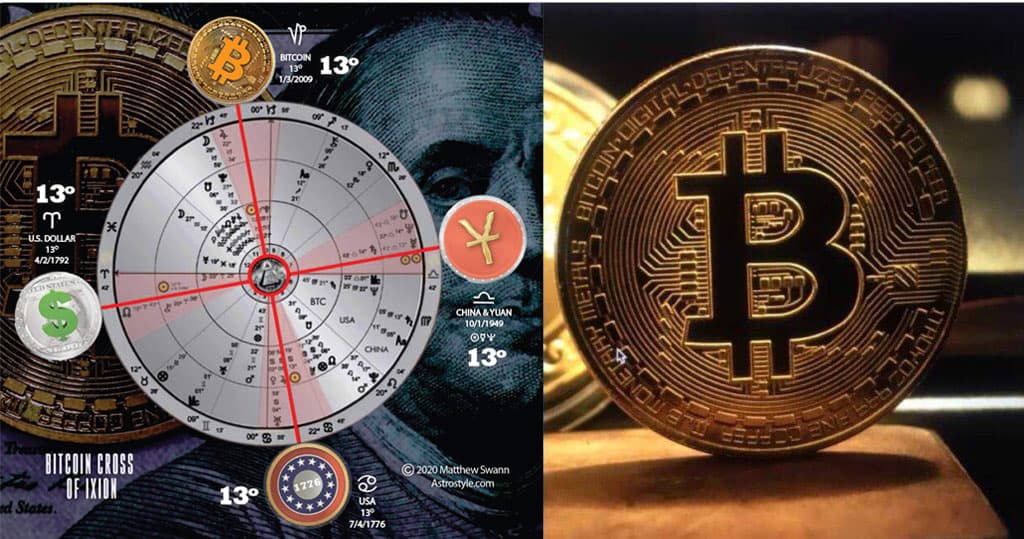 You say you want a revolution? Ready or not, a financial one has arrived. The stars are trending for Bitcoin, cryptocurrency and precious metals in 2021, as the technological Age of Aquarius moves the world into digital dollars this decade.

Editor’s note: While cryptocurrency was and still is met with skepticism by some, Astrostyle has long predicted disruption in the world of finance and currency. For years we’ve worked closely with our resident astrologer Matthew Swann of Black Swann Astrology, who has charted the ascent of Bitcoin since 2011, mapping its historic rise to $23K and beyond in 2020.

In The AstroTwins’ 2020 Horoscope book, we stated that this disruption (a “Black Swan event,” as we predicted) would coincide with a financial revolution scripted in the stars for the early 2020s, gaining major momentum between 2022-27 with a single Bitcoin surpassing $1 million in price.

Yet, so many individuals are still unaware of the #1 rising asset in the world and its potential.

As always, when massive disruptions to society and institutions like governments, banking and monetary systems occur, Astrostyle divines from planetary patterns for insight.

Here are 10 reasons why Bitcoin is capturing the attention of major corporations, institutional investors and their financial analysts in 2021—and why you should pay attention, too.

1. Uranus, the planet of technology and disruption, is in the sign of money (Taurus).

Ever since high-tech Uranus entered Taurus in May 2018, we’ve predicted a rise of digital currency as an outcome inscribed in our 2018 Planetary Planner book.

We predict that Bitcoin, Ethereum and many other cryptocurrencies like Cardano (named after the 16th century Italian polymath astrologer Gerolamo Cardano) will continue to gain momentum as Uranus spins through Taurus until April 2026. Afterward, Uranus gets even more “wired” when it moves into Gemini, the Mercury-ruled sign that bodes well for anything tech-oriented like digital money. 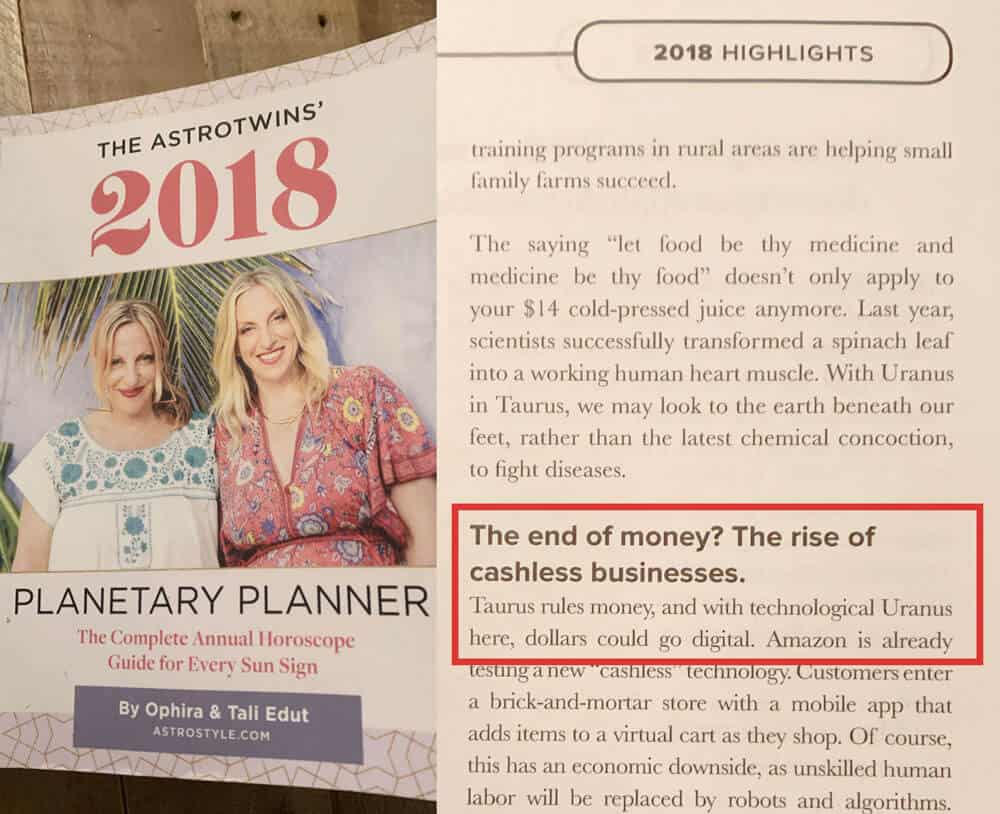 2. Uranus and old-school Saturn will have 3 planetary showdowns in 2021.

On February 17, June 15 and December 24, revolutionizer Uranus in Taurus will lock into embattled 90-degree angles (squares) with hard-driving Saturn in Aquarius, the sign of all things digital.

For historical reference, in 1930 and 1931, Saturn-Uranus squares coincided with the continuing crash of the U.S. Stock Market. From August 1929 to March 1933, during the nadir of the U.S. Great Depression, Saturn was moving between Capricorn and Aquarius, just as it did in February and March 2020, when we experienced a Black Swan economic crisis triggered by the pandemic as the Dow Jones Industrial Average plunged over 10,000 points.

3. For the first time in 250 years, Pluto is traveling through the Saturn-ruled signs of Capricorn and Aquarius. Its last cycle here led to the U.S. Dollar being minted after the pre-dollar paper currency (the Continental) went belly-up.

As an astrological archetype, Pluto destroys in order to rebuild. During the tiny powerhouse’s last visit to fiscal Capricorn in the 1770s, the American colonists created their first paper currency, the Continental, issuing it as a means to fight the tyranny of the British who responded by counterfeiting the paper currency in lockstep with the freedom-seeking colonists.

The newly weaponized Continental currency then lost most of its value due to overprinting and inflation. We are again entering a similar era of profound cyclical change.

On February 21, 2022 (for all intents and purposes 2/22/22, an easier date to remember), Pluto will again return to 27°33’ Capricorn for the first time since July 4, 1776, when the United States was founded 246 years prior. This historic Pluto return for America will bring major transformations to the nation’s economy and the meteoric rise of cryptocurrencies like Bitcoin will be part of that epic, plutonic story.

On 2/22/22, the USA will also have its second Neptune opposition, as Neptune returns to 22° Pisces, opposing its natal position of 22° Virgo in the USA’s chart (and squaring the country’s natal Mars in Gemini). This is the first Neptune opposition since the years leading up the US Civil War in the mid-1800s, a time that also marked the rise of women’s suffrage, abolitionism and the Spiritualist movement. Note: We’ve included the numerological significance of 22, a number recurring enough for us to pay strong attention, in our 2021 Horoscope book. There are 22 Major Arcana in the Tarot, 22 Hebrew letters (which together in Kabbalah make up the name of God) and many other symbolic markers.

4. The charts of Bitcoin, the USA, the US Dollar, China and its national currency, the renminbi, all form a Grand Cardinal Cross.

Tension between these two powerful nations and their currencies is scripted in the stars. Astrostyle’s resident astrologer Matthew Swann has pinpointed a stunning chart which shows a massive five-way solar standoff as the USA’s Sun is at 13° Cancer, the US Dollar’s Sun is at 13° Aries, Bitcoin’s Sun is at 13° Capricorn and the founding of both China and its renminbi have a Libra stellium of 13° Mercury, 14° Neptune and 7° Sun. 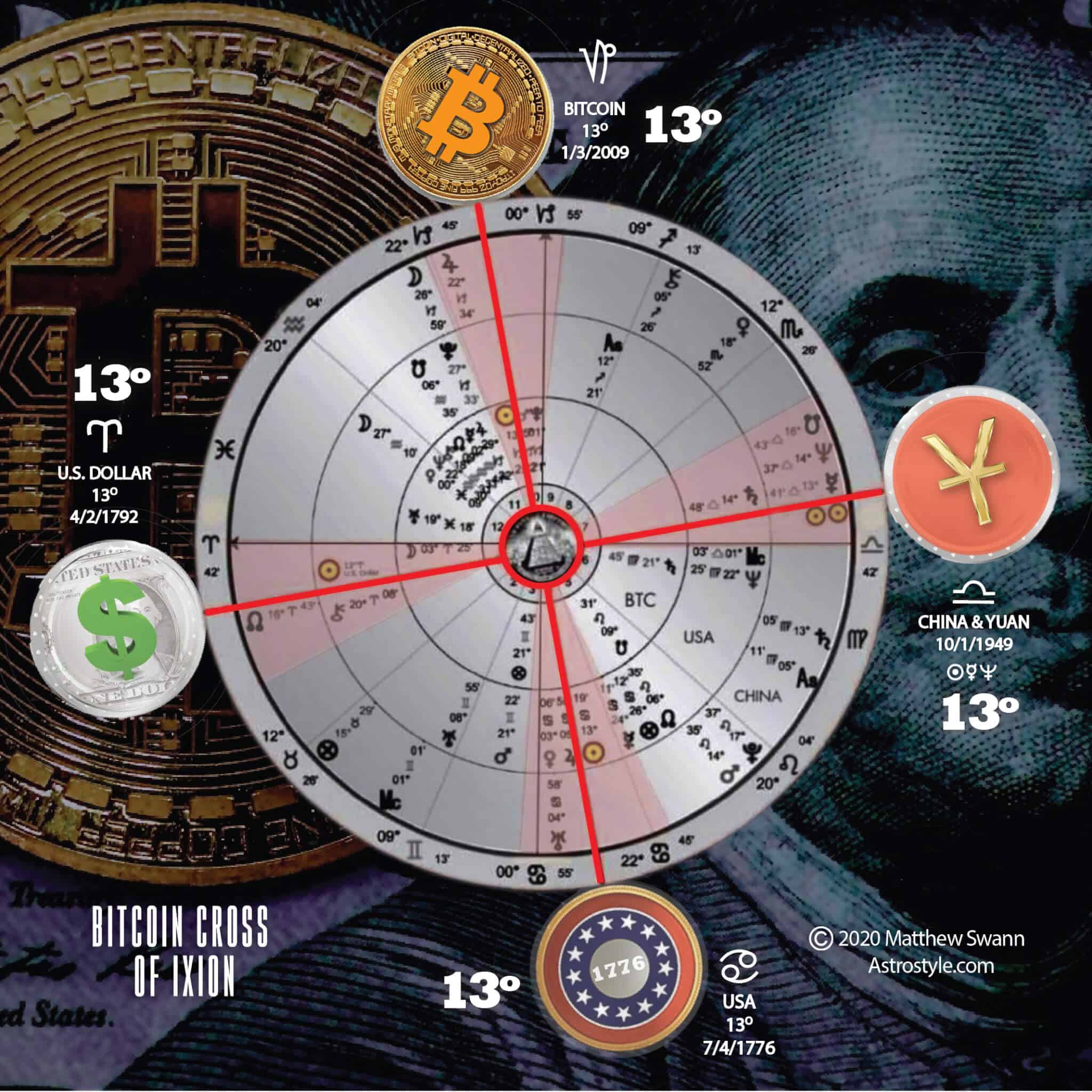 Interestingly, the number 13 in Tarot is associated with the Death card, linked to the planet Pluto in astrology and symbolic of death and rebirth. The imprint of Plutonomics is undeniable in this chart—and speaks to a massive tension inherent in the cosmic relationship between these two embattled nations, the USA and China, and their currencies.

At this writing, China has successfully released a “gift” test version of its first national digital Yuan currency, which Black Swann Astrology predicts will be released for worldwide adoption at the USA Pluto return on 2/22/22, a date that also coincides with the close of the Beijing Winter Olympics and the Chinese Lunar New Year of the Tiger.

5. The “Aquarian Decade” is here and it will bring a digital financial revolution.

We’ve been shot out of the cosmic cannon at the Great Conjunction of Jupiter and Saturn at 0°29’ Aquarius, the sign of technology and freedom, on December 21, 2020. Jupiter is in Aquarius until December 2021, which will bring a powerful surge of interest and optimism around cryptocurrencies—which we’re calling The Aquarian Technocalypse.

With suppressive Saturn in freedom-seeking Aquarius until March 2023, and controlling Pluto moving into Aquarius from 2023 to 2044, it’s not going to be all decentralized dinero and “power to the people” communal sharing.

Quite the opposite: we may very well see massive tension of people fighting for economic liberation as governments (Saturn) and plutocratic wealth-holders (Pluto) attempt to wrest control of the digital financial revolution.

Expect everything from the world’s wealthiest “one percent” buying up the remaining stash of Bitcoin to governments and large corporations minting their own digital currency and attempting to regulate the cryptocurrency market at a federal level. In fact, this is already underway, and the dichotomy will only intensify as the contrasting energies of Saturn and Pluto’s control clashes with Aquarian/Uranian quests for freedom.

6. The American Revolution 2.0 is also here—and it wants to emancipate money from the state.

Because of the above one-percent financial reality, the next global revolution will be the attempt to liberate money from the state. How can that be? The reason is simple: Money is on the loose and “in the wild” due to the technology of permissionless, “peer-to-peer” digital currencies that allow individuals to exchange funds without any kind of third-party intermediary like a bank or government.

Given the speed of today’s ultimate “outlier” tech lord, the cryptic Satoshi Nakamoto, the unidentified creator of Bitcoin, this emancipation machine is likely just booting up.

7. The Years of the Metal Rat (2020) and Metal Ox (2021) have people seeking new “hard” reserve assets like Bitcoin to add to their precious metals holdings.

For the first time since 2008 and 2009—the years of the Great Recession and Bitcoin’s first genesis block—we are in the Chinese Lunar Years of the resourceful Rat and the steady Ox. Because 2020 and 2021 end in the binary-like “0” and “1,” they are governed by the logical and shrewd Metal element, adding more digital mindfulness to the moment.

In 2020, the Year of the Metal Rat, the metals market (gold and silver) surged as the pandemic sent people seeking safe haven assets. At this writing, there’s even a coin shortage at the U.S. Mint, an apt forging of a Metal-ruled year and stringent Saturn’s last hurrah in fiscal Capricorn. With tech-savvy Aquarius ruling our digitized skies during the 2021 Metal Ox year, along with the Saturn-Uranus squares pulling us between the tangible old and algorithmic new, we’re likely to see a rush toward stacking of both gold and cryptocurrencies as the preferred pandemic reserve assets for everyone.

(Note: The last two Rat and Ox years, 2008 and 2009, were ruled by the Earth element, which impacted more “mundane,” tangible goods and assets, industrial manufacturing, even such “ephemera” like our fiat paper currency included, signaling a fast-approaching cashless state. This was reflected throughout the country, from the housing market collapse to the stimulus bailouts of the auto industry’s Big Three.)

Bitcoin’s first genesis block was minted on January 3, 2009. Expansive and trailblazing Jupiter, the planet of luck and growth, was at 29° Capricorn on that date. Mid-December 2020, Jupiter returned to 29° Capricorn for the first time since Bitcoin’s birth. Simultaneously, old-school, hard-asset Saturn is also at 29° Capricorn, which we see as a cosmic catalyst for Bitcoin’s skyrocketing value to new all-time highs, reflecting the qualities of both planets in conjunction —power and force— and making for a new “store of value” surging in price and popularity, coinciding with the Jupiter super-return.

Capricorn Ben Franklin (born January 17) himself would approve of the Great Bitcoin Conjunction & Jupiter return as it passes his own natal Sun at 27°11′, which is also conjunct the natal US Pluto at 27°33′, a Ben Franklin super-conjunction by any measure. At this writing on December 17, 2020, Bitcoin has cleared the $20K mark for the first time ever—an all-time high. If prior transits are any indication, we’d expect a profit-taking selloff to occur during January 2021—the “dip”—which could bring Bitcoin down 20 percent before it again recapitulates upward during the 2021 Bitcoin boom. Expect spectacular moves upward for Bitcoin in 2021.

9. Pluto, the “destroy and rebuild” planet, is in Capricorn, which rules governments and economies, from 2008 to 2024—unleashing a slow and steady financial transmutation.

The peculiar thing about history is that it sneaks up on us, and we often don’t realize it’s being made until it crosses a certain tipping point in our awareness. As we near the end of a 16-year Pluto cycle, the pieces are coming together. When Pluto visits a sign every 246 years, everything that falls under its rulership can get destroyed in order for us to reform and rebuild—and when Pluto transits Capricorn and Aquarius, both ruled by Saturn, that means the total evolution of money. It’s yet another example of Plutonomics.

Since 2008, the year of the Great Recession, Pluto has been in Capricorn, bringing us the Obama, Trump and Biden administrations and heavy Capricorn themes of hierarchy, economics and banking. Pluto is in institutional Capricorn until 2024, entering Aquarius briefly on March 23, 2023 (3/23/23) then for an extended 20-year transit in 2024.

In 2016, when Pluto reached the halfway point of its journey through Capricorn and came into a 10-degree orb of the USA’s natal Pluto, the U.S. Treasury announced plans for Harriet Tubman to replace Andrew Jackson as the face of the $20 bill. Its release was slated for August 2020 to coincide with the 100th anniversary of the 19th Amendment, which afforded US women the Constitutional right to vote.

In 2019, as Pluto reached 20° Capricorn and crept within a two-degree orb of Saturn (at 22° Cap), Treasury Secretary Steve Mnuchin (a 29° Sagittarius/Capricorn cusp) postponed the Tubman currency debut until 2028, citing concerns about counterfeiting, which is also the domain of shadowy Pluto.

10. As the Aquarian Decade progresses and more planets enter the high-tech air signs, quantum computing will become the dominant technology to reckon with, imposing itself upon every new blockchain project by the 2030s.

Technology, by its very nature, is also subject to evolutionary forces that bring new offerings, such as quantum computing, which may threaten to erode and even make obsolete all that precedes them. The lesson? Money is a technology, and technology always disrupts. With this in mind, Bitcoin is really just the beginning of a new high-tech, crytographic economic paradigm.