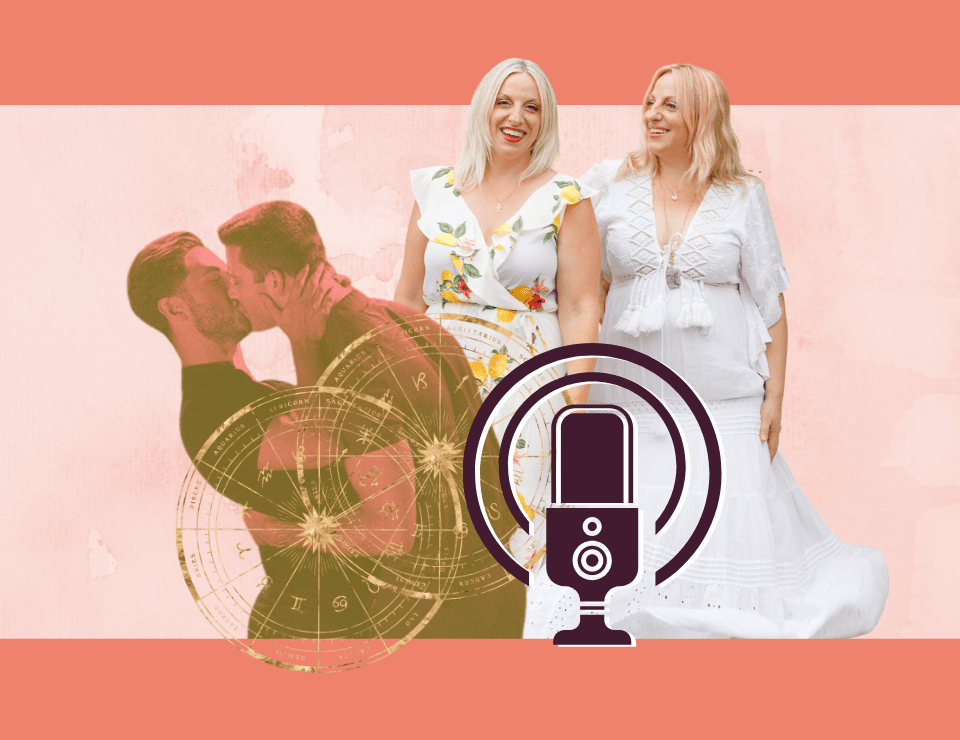 Ophi joined Jeff Perla, podcast host of Behind the Bum and his partner, Alex Can Gurp, (who met on Amazon Prime’s The One That Got Away), for a convo about astrology birth charts on the episode, “Astrology Gays.”

“Everybody wants to know ‘is astrology real?’ Should I be reading into the signs? Is this person compatible because of astrology?” Jeff asked in the episode, “Astrology Gays,” with Ophi Edut, one half of The AstroTwins.

Ophi assured Jeff (a Libra/air sign) and Alex (a Sagittarius/fire sign) that astrology is real. It can be a guide for navigating life, but there will always be free-will, such as when using astrology for compatibility.

She said to think of it as a “performance enhancer versus a be-all/end all.

“Astrology is almost like a spiritual science or algorithm that helps you see things about yourself in other people,” Ophi says, and that these things are helpful to cut through the BS that people put out there when they first introduce themselves as a front or a curated personality.

Astrology says: “I want to know who you really are.”

Ophi explained to Jeff and Alex on the “Astrology Gays” episode that you can go way beyond your Sun sign when using astrology to learn about yourself or find compatibility with others.

And she debunks the myth that you aren’t compatible with certain signs. “You can find compatibility with any sign,” she says.

“We all contain a lot of contradictions. A chorus of personalities within us. Every planet expresses a different part of us.” Which is why when you read your horoscope you may not identify with it!”

Your Sun sign/zodiac sign is the basis for which most popular horoscopes are written. So it’s no wonder that when Jeff said when he reads his Libra horoscope, he often doesn’t identify with it.

“That’s not unusual,” Ophi says, because horoscopes are written for Sun signs and don’t take into account your entire chart. It would be impossible for horoscopes to do this because your chart is as unique as you; it’s a literal “screenshot of the sky” on the date, time and location where you were born.

Learn about your “screenshot” (birth chart)

Your Big 3 and other planet placements

Go beyond your zodiac sign and do your chart to find your Big 3:

Your Sun sign, which defines you in broad strokes.

Your rising sign, which is the “outer you,” the image you project into the world.

Your moon sign, which is the “inner you,” the part that isn’t seen by others but drives your impulses and motives.

Additionally, you can learn about the other planets and what they mean based on their placement in your birth chart. This gives you an even more complete picture of yourself (or potential mates).

Mercury reveals how you communicate.

Venus shows what turns you on.

“You can see a lot about people in their chart,” Ophi tells Jeff and Alex, but reminds them about freewill. “You have the ability to decide to change things.”

Other topics Ophi went into detail about with Jeff and Alex on the “Astrology Gays” episode of Behind the Bum:

Compatibility between any zodiac sign. Check out Astrostyle’s Love Matcher to learn about matches for your sign.

How the distance between zodiac signs can reveal energy and compatibility

The elements of astrology in love: fire, earth, air and water (these were the basis for Cosmic Love, the Amazon Prime dating show featuring the astrology expertise of The AstroTwins)

Supercouple charts: the zodiac sign of two people in a relationship

Ophi created a composite chart on “Astrology Gays” for Jeff and Alex. A composite chart—or Supercouple chart as the AstroTwins call it in their new book—takes two charts and blends them into one and that becomes the zodiac sign of a relationship.

Jeff and Alex’s Supercouple Sun sign is Scorpio, which Ophi says vibes with the couple’s life of budding fame and how they came together on TV.