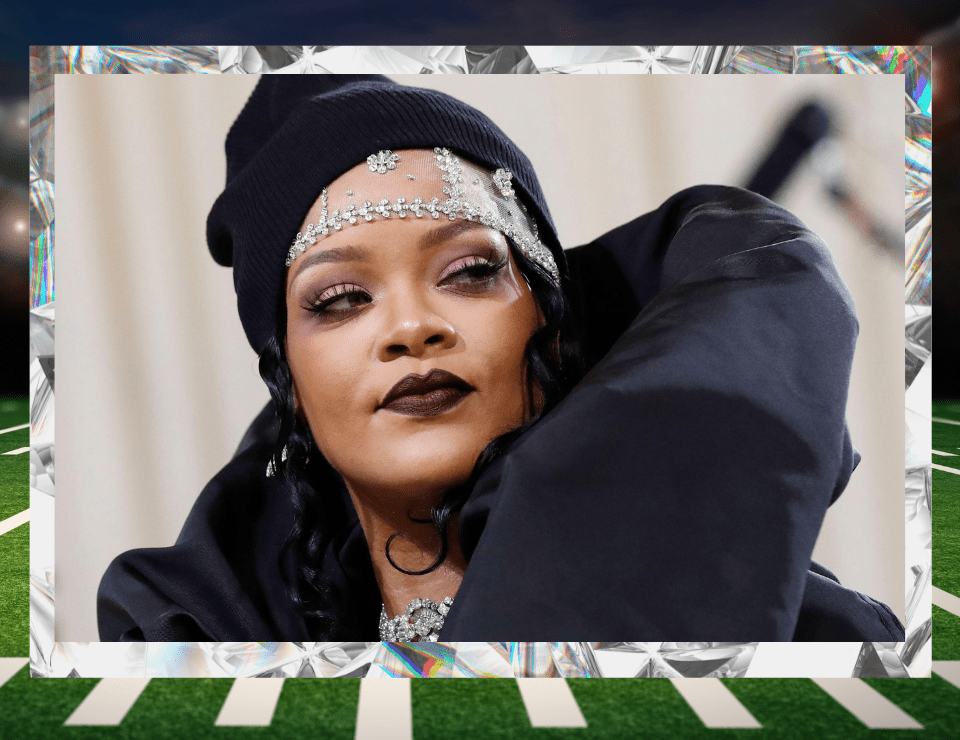 What does Rihanna’s astrology birth chart say about the artist and her headlining the halftime show for the Super Bowl on February 12, 2023?

Rihanna recently accepted the invitation to perform the halftime show at the 2023 Super Bowl. Not too long ago (in 2019), the Pisces pop icon actually turned down the NFL’s invitation to perform. At the time, Rihanna said she declined because of the NFL’s treatment of Colin Kaepernick, the quarterback-slash-activist who famously took a knee during the national anthem at games to draw awareness to police brutality and racial inequality in the U.S.

The super bowl performance announcement has her fans excited because she hasn’t performed in concert since February 2019.

What are Rihanna’s “Big 3” in astrology?

Rihanna (born Robyn Rihanna Fenty), came into the world on February 20, 1988, in St. Michael parish, Barbados. She is a Pisces with both Aries rising and an Aries moon.

Find your Sun, rising and moon signs, by doing a free chart on Astrostyle. Learn about the meaning of your Big 3 here.

What does astrology say about Rihanna’s career and music?

Let’s start with her Sun sign and go through some key parts of Rihanna’s birth, or natal, chart.

Rihanna is a Pisces Sun

Pisces, the fantasy-fueled last sign of the zodiac, is the sign of imagination and art, so it’s no wonder that she has had so many chart-topping songs. And as one of the four eclectic mutable signs (along with Gemini, Virgo and Sagittarius) she has a knack for mixing genres. Spanning pop, dance, R&B, and other styles, her music is dripping with the creativity of her Pisces energy!

And as Pisces energy is deeply empathetic, she’s known for being involved in many humanitarian causes. She was named “Humanitarian of the Year” in 2017 by the Harvard Foundation for her work in advocating for education, health care and girls’ rights. This trait also aligns with her decision to not perform at the Super Bowl a few years ago.

Jupiter toured Pisces for a few chunks of 2022. A gift of that transit was expansion for Rihanna, including her new role as a mother to a Taurus son born on May 13, with Libra A$AP Rocky. Jupiter actually dipped into Aries when her son was born and sets up shop there again for the Super Bowl date (the full Jupiter in Aries transit dates are December 20, 2022 to May 16, 2023).

Jupiter in Aries highlights Rihanna’s second house of income, daily work and self-esteem. The “boss b*#@#” planet” visits each sign every 12-13 years. Rihanna, who already has a sizable empire thanks to her Fenty beauty brand, could really level up her bank accounts under this transit. She made Forbes’ billionaires list in 2021, recognized as “the richest female musician on the planet” and noted for building her empire on more than just music. Her further ascent as a mogul will know no bounds when Jupiter is in Aries at Super Bowl time.

The fire of Aries in Rihanna’s chart

Aries rising signs are the firecrackers of the zodiac, and Rihanna is no exception!

As an Aries rising, Rihanna’s chart ruler is Mars, the planet that governs passion and sex drive. Mars has a fierce nature. It’s not hard to see how that combination dominates not only Rihanna’s music, but provides the fuel for all her creative projects and endeavors.

With her moon in Aries as well, Rihanna’s inner emotions and desires line up with the outer impression of her rising sign. This alignment allows her to easily channel her emotional experience into her music.

In addition to her moon and rising signs, Rihanna also has Venus and Jupiter in Aries.

Venus is the planet of love, beauty and harmony, and it tells us who you will fall for…and how. This can be challenging because Aries is opposite the sign, Libra, that the love planet rules. (In astrospeak, Venus is “in detriment” in Aries, a harder placement for the planet of amour.) People with Venus in attention-loving Aries tend to fall head over heels in love fast, and their romantic journey can be dominated with a lot of twists and turns. To quote Rihanna, a Venus in Aries wants you to make her feel, “like I’m the only girl in the world.”

Meanwhile Jupiter inspires us to grow and take risks. Someone with Jupiter in Aries may be a real self-starter who cares out their own bold path through life. As the second-best-selling female music artist of all-time, Rihanna has certainly done that!

Jupiter takes 12-13 years to complete an orbit, which means it spends about a year in each of the zodiac signs during its trip. During the Super Bowl, Jupiter will be right at home for her as it transits through Aries, ensuring that she will shine bright like a diamond and move the crowds with intense emotion. This could be a particularly stirring performance during Rihanna’s fateful Jupiter return!

The grounding of Capricorn in Rihanna’s chart

This zodiac sign’s energy brings the benefits of structure, delayed gratification and setting goals for the long haul. It makes a perfect counterbalance to the fire and water in her chart, supporting her in her long-term ambitions.

This is especially true with her Saturn placement. The many-ringed planet governs time, along with the wisdom and expertise that come from steady growth. Saturn rules Capricorn, so it is right at home in Rihanna’s chart. Born with Saturn in Capricorn, Rihanna is able to persevere through challenges and keep going as she rises to greater and greater success!

Uranus rules our higher minds and showcases our weirdness and youthful inclinations. Rihanna’s Uranus in Capricorn placement indicates an ability to channel her unique style and perspective into success as she rises up the ranks in the entertainment world.

The power of Neptune

The planet of creativity, Neptune rules the invisible realm. While other artists may struggle to stay focused and channel their creativity into long-term success, Neptune in Capricorn supports Rihanna having a breathtaking body of creative work under her umbrella (ella…ella), and in being a fierce business woman as well.

In 2012, Rihanna opened the doors to her global charity, the Clara Lionel Foundation. The foundation is named after her grandparents—a nod to the Capricorn-ruled respect and admiration for elders. The foundation’s philanthropic efforts include providing health care (Neptune is the healer) and education (which falls under the ninth house) for impoverished countries around the globe. In 2021, her home country declared her a National Hero of Barbados (and an ambassador long before that), due in part to her work in bringing relief funding after the island was ravaged by hurricanes.

But S.O.S.! With Neptune in her thrill-seeking ninth house, Rihanna has done her share of playing with fire, even alluding to a love of danger with songs like S&M. In 2009, illusions were shattered when ex-boyfriend Chris Brown violently attacked her on the way to the Grammy Awards, exposing the truth about their abusive relationship.

In a 2012 interview, a teary Rihanna revealed to Oprah that she felt a sense of protectiveness for Brown. “He made that mistake because he needed help. Who’s going to help him?”

With Neptune in Capricorn, it makes sense that Rihanna would have compassion for the wounded (and toxic) masculine.

This is an example of the complicated emotions Neptune can churn up—from unparalleled empathy to an ability to sacrifice one’s own needs to be there for another. Is it denial? Delusion? Enlightenment? When it comes to Neptune, it might just be all of the above.

The influence of Rihanna’s lunar nodes

The moon’s North and South Nodes are mathematical points on the chart that fall in two opposite zodiac signs.

The North Node can tell you where your destiny lies, while the South Node indicates who you were in past lives.

Rihanna’s Pisces North Node speaks to a destiny filled with creative freedom and excellence. Other famous Pisces North Nodes include Jay-Z, Jennifer Lopez, Gwen Stefani, Sting, and Adele, so you can see its influence throughout the world of music!

Her Virgo South Node could indicate a tendency toward perfectionism. Many Virgo South Nodes struggle with anxiety and tend to be overly hard on themselves. While that can be a difficult thing to move through, it can also lead to tremendous creative output with the right support systems.

In numerology, Rihanna is a Life Path 3

Rihanna is a Life Path 3 in numerology, which is calculated by adding up the numbers in Rihanna’s birthday and distilling them to a single digit.

According to Astrostyle’s numerologist, Felicia Bender, her purpose is to “develop creative self-expression, emotional sensitivity, joy, and inspired communication.” Check!

In Chinese astrology, Rihanna is an earth dragon

Born after the Aquarius new moon in 1988, Rihanna is an earth dragon in Chinese astrology. The only non-animal of the Chinese zodiac, Dragons are known for being powerful, mystical and intense.

People born in years ending with 8 and 9 are said to be born under the earth element in this system and are born providers. No wonder the Fenty mogul continues to command across so many platforms!

During the Super Bowl on February 12, 2023, the Sun will be in sporty Aquarius. The moon will be in sultry Scorpio, ensuring plenty of sexy magic and surprises during Rihanna’s performance!