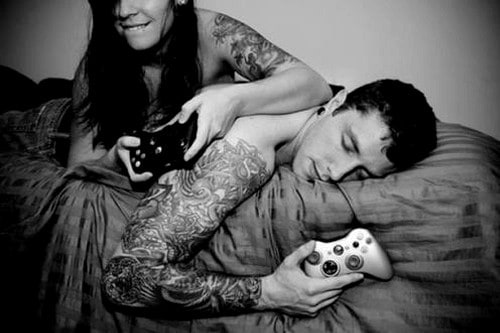 When it comes to relationships, the Aquarius man will settle for nothing short of a sexual and romantic revolution. Like a bedside Che Guevera, he wants to shake up love as we know it and bring romance solidly into the 21st century—or perhaps even the 22nd.

The aforementioned Aquarius Dr. Lobster has founded a movement called Modern Romantic Completionism. Another Aquarius man we know founded Cuddle Party, a national series of sex- and substance-free workshops where people get together in their pajamas and just…cuddle. His website describes the event as a “playful, fun workshop…for people to rediscover non-sexual touch and affection, a space to reframe assumptions about men and women, and a great networking event to meet new friends, roommates, business partners and significant others.” Classic Aquarius.

Interdependence is the name of his game. In fact, it was our Aquarius friend Miguel who first introduced us to this term when describing his perfect relationship. You both have full lives, then come together voluntarily, to unwind, grow and have fun. He longs to coexist, rather than merge. Of course, this can only happen once the free-spirited Aquarius man actually decides he’s ready for a relationship. When you’re from another planet, bonding with humans can be hard, after all. He can be aloof and awkward, hesitant to commit. The Aquarius man doesn’t want to be tied to one woman until he’s sampled the whole panacea of options.

However, in his mid- to late 30s, the Aquarius man may finally decide to reckon with those demons known as feelings. He might plunge into a philosophical movement or a spiritual modality to explore his emotions safely, in an almost scientific way. (Either that, or he smokes a lot of weed and feels those funny sensations—love! anger! sadness!—that are so foreign to him otherwise.)

Once he learns how to process his emotions, this humanitarian sign wants to share what he’s learned on his quest. Like a butterfly emerging from its cocoon, the prank-pulling eternal jokester emerges as the ultimate SNAG (Sensitive New Age Guy). Formerly squeamish about anything more touchy-feely than a backslapping hug or a high five, he suddenly starts training for his massage license, or becomes an eager volunteer to give out shoulder rubs.

Aquarius is the sign of the future, and this can prevent him from living in the moment. One Aquarian, laughing at his own quandry, admits, “I just need to know how everything will turn out; then I can relax.” Another Aquarius describes relationships where, out of nervousness, he locked himself into a commitment before really being sure about the person, then felt trapped. His anxiety and nerves often get the best of him, preventing him from forging deeper bonds because of this knee-jerk response. Tranquilizer, anyone?

If an Aquarius does sign on for the long haul, he needs to be handled with care. Once his heart is invested, the Aqaurius man can be hypersensitive and overly intense—no longer the cool, devil-may-care dude holding court at the party. As Gary says, “My problem is I think too much, break down and analyze everything. If a woman is late, I think it means she doesn’t care.”

It’s an interesting paradox: commitment can either tie you down or set you free. Being an Air sign, the Aquarius man needs a relationship that gives him wings and a purpose. “I like to feel useful,” says Gary. Aquarius wants a partner to be his pupil, travelmate and sounding board. Above all, he needs to be trusted. “Anytime the words ‘you should’ come out of my mouth, he shuts off,” says one woman of her Aquarius boyfriend. “So now I say things like ‘have you considered…’” She learned to be nurturing, but to never mother or smother him. It’s a fine balance.

The Aquarius man will never be in a relationship for relationship’s sake. But to fulfill a vision, or live out a future that inspires and excites him with endless possibility? He’s in. “It’s all about having the whole future mapped,” says Gary. If you fit with his master plan, pack your sleeping bag and hiking shoes. You never know where you’ll end up—but he will remain by your side, no matter where that is.