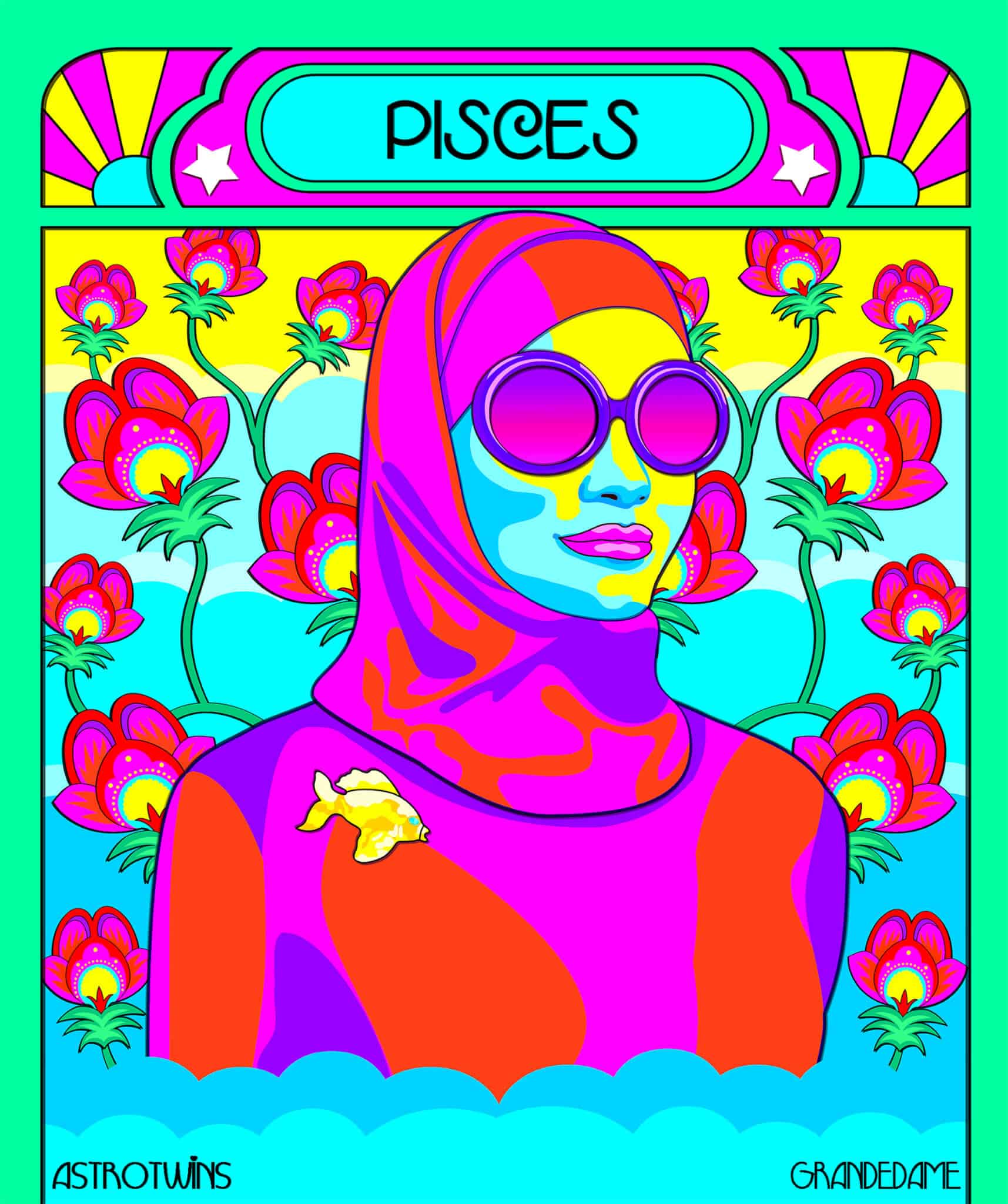 Float on! Pisces season 2022 begins February 18 as the Sun transitions into the sign of the ethereal, enchanted Fish. This divinely inspired cycle helps us cultivate compassion and create space to heal trauma.

The Sun visits a new zodiac sign every 30 days or so. During each “season” everyone feels the influence of the prevailing astrological energy. Pisces season 2022 begins February 18 and ends March 20.

Here are seven ways to deepen your divine connection during Pisces season 2022 while the zodiac’s dualistic fish directs our attention to buried secrets and heavenly dreams.

1. Look beyond the surface

Do you believe in magic? The dreamy vibes of Pisces season 2022 can make the most hardened cynic want to immediately enroll in a semester at Hogwarts Academy. Ruled by hazy Neptune, Pisces is a spellcaster. Take nothing at face value during this four-week cycle! Although the reality shifts can be mind-bending, don’t just rely on your five senses. Give credence to your intuition, spiritual experiences, and serendipities. Some will be so striking they seem to arrive as a message from another dimension.

Since you probably can’t prove these things on paper, don’t waste time arguing with the self-proclaimed “data nerd” in your family. But if something resonates for you intuitively, it’s worth exploring. Nowadays, it’s not uncommon to read with a book that the author channeled from a thousand-year-old deity or to consult your oracle deck before making a major life move. Go ahead and enjoy the messages of Abraham that flow through Esther Hicks or let that Wheel of Fortune card confirm your cross-country move.

That said, it’s a good idea to fact-check any assumptions, especially if money or wellness prescriptions are involved! It’s one thing to be skeptical (someone who considers all possibilities with one eyebrow raised) and quite another to be gullible—the twin pitfall of Pisces season.

2. Look through your third eye

Pisces season invites you to use a different sort of “vision” than pure sight. The third eye chakra, located at the forehead between the eyebrows, is often called the gateway to your intuition or sixth sense. Sparking this can help to clarify your purpose and enhance your creativity. But like all chakras, the third eye portal can become blocked. This may cause you to second-guess yourself and make ego-based decisions that can lead to unfulfilling results. You can help re-open your third eye by working with an energy healer or through your own meditation practice. Yoga poses such as forward folds, help to release tension in the shoulders and flush the pineal gland—restoring the flow of energy into the third eye.

3. Never forget that water is life

Neptune, the mythical god of the seas, is Pisces’ galactic guardian. During Pisces season 2022, the health of our oceans and water supplies becomes an ever-more crucial focus. It can be hard to digest some of the scary facts about melting polar ice caps and rising sea levels. If you’ve been avoiding these “inconvenient truths,” NASA’s climate website has extensive teaching tools that are presented more factually than emotionally.

Give the muse a seat at your table. While you’re at it, invite her into the recording studio and your dreams! Pisces season is like an extended vision quest. The veil is bound to feel thin during Pisces season 2022, making it easier to pick up “messages” from the ether. Sit down with a notebook and see what flows out of your subconscious. Known for its poetic prowess, this solar cycle could turn you into a regular Ntozake Shange…or Anais Nin who was born under this star sign. Keep a journal on the nightstand, as Pisces season can enrich your sleep and deliver divinely inspired messages through your dreams.

Do you keep hitting the same creative block? Check out Julia Cameron’s The Artist’s Way, a legendary guidebook for embracing your creative self. One of the most game-changing exercises is the practice of writing “Morning Pages.” This entails taking pen to paper first thing in the morning to free-write three pages of unfiltered thoughts. You’ll be amazed at how therapeutic this practice can be—and how many hidden gems get unmoored from the recesses of your mind in the process.

Expect this to be a therapeutic process, too! Pisces is symbolized by two fish swimming in opposite directions, making Pisces season 2022 a time to rise into higher planes AND go rolling in the deep. Don’t judge your work or try to achieve a masterpiece. Just make art for art’s sake…or healing’s sake!

Ruled by watery Neptune, Pisces helps us “go with the flow,” but that can be a slippery slope in some cases. During Pisces season 2022, you may be prone to excess, making it all the more important to bring awareness to how much you’re drinking and eating or how often you sacrifice sleep because you’re so consumed with a project—or you don’t want to leave the party. Hey, we all love to escape reality from time to time, but bear in mind that addiction falls under the domain of Pisces. “Just this once,” can be famous last words that undo months of hard work or, in extreme cases, create the kinds of problems no one wants to have.

Steer clear of triggering people and situations. In The Empath’s Survival Guide, author Judith Orloff outlines the many ways highly sensitive people can become self-destructive in order to numb the intensity of the signals they pick up. Reach for artist’s tools when the urge to self-soothe strikes. Adult coloring books have risen to popularity as a cathartic form of self-expression—or maybe just a way to keep our hands busy. We’re fans of the iPad Pro and Apple Pencil’s simulated artist-style pens and brushes and have incorporated them into our note-taking!

As the twelfth sign of the zodiac, Pisces governs the things we need to release—if only to lighten our own psychic loads. Have you been hauling around a grudge or tale of woe like an albatross? The Pisces Sun illuminates places where you’ve fallen into a victim mentality and need to change your tune. That’s not to invalidate legitimate trauma. The question is, can you reframe these experiences as soul lessons and a source of inner strength? Turn to healing circles, therapists, shamans and coaches—the experts who can help you view things through a more empowering lens. Your “wounds” may evolve into healing gifts, allowing you to one day support someone going through a similar struggle.

Is it time to extend the olive branch? Forgiveness is a gift that you can give yourself during Pisces season 2022, along with heavy doses of compassion. That doesn’t mean you have to invite every offending party back into your life or soften boundaries that need to be kept firmly in place. But it does mean accepting people (and situations) for all that they are and all that they are not—and finding some divine serenity therein.

7. Let yourself romanticize, too!

Despite all the intensity of Pisces season 2022, it’s also one of the most romantic and glamorous times of the year. Get ready for an early round of spring fever! Rose-colored glasses and hearts worn on sleeves are always in fashion during Pisces season. Caveat: Piscean energy can be so up-in-the-clouds that you can sometimes forget that you are bound by the principles of the Earth plane. Periodic reality checks would be a wise idea—and at least three advisors to consult before unleashing any wilder schemes. But don’t be so hard-nosed that you fail to enjoy the imaginative vibes that Pisces season brings!

Grande Dame (Tiff McGinnis) is a UK based multimedia artist. Apple, Facebook, MTV Networks and more have all commissioned her colourful visuals. She is a featured artist on Giphy. Many of her GIFS have gone viral reaching over 100 million views. Her style is heavily influenced by psychedelic cartoons, pinball, Art Nouveau, and more.

She has shown her work at galleries around the Globe, including 111 Minna, San Francisco. She collaborated with couture footwear designer Terry de Havilland, her designs appeared in Italian Vogue and even caused a viral sensation appearing in The Daily Mail. Recent projects include an animated short of the life and work of famed Southern Gothic Author Carson McCullers. She is a dedicated, creative maverick, with a keen eye for detail, and a color palette all her own.