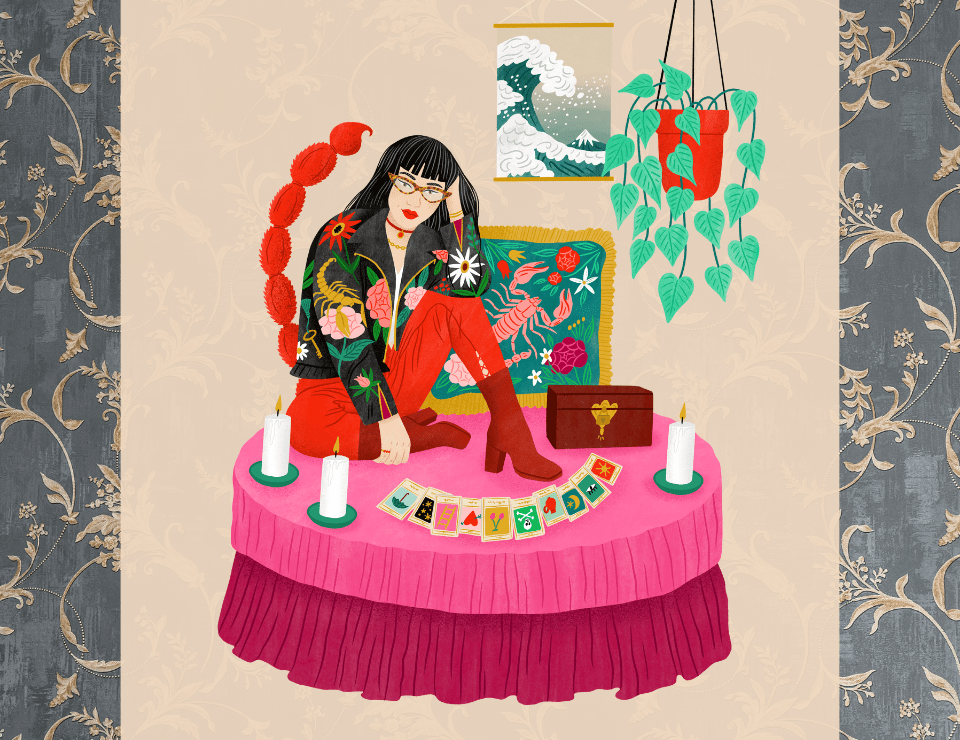 Ready for reinvention? Scorpio Season kicks off October 22. The Sun in this shape-shifting sign brings an air of mystery to the world until November 22. Focus your energy on intimacy, transformation and joining resources for the win!

Every 30 days or so, the Sun visits a new zodiac sign. During this “season” everyone feels the energy of this prevailing astrological sign, no matter what your Sun sign horoscope may be. Here is everything you need to know about Scorpio season.

When is Scorpio season?

Scorpio season begins October 22 and ends November 22 in 2022. It arrives right after Libra season and before Sagittarius season. Scorpio season includes Halloween! The start and end date of Scorpio season can vary by a day each year.

As lighthearted Libra season flutters into the rearview, we dive into the depths of a cosmic cycle colored by extreme passion. No more taking the safe middle-ground or avoiding conflict in order to be liked. Scorpio’s energy is about zoning in on a target. Think: power mergers, strategic alliances and all the mysterious and sexy things that happen behind closed doors.

Scorpio is a Water element and a Fixed sign

Scorpio is the second of the zodiac’s three water signs, along with Cancer and Pisces. If you want to ease into the flow of life instead of swimming upstream, the water signs act as a powerful current. These tuned-in, emotionally savvy signs remind you of the power of empathy and intimate connection. When a giant wave rolls in, you can’t help but be swept along.

Scorpio is also part of the “fixed” quality (or triplicity), which includes Taurus, Leo, and Aquarius. These star signs are about security, planting a flag in the turf and establishing dominance. People born under these signs are often hardworking, stable, and unafraid to take a strong position on issues.

Scorpio is ruled by Pluto, god of the underworld. The legend goes that the primary Greek gods—Jupiter, Neptune, and Pluto—drew straws to determine who would respectively rule the Earth, the ocean, and the underworld. Unfortunately, Pluto received the bad end of the deal and was compelled to oversee the domain of the deceased. Pluto is often depicted sitting on his throne with a two-pronged staff. Before Pluto was discovered in the 1930s, Scorpio was governed by Mars (along with Aries). Mars is now considered Scorpio’s minor ruler. Mars is the god of war who is depicted as charging forth into battle.

On the flip side, negative Scorpio energy can be obsessive, possessive, jealous, secretive, vengeful, cruel, calculating and manipulative.

What will Scorpio season bring?

Money, power, success! When the Sun heads into Scorpio for a month, it shines its high beams onto hidden financial opportunities. Instead of focusing on what you don’t have, get resourceful. A closet dig could turn up some valuable treasures to sell on vintage consignment. Maybe a neighborhood business needs a freelancer to help with social media posts.

During this magnetic solar cycle, energy flows where your attention goes. Scorpio governs long-term investments and joint ventures. Learn about compounding interest, crypto and real estate or set up a chemistry meeting with a prospective business partner. Seeking startup capital? Scorpio season is prime time to find the right person to put dollars behind your dreams. Think beyond the 9-5 grind—and not just because Scorpio season turns us all into night owls. You could hit an idea for a passive revenue stream, like a downloadable product or rental equipment, that makes you money in your sleep. (Even if you don’t hit the sack until the breaka-breaka dawn!)

Certain relationships may arrive at a crossroads. Are you in or are you out? Unpack the attraction slowly, allowing trust to build through private, one-on-one encounters. Rocky relationships (and never-ending situationships) will arrive at a crossroads under Scorpio’s “all or nothing” spell. Time to decide: Are you in or are you out? And if you are going to proceed, how can you revamp your relationship so that everyone feels safe and supported? Trust and lust are essential benchmarks during Scorpio season.

Details of our private lives are rarely spared in the digital age, but mysterious Scorpio loves to turn up the intrigue factor, cueing us to hold back a little. Take a break from documenting every meaningful moment on social media and let people wonder what you’re up to. A bit of FOMO can actually work to your advantage now. The power of suspense is a Scorpio specialty—suggestion, anticipation, the dangling of the proverbial carrot. Scatter a few clues and love notes, seduce people to follow your trail while you build their curiosity into a frenzy. They’ll be dying to know where the thrilling plotline leads!

If you’re a business owner, follow this same formula. Seth Godin’s classic book, Free Prize Inside: How To Make a Purple Cow, explains the concept of “the irresistible bonus.” During Scorpio season, you can put this principle to work—seducing people into buying that metaphorical sugary cereal with the toy buried in its depths.

Because if you think about it, it’s not the prize that creates the excitement. The thrill comes from the anticipation, the experience of ripping open the package, the moments before you find the crappy little plastic ring and shrug, “Oh well.” It’s the psychology behind those addictive unboxing videos. But don’t follow in the footsteps of those charlatans. Lean in to the competitive vibes of Scorpio and make sure the prize you deliver makes the search even sweeter!

During Scorpio season, a kiss is never just a kiss. Don’t kid yourself into thinking you can keep it casual. Exchanging energy—even a deeply penetrating eye lock—creates an invisible “cord” between two people. Before you gaze into the windows to someone’s soul, consider whether or not you really want to find out what’s really going on behind those velvet drapes. It might be best to look away…and walk away!

Since Scorpio is the sign of both jealousy and transformation, this is the perfect season to read new thinking about consent, non-monogamy, play parties and any of-the-moment trends around sex. The bold memoir, Future Sex by Emily Witt details a single woman’s foray into sex and sexuality in the Internet age from Orgasmic Meditation/OM-ing workshops to “Chaturbate,” to no-strings hookup attempts with friends. Or check out Esther Perel’s SXSW talk on the future of love, lust and monogamy.

A higher incarnation of Scorpio is the sharp-eyed eagle, which dives for its prey from the sky and rarely misses its target. So it makes sense to use this focused solar cycle for doing research or detailed work. What are you eager to learn? Plow through tutorials, watch YouTube videos, take a Skillshare class. During the next four weeks, you’ll have the focus you need to master your first guitar chords, edit a music video on an app or make your first larger-scale macramé wall hanging.

But watch out! While your one-track mind can give you incredible stamina, it can also take you off the rails. Don’t get SO fixated on your agenda that you miss other important cues. Too much introspection can stall the action and leave you stuck. If you find yourself overthinking, get up and move your body, ideally in a way that gets you hot and bothered. (Maybe it’s time to install that pole in your living room or the swing in your boudoir…)

In The Artist’s Way, author Julia Cameron suggests viewing jealousy as a “map” pointing to your true desires. It’s an intriguing way of looking at it, so don’t deny your intensity! And if you feel any shame about your reptilian brain responses, turn to Scorpio Brené Brown for a lesson on vulnerability. The trick is to be like an alchemist during Scorpio season and transmute negativity from lead into gold.

And don’t forget: The people who annoy us most can be our finest teachers. Does someone’s excessively loud voice push your buttons? Reflect on why that is. Maybe you don’t feel entitled to speak up or brazenly take up space as this person seems to. Challenge yourself to raise your own volume and ask directly for what you want. Once you let yourself be that squeaky wheel, you might find that this person no longer bothers you so much. Or, if they’re interrupting your work, sleep or personal space, summon the courage to ask them to respect your space.

5. Embrace the urge to merge during Scorpio Season.

Scorpio rules “other people’s money”—a somewhat misleading concept that suggests we should all start rifling around in someone’s wallet for a $20 bill they won’t miss. Forget petty theft, this is the time to pool resources. Strategic alliances, and combining your money, talent, time, energy—whatever you have in abundance—will create a mutual win-win.

Scorpio is masterful at refurbishing and remixing—taking the old lead and spinning it into gold, creating something fresh and new. This four-week cycle is meant for reinvention and manifesting, even if you’re making something out of nothing or turning trash into treasure with savvy upcycling. Yet another incarnation of Scorpio is symbolized by the golden Phoenix rising from the ashes. During Scorpio season you could even rise triumphantly out of something that felt like a loss, a waste of time or downright apocalyptic.

So sure, you might court some deep-pocketed and well-connected investors for your grand ideas, like Scorpio billionaires Laurene Powell Jobs, Wang Jianlin, or Bill Gates. But you could also free-cycle, potluck, crowd-source and mine the shared economy’s treasure trove. No money actually needs to change hands for you to tap into Scorpio season’s wealth-building powers. Heck, your Scorpio season mantra might as well be “never pay retail.”

Read your daily, weekly and monthly horoscopes for your sign

Artwork created for The AstroTwins by Bodil Jane