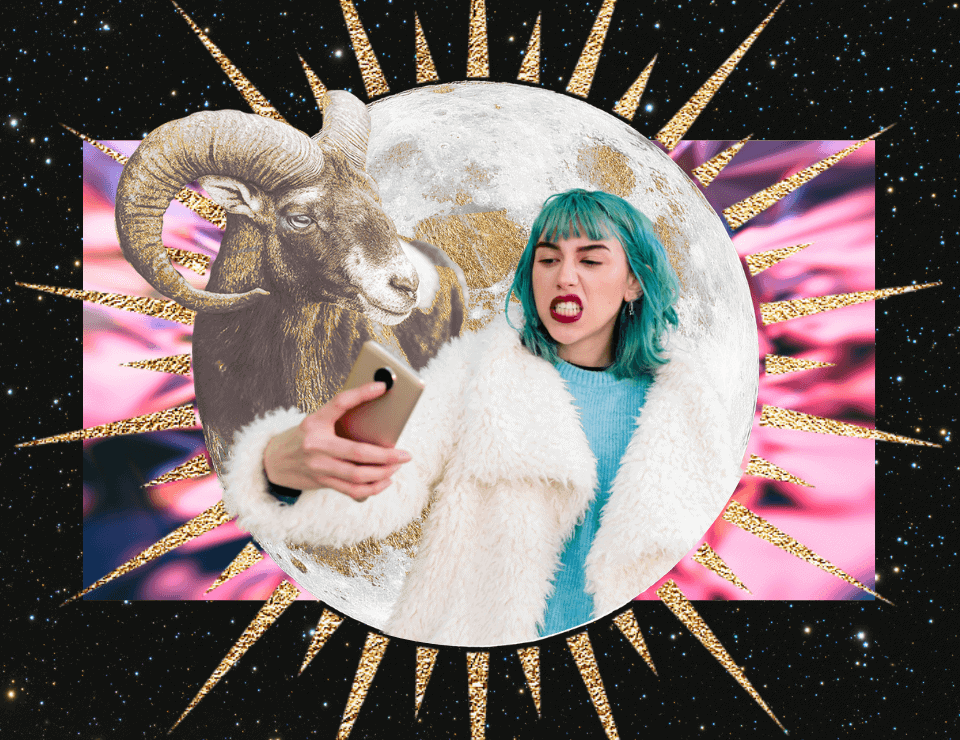 Set yourself to beast mode when the moon is in this assertive sign! The Aries full moon helps you declare your intentions. Plus 7 ways to soar toward those dreams.

The Aries full moon helps you claim your place in the winner’s circle.

Take a daring leap into the spotlight! A full moon in passionate powerhouse Aries supplies you with drive to achieve a personal goal or to let your solo star shine.

What is the meaning of an Aries full moon?

A project you’ve been working on for the past six months could hit a peak moment. But don’t wait to be noticed when show-stopping Aries is at the wheel. For this courageous, can-do fire sign, fearless self-promotion is the name of the game. Even if you’re not ready for a full-scale launch, trot it out for a beta test. But don’t play it too safe! Audience receptivity isn’t really the point of an Aries full moon. Just put yourself out there, unvarnished, fully authentic and 100 percent amazing—as YOU define it.

Competition could get fierce, but for best results, make room onstage for others to shine rather than fighting for headliner status. As you unleash your fierceness, beware! An Aries full moon may churn up a wave of buried anger. Hit the boxing bag, vent to a levelheaded third party, scream into a karaoke mic…just don’t escalate the drama!

Love and an Aries full moon

Want someone’s attention? Make it obvious during the Aries full moon! Heck, use a little shock value if you must. Capitalize on the courage that arrives courtesy of this lunar lift.

If you’re stuck in a comfortable groove, ignite magic by doing something unexpected. Surprise your sweetie with lunch, get a nail-art mani, post your creative work on social media (and @ your crush).

What will get your pulse racing? Novelty releases a sexy rush of dopamine, which can wake up a stale vibe. Tandem skydiving isn’t for everyone…but if it’s your jam, now’s your moment to jump!

A partner is optional during the Aries full moon, which resonates at the frequency of self-love. That, of course, is the base ingredient for any relationship, so no matter your status, shower yourself with adoration.

The Aries full moon appears during Libra season, between September 22 and October 23 most years.

Aries is symbolized by the Ram for its unstoppable tenacity.

Aries is a fire sign, along with Leo and Sagittarius

How does an Aries full moon affect me?

Aries rules the head, home of the brain. This full moon is an optimal time to “feed your head” with all kinds of mental stimulation.

If your brain keeps fixating on things beyond your control, distractions can be healthy. Try a microlearning experience to stimulate new neural pathways. Listen to a podcast series or find an online game to teach you to speak Spanish or learn about racial equity in a bite-sized way.

The beauty of today’s world is that you can keep your mind busy no matter where you are. The challenge, of course, is shutting it off. Good thing there are apps to help you do that, like Insight Timer or the aptly named Headspace that helps you meditate, de-stress and drift off to peaceful slumber.

As the first sign of the zodiac, Aries is never afraid to rip up the old model in order to draft a brand-new blueprint. Is there an area of your life that’s begging for an update? With climate change, the global economy in flux, and basic human rights threatened, you may desire to take charge and get involved. Anger can be a helpful touchstone under this full moon, connecting you to a powerful sense of purpose. Follow that inner calling and be a warrior for change.

Whether you’re spearheading a community initiative or figuring out a savvier system for leading the team at work, the rule is less talk, more action. The only thing the Aries full moon requires is courage. It’s not easy to go first, speaking up when everyone else is frozen with indecisions. That’s what being a leader requires and it’s something the self-possessed Ram can teach us under this activating lunar light.

The headstrong Ram can serve up a strong brew of confidence that might verge on swagger. Under this lunar spotlight, some serious egos may be on display. (Tweetstorm alert!) Know where to draw the line between confident and cutthroat, and when it’s best to just disengage.

Warning: Since Aries is the zodiac’s warrior, this full moon may churn up aggression and anxiety. Find a healthy outlet for release instead of getting sucked into a rage-filled comments thread. If you’re the type who has a short fuse, steer clear of triggering people. Under this cosmic “lunacy,” buttons are easily pushed, escalating a minor grievance into a bloody battle.

Burn off stress instead of burning bridges. Turn your living room into a dance floor or trek off on an adventurous day hike. Boxing workouts are great to release aggression under this full moon, so think about setting up a bag if you have space at home. If you’re up for the challenge, check out classes for Brazilian Jiu-jitsu or Krav Maga, a military-based training that teaches you how to defend yourself on and off the mat. Who knows? Being part of a virtual Fight Club could move all the pent-up frustration out of your body, freeing up life-force energy that’s maybe been stuck for awhile.

4. Ask and you shall receive

Know why certain people seem to always get the recognition and upgrades? Because they confidently ask. The Aries full moon is fired up in the zodiac’s most entitled sign, and it wants to speak to the manager—no, forget that; it wants to talk to the CEO! The universe can’t give you what you want if you don’t spell it out. And really, what’s the worst that could happen? You ask, and the answer is no? That stings, but you’ll recover—we promise. And if the answer is yes, boom! You’ve catapulted your life into its next dimension.

What bold request could you make? Instead of patiently waiting for a promotion, schedule a performance review. DM a venue about booking your band or host a workshop that would appeal to their audience. Simplify your pitch and get straight to the point. Brevity is the soul of wit when impatient Aries is at the wheel!

5. Promote yourself with pride

Aries energy is about shameless self-promotion and under this lunar light, have zero reservations about letting the world know how amazing you are. (Okay, even if you have a few, feel the fear and do it anyway.) What’s that passion project you’ve been obsessively cultivating since the Aries new moon, six months earlier? Whether you created something wholly original or put your own unique spin on a classic, the Aries full moon means you’re ready for a big reveal.

Not sure where to direct the attention? This full moon illuminates your ninja power. (Which might already be obvious to everyone except you.) Do people view you as a thought leader or influencer? Where do feel confident taking charge? If you’ve got enough experience under your belt, build a platform around your personality and teachings.

Even if your path is undefined, make the most of this bombastic energy by bravely experimenting with something that has always interested you. Don’t worry about what the finished product will look like, or when anything will be complete. Aries energy is more about getting started than wrapping things up anyway. Just start playing and create some traction.

Every zodiac sign is associated with a color and the Ram claims fire red as its hue. Like the qualities of Aries, red symbolizes survival, courage, and vitality. In the chakra system, red is associated with the first (root) chakra, which is stable and grounding—much like Aries can be when they rise into their leadership. If you’ve been hesitant about taking charge or want to reclaim your power, use “cosmic color theory” to fire up your world. Wear something red or place objects in this hue in your line of vision.

While most people can’t pull off head-to-toe crimson—except some of those Aries-Sun born headliners like Celine Dion, Elton John and Sarah Jessica Parker—it’s a potent pop color. Shoes, bags, lipstick…a burst of red can make any neutral outfit sing. If you need to energize a room, try painting a red accent wall or draping a woven red blanket over a chair. Not a red person? (Admittedly, we are not.) Hot pink, flame orange or purple can also evoke that Aries magic.

Check out our Style Horoscopes and Home Decor Horoscopes for inspo for your zodiac sign.

Looking to be done with something no longer serving you? The Aries full moon, the first fire sign of the zodiac—wants you to set it ablaze.

Cultures around the globe have used fire ceremonies to purge negative energy for thousands of years. This can be as simple as writing down what you’d like to be rid of, then striking a match under the paper. Or maybe you build a bonfire and toss in burnable items that you want to say goodbye to…yes, even if the farewell is bittersweet.

Fire destroys, but as it does, it cleanses. Visualize your pain being consumed and released as smoke, then disappearing into the ether. You might even hold a full moon fire circle with an intentional group.

Find out how the Aries full moon will affect your sign in our weekly horoscopes: https://www.astrostyle.com/weekly-horoscopes