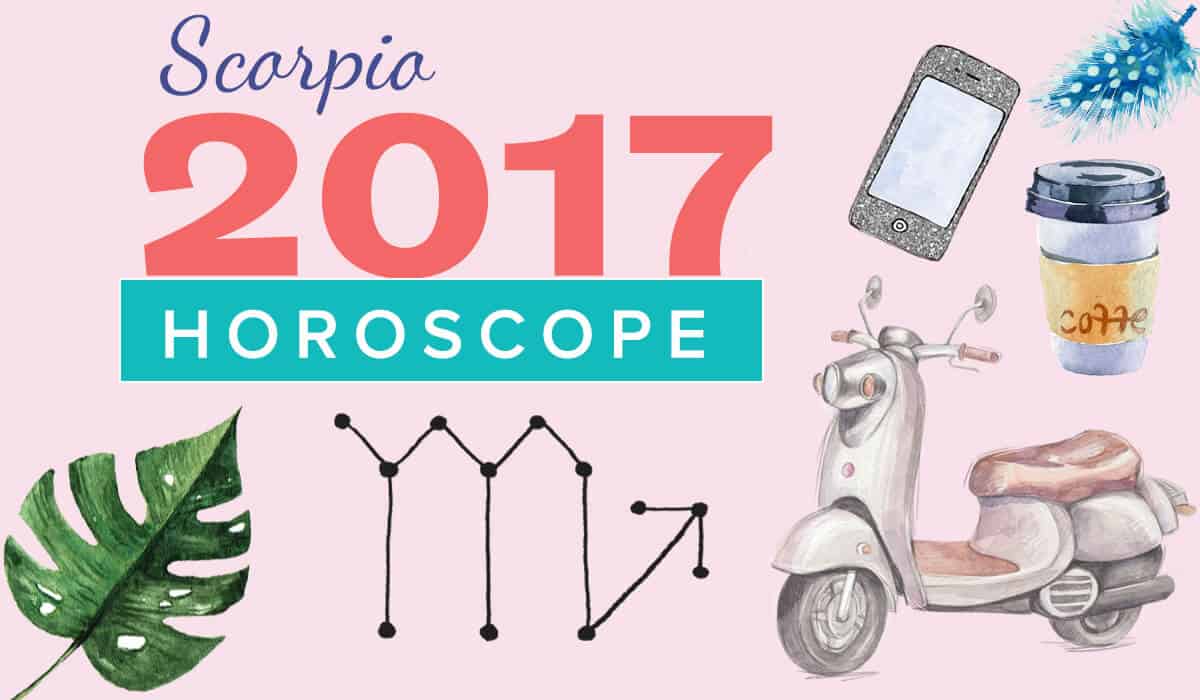 Your Scorpio 2017 horoscope: What’s ahead for your Sun sign?

Adapted from The AstroTwins’ 2017 Planetary Planner

Slow down, Scorpio. Ready or not, you’re entering a transitional year in 2017, as expansive Jupiter rounds out a 12-year trip through the zodiac. From September 9, 2016 until October 10, 2017, Jupiter will be in Libra, putting its growth-inducing spotlight on your twelfth house of closure, endings and healing. It will be a poignant time of powerful inner shifts, with spiritual and emotional evolution.

With expansive Jupiter in your dreamy and restful twelfth house, you may feel tired a lot of the time, as the vibe shifts from “fiesta” to “siesta.” This is your energetic signal to downshift and turn inward. Like it or not, you could be processing years’ worth of feelings or dealing with a situation that consumes a lot of your emotional energy. Someone close to you may need extra support—perhaps an elderly parent or someone going through a rough time. You might need to take a time-out to repair your own health, especially if you’re dealing with burnout or adrenal fatigue. Pace yourself, Scorpio, and be gentle.

While this might not jibe with your go-getter agenda, there’s a silver lining: On October 10, Jupiter will sail into Scorpio until November 8, 2018, kicking off a fresh 12-year life chapter—along with one of your luckiest years in over a decade. This is Jupiter’s first return to Scorpio since 2006, so you’ll want to clear the decks of any outmoded situations, paving a fresh path for Scorpio 2.0.

You can finally plant your oxfords on terra firma. But don’t abandon that new adventurous spirit you developed.

Meantime, there’s some real-life work to do. Structured Saturn is rounding out a three-year trip through Sagittarius and your second house of career, money and daily routines. You’ve been building a nest egg slowly and steadily, all the while learning important lessons about finances.

Scorpios can easily fall into tunnel vision, steamrolling their way to a goal. Serious Saturn forced you to slow down and take things one step at time. You may have revamped your spending, schedule and priorities to accommodate a saner, more balanced lifestyle. You’ll need that reprieve more than ever in 2017, as the stars prod you to organize your time and energy around the things that matter most deeply to you.

Luckily, Jupiter in Scorpio is all about YOU. This fall, turn your attention to personal goals and dreams you’ve shuffled to the back burner. Believe it or not, all of the struggles leading up to this moment will soon make sense. You’ll be rewarded for leaving toxic situations in the rearview as you move ahead into an enterprising new cycle. Jupiter’s last visit to Scorpio was from October 26, 2005 until November 24, 2006. Think back to that time—did you start something new or make a major move? You may see themes from that era repeating. Either way, set your sights firmly ahead of you—and let bountiful Jupiter light a brave new path.

Soulmate…or just an illusion? With Jupiter in your fantasy-fueled twelfth house until October, you could fall head over heels into an infatuation. You didn’t see this coming—and before your Scorpio control alerts have a chance to kick in, your heart could be hopelessly hooked. Do your best to conduct due diligence before getting swept too far away. Perhaps you HAVE met “the One,” but you can’t just go with your gut here. A late February Pisces eclipse powers up your romantic and passionate fifth house. Watch for speed bumps while Venus is retrograde in March and April, which could bring fighting, drama or the unceremonious return of an ex.

Keep a tight grip on your wallet, Scorpio. Taskmaster Saturn is in your work and money house until December, forcing you to be disciplined, mature and to make hard but important choices. It’s all about prioritizing, Scorpio. Cutting back a little now could pay off in the long run. But don’t stay in a dead-end job because you’re afraid of change. With Jupiter in your twelfth house of endings and transitions until October, outmoded situations will be cleared away anyhow. Eclipses in February and August will touch down in your career house, bringing amazing opportunities or major changes. The five-star news? On October 10, lucky Jupiter blasts into Scorpio for the first time in 12 years, kicking off your luckiest year in over a decade. Everything will work out in your favor from here, so circle that date in neon!

Ease up, Scorpio. Jupiter is swimming through your healing twelfth house until October, ramping up your need for sleep, downtime and bonding. You may deal with a health issue or have to play caretaker for a loved one who’s ill. Mourning a loss, doing forgiveness work or processing intense feelings could consume some emotional energy now too. You may enter therapy or recovery to break an addictive or self-defeating pattern. When Jupiter enters Scorpio on October 11, your energy levels soar to new heights. You’re baaa-aaack!

Codependent no more! It’s time to set clearer boundaries and cut the enabling. If you’re overly dependent on others, you may need to loosen your own grip. Let go, Scorpio. Your mantra for 2017: Live and let live. An August lunar eclipse in your home and family house could bring a move, a pregnancy or a lifestyle change.

Get your complete 2017 Scorpio horoscope from The AstroTwins:

The AstroTwins’ 2017 Planetary Planner is your horoscope guide to the entire year, with the most important dates and opportunities spelled out. Never miss a star-powered moment again! ORDER NOW > 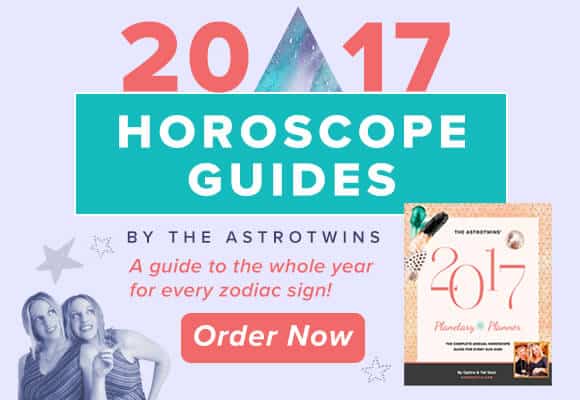